The cognitive dissonance is strong.

In a late Friday afternoon, holiday weekend news dump, the Biden administration, after months of delay, finally released its draft of the Outer Continental Shelf five-year offshore leasing program – but made no guarantees that when the plan is finalized it would actually include oil and natural gas lease sales.

Then, the very next day, President Biden posted a tweet complaining that gasoline prices are too high and attacked the small business owners who run most gasoline stations in America.

My message to the companies running gas stations and setting prices at the pump is simple: this is a time of war and global peril.

Bring down the price you are charging at the pump to reflect the cost you’re paying for the product. And do it now.

It’s just more of the same mixed messages from the Biden administration and Congressional Democrats who continued to block greater oil and natural production but at the same time lament about prices at the pump.

A Leasing Program Without Lease Sales?

When the Interior Department released its draft offshore leasing proposal on Friday, it was clear that the administration is seriously considering completely restricting all offshore oil and natural gas lease sales.

“The administration’s plan, if finalized, could allow up to 10 lease sales in the Gulf of Mexico and one lease sale in Alaska’s Cook Inlet, both areas where oil and gas production is currently taking place. But it would reserve the right to scrap those sales after it gathers input during a 90-day public comment period for the plan that would replace the five-year offshore drilling plan that expired on Thursday.” (emphasis added)

As Energy In Depth explained last week, managing an offshore leasing program without any lease sales would be like ordering a cheeseburger but requesting it without the meat, cheese, and bread.

And as Politico further reported, it would be an historic decision, and not in a good way:

“If the administration chooses to offer no lease sales, it would be the first time since the program began in 1980 that the government declined to put the waters off the Gulf of Mexico up for lease for oil production.”

Making matters worse, the draft proposal is just that: a draft. Meaning that the current five-year program expired last week while the new program is still under review. It means that Interior will go from late 2020 to at least 2023 without completing a single offshore lease sale, as the only sale offered was vacated by a judge, a decision which the Justice Department didn’t even appeal.

The Energy Information Administration describes the gasoline and oil price dynamic that is also demonstrated in the below chart:

“Retail gasoline prices are mainly affected by crude oil prices and the level of gasoline supply relative to gasoline demand. Strong and increasing demand for gasoline and other petroleum products in the United States and the rest of the world can place intense pressure on available supplies.” 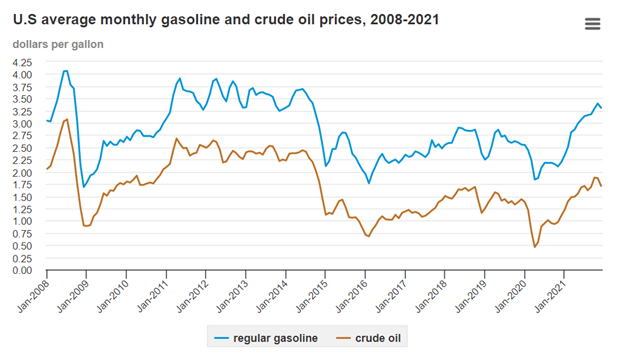 Unfortunately, President Biden is using this misguided messaging to attack the small business owners across America who own most gasoline stations, as the American Petroleum Institute discusses:

“When a station bears a particular refiner’s brand, it does not mean that the refiner owns or operates the station. The vast majority of branded stations are owned and operated by independent retailers licensed to represent that brand. According to the National Association of Convenience Stores (NACS), more than 60 percent of the retail stations in the US are owned by an individual or family that owns a single store.”

Environmental activist groups and fringe Democratic U.S. Senators have pressured Biden to block all leasing in the new five-year plan arguing that it won’t have any impact on gasoline price because of the long-term investment of these developments.

But the rhetoric is being called out by both the media and the industry for undercutting the confidence needed to build a sustainable and strong U.S. energy industry and is putting upward pressure on gasoline prices today.

“It doesn’t make financial sense. There are consequences when you say you don’t want things over the long haul. Businesses stop spending capex.”

In a Federal Reserve Bank of Dallas survey, industry leaders have disclosed that despite positive top-line numbers, oil and natural gas companies have needed to navigate several behind-the-scenes challenges to meet consumers’ and politicians’ production demands.

One industry executive identified the administration’s rhetoric as a major barrier for investment and confidence in the industry:

There is a massive disconnect happening in Washington, D.C. right now. The Biden administration and congressional leaders are constantly complaining about gasoline prices and demanding that station owners drop the price at the pump while at the same time working overtime to block new domestic oil production.