Report: Fracking Accounts for Less than One Percent of Total U.S. Water Use

A new report from the U.S. Government Accountability Office (GAO) examined the use of freshwater in the energy sector, specifically in hydraulic fracturing and thermoelectric power plants, as well as the current state of technologies being developed to reduce freshwater use.

To explore this issue, the GAO looked at total water withdrawals and total water consumption (i.e. “the portion of water withdrawn that is no longer available to be returned to a water source”). GAO’s examination included the fracking process and thermoelectric power plants, particularly in the most and least water-stressed regions.

Critics of fracking often claim the process uses a significant amount of water. However, the GAO report confirms that water withdrawal for mining (which includes fracking) is a comparatively small user. In fact, fracking doesn’t even account for one percent of total U.S water withdrawals, as the U.S. Geological Survey’s (USGS) graph below (included in the GAO report) clearly shows: 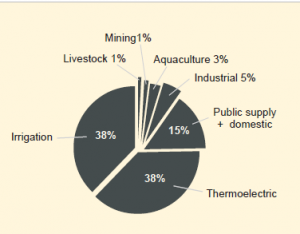 The amount used for fracking – and indeed all oil and natural gas development – pales in comparison to the 38 percent used for irrigation, and is only a fraction of what’s used for other domestic and municipal purposes.

New technological developments also suggest that even as the use of natural gas grows as a vital source of cheap energy, water use will continue to be managed effectively, especially during fracking. As the GAO report cites:

Additionally, the fact that fracking accounts for a minimal amount of total water withdrawals also holds true at the state level, even in the more arid climate and high extraction state of Texas, as a recent University of Texas Bureau of Economic Geology report found (which was also cited by GAO):

“The large number of hydraulically fractured wells in Texas (≥20 000) and high water use per well create the perception of large rates of water use. However, water use for shale-gas production is relatively minor (<1%) when compared to that for mostly consumptive irrigation (56%) and municipal (26%) water use in Texas in recent years” (emphasis added)

Low comparative water use for fracking is the reality in other states, too. In Colorado, for example, a joint report found that just 0.08 percent of state water was used for hydraulic fracturing in 2010. And in California, which is suffering from severe drought, water use in fracking is negligible. Anti-fracking groups recently pointed to a Reuters report from July that claimed fracking operations used 70 million gallons of water in 2014, but that was barely a drop in the bucket compared to the 35 billion gallons of freshwater withdrawals per day by California in 2010 as reported by a 2014 USGS study.

In conjunction with technological development, increased water management strategies, such as reuse and recycling of produced water or the use of more brackish water that is too salty for human consumption, further decrease the amount of freshwater used in fracking. Companies are even helping drought stricken farmers in California with the sale almost eight billion gallons of water last year.

The second half of the GAO report focused on water usage in the production of electricity. The GAO report shows that natural gas power plants are not only among the lowest water users, but are also a good option for helping to conserve water in drier regions:

This GAO report again confirms that natural gas – both its development and its use – is not a major consumer of water. Not only does fracking use a relatively insignificant amount of water each year, but new technologies and water management strategies are also helping to further reduce freshwater usage. Additionally, natural gas-fired electricity results in considerably less water consumption as compared to other conventional fuel sources, making natural gas an economical and responsible choice.