American families are saving a combined $203 billion annually in electricity costs thanks to increased natural gas and oil production, a new White House Council of Economic Advisors report confirms. These savings equate to approximately $2,500 per family each year, which means communities across the country are benefiting tremendously from affordable shale and the affordable resources it produces. 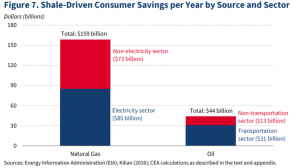 New well production per rig increased more than eight-fold between 2007 and 2019 for key shale gas regions and by over nineteen-fold for key shale oil regions, lowering oil prices by 10 percent and preventing 63 percent higher natural gas prices, the report found. These low prices are 46 percent lower than what was projected in 2018 and resulted in significant savings that were felt by American families in several ways, according to the report:

Because low-income households spend a larger share of their income on energy bills, lower energy prices disproportionately benefit them: shale-driven savings represent 6.8 percent of income for the poorest fifth of households compared to 1.3 percent for the richest fifth of households. These consumer savings are in addition to economic benefits linked to greater employment in the sector. As CEA explains:

“In other words, lower energy prices are like a progressive tax cut that helps the poorest households the most.” 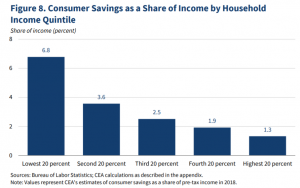 Not Everyone Gets to Enjoy These Benefits

While these benefits are impacting households across the United States, that isn’t the case everywhere. As the report explains:

The report compares New York with Michigan – another state in close proximity to the abundance of natural gas produced in the Appalachian Basin. As Figure 13 shows, as new pipelines came online that provided greater natural gas capacity in Michigan, the state’s natural gas price has dropped. In New York, however, where a blockade on new pipeline infrastructure continues, prices have risen. 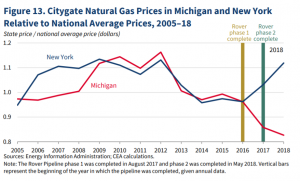 Perhaps the biggest takeaway from the White House report is that the cascading cost-savings from shale production are only just beginning. CEA concludes that electricity costs are expected to continue on a steady decline as more natural gas power plants come online, meaning that Americans will have more money in their pockets for decades to come.