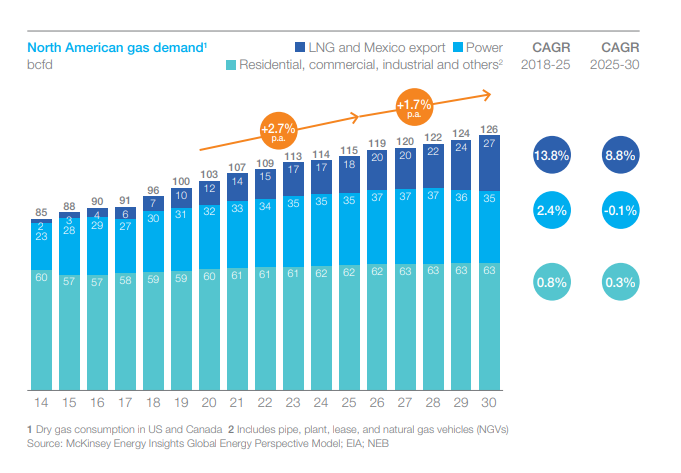 “U.S. and Canadian LNG projects are competitive, even in a long global LNG market, leading to utilization rate being maintained above 70 percent.”

The report explains that 60 percent of demand growth will be because of U.S. and Canadian LNG which is expected to grow to approximately 20 billion cubic feet per day (bcf/d) – or roughly 7.3 trillion cubic feet (tcf) annually – in 2030.

This is a truly significant growth prediction: Canada is in the process of building its first LNG export terminals now. Eighteen facilities had been proposed as of April, with three of those slated to become operational between 2023 and 2025.

The United States began exporting LNG from the lower 48 states in February 2016 and is currently the world’s third largest exporter, shipping 2.3 tcf of LNG in 2018.

The International Energy Agency recently forecast that the United States will be exporting roughly 4 tcf a year by 2024, overtaking Qatar and Australia to become the world’s top exporter of LNG.

In other words, McKinsey estimates that U.S. and Canadian LNG will grow by a whopping 217 percent from 2018 levels in a little more than a decade, and 82.5 percent in just six years after the United States secures its place as the largest exporter of LNG in the world, based on IEA’s calculations.

In addition to a burgeoning LNG export markets in the United States and Canada, McKinsey also forecasts that Mexican demand for U.S. natural gas, supplied predominantly by pipeline, will continue to “increase due to growth in the industrial and power sectors.”

U.S. natural gas supply will continue to be dominated by production in the Appalachian and Permian basin shale fields. These two resources “will supply approximately 53 percent of the North American market by 2030, and represent 83 percent of the [production] growth,” according to McKinsey.

In Appalachia, McKinsey sees production growing 6 percent annually, citing that the basin will be “debottlenecked in 2018 and 2019,” while production in the Permian “will increase by approximately 7.2 bcf/d from 2018 to 2030.”

McKinsey says these regions will overtake the production of other areas around the continent:

“Ongoing debottlenecking and capacity additions will cause shifting supply flows to 2035. After building out its midstream capacity in the mid-2020s, Appalachia will be able to increase production and ultimately supply 40 percent of the North American market— displacing the Western Canadian Sedimentary Basin and Rockies in the Midwest and serving the southern Mid-Atlantic—by 2030. However, ongoing associated gas production and ample supply in the Permian Basin will limit Appalachian flows south; the Permian Basin is expected to remain the primary supply source for the US Gulf Coast.”

This shift will also result in “increasing competition between WCSB and Rockies in the western market [that] will keep western Canadian prices low,” according to McKinsey.

As McKinsey describes, until 2009 the natural gas market remained relatively flat. But then U.S. “shale exploded from virtually nothing to become the driving force of gas supply,” “reshaping the North American gas supply outlook.”

Not only has the surge in shale production enabled North America to meet its own natural gas demand, but as McKinsey and others are predicting, as more U.S. and Canadian export facilities are brought online over the next few years, the North American LNG industry will become a world leader in supplying this abundant, clean resource globally.