The “Keep it in the Ground” movement has prevented at least $91.9 billion in  economic activity, eliminated nearly 730,000 job opportunities, and deprived federal, state, and local governments of more than $20 billion in tax revenue, according to a recent analysis of the staggering costs of activism in the United States.

The first-of-its-kind report by the Global Energy Institute (GEI) analyzes New York’s statewide ban on fracking, and 15 energy infrastructure, development and investment opportunities that were blocked, cancelled, or delayed due in some measure due to the Keep it in the Ground (KIITG) efforts, including the ongoing delay of the Keystone XL pipeline. 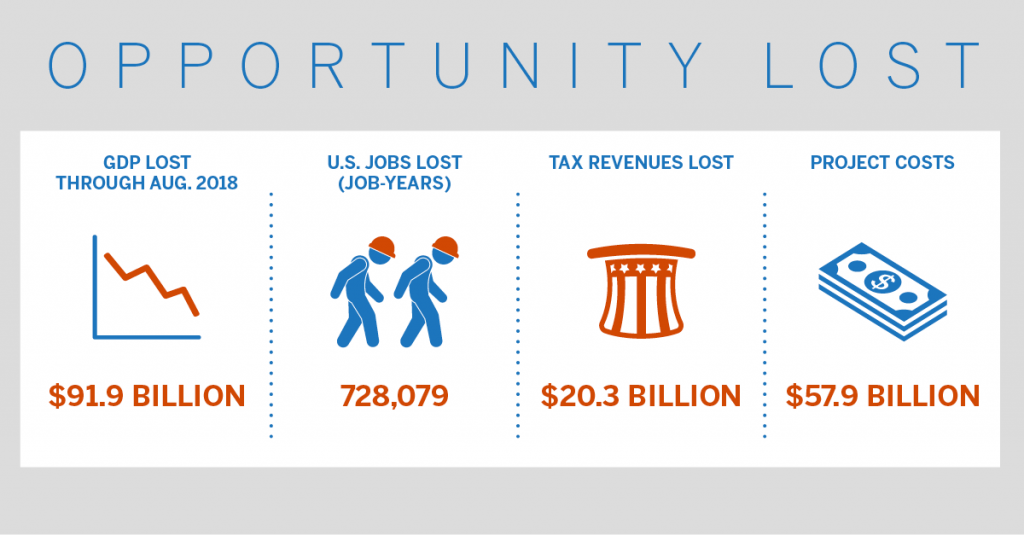 Details on the report’s methodology can be found here.

KIITG activists have worked to halt or postpone these projects through protests, countless lawsuits, and even vandalism of private property, all aimed at stopping development (EID has covered these efforts at length).

GEI’s report shows the real costs of their activities on specific oil and gas pipelines, export facilities, and states. 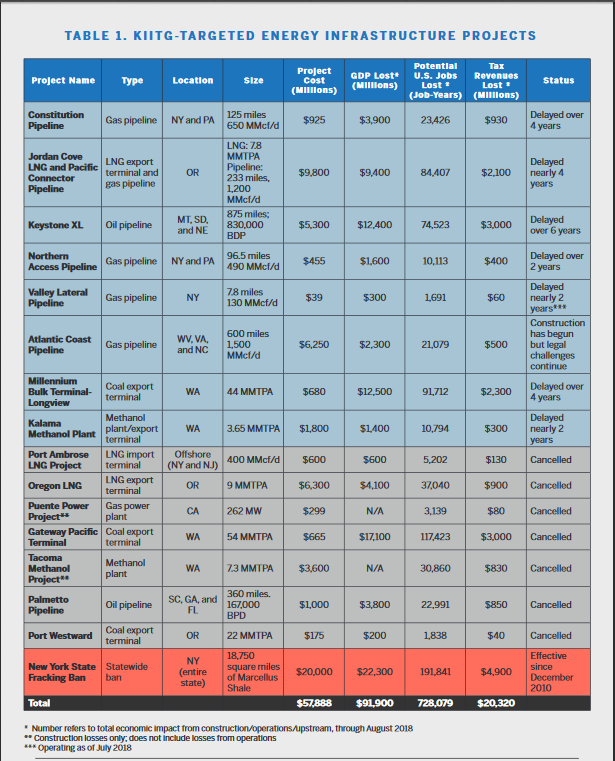 Source: Global Energy InstituteAs GEI president and CEO Karen Harbert explained, these substantial and far-reaching costs threaten both America’s standing as an energy-dominant country and the security of our nation’s families and workforce:

“America’s newfound status as a global energy superpower has created opportunities here at home and around the world, but in order to harness our abundant natural resources and innovation, we must have adequate infrastructure. Unfortunately, a small but vocal group of activists is waging fights against these projects around the nation. Our new report demonstrates just how damaging that is to families, consumers, and American workers.” 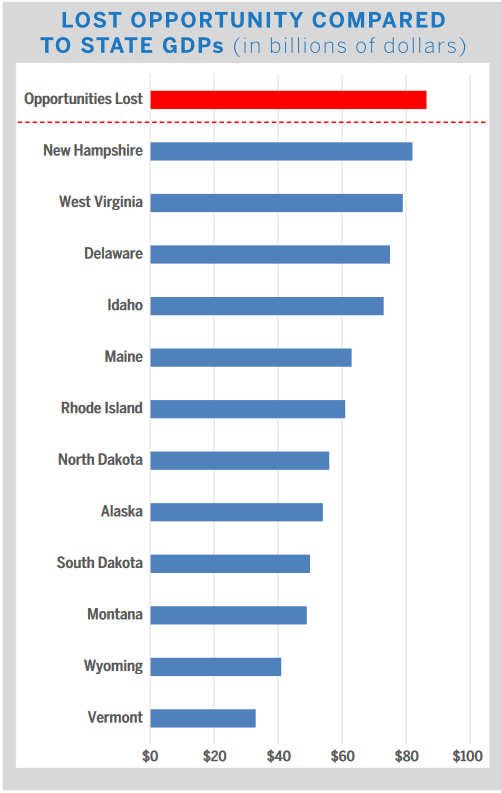 In addition, missing out on more than $20 billion in tax revenue will continue to have significant impacts on federal, state and local government budgets. These revenue streams – lost to KIITG-related delays and cancellations — would have allowed communities to increase funding for myriad civic programs and services including schools, hospitals, rehabilitation facilities and counseling programs, as well as job programs. 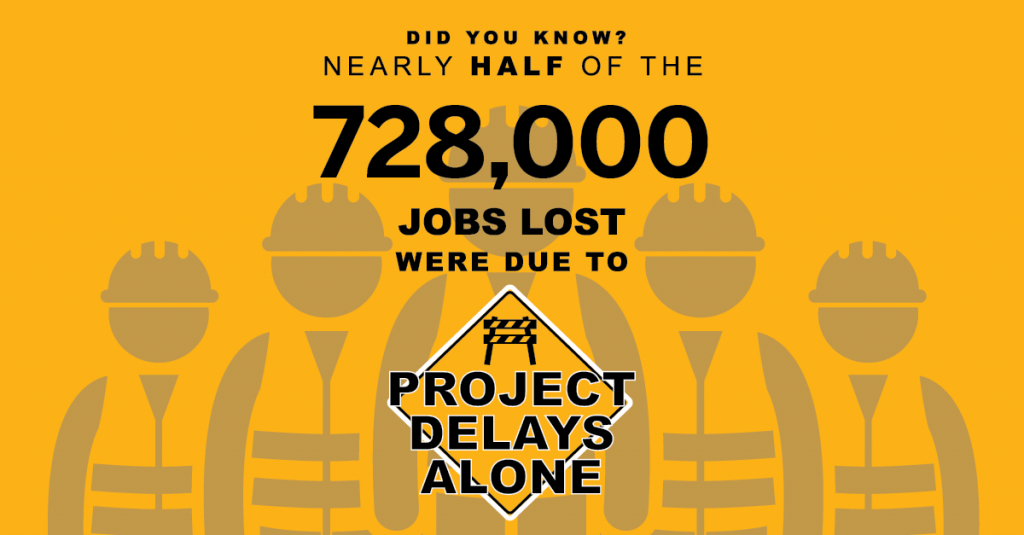 The study finds that project cancellations and delays have led to the loss of 728,000 job opportunities, representing a workforce larger than the population of Seattle.

Terry O’Sullivan, General President of the Laborers’ International Union of North America (LIUNA), emphasized the greater significance of the KIITG effort’s impact on the labor workforce:

“This new analysis by the Chamber’s Global Energy Institute underscores the economic damages being shouldered by the hard-working men and women who build our nation’s energy infrastructure. LIUNA members have the skills, training, and experience to build pipelines, power plants and terminals in an environmentally sensitive manner, and in cases where projects are being stalled we are literally standing by, ready to work.”

No state has had more jobs lost as a result of KIITG efforts than New York, where Gov. Andrew Cuomo dealt a staggering blow to the state’s labor force in 2014 by banning fracking. With a loss of 191,841 job opportunities, the ban effectively wiped out a workforce larger than the city of Syracuse. In stark contrast, neighboring Pennsylvania has experienced incredible economic growth due to shale development: From 2005-2017, state GDP contributions from the “mining, quarrying and oil and gas” sectors increased by 602%, a $597.5-billion gain for the Commonwealth. Over the same period, GDP gains in New York generated $52.6 million – a mere 9% of Pennsylvania’s windfall.

In the Pacific Northwest, six projects in Oregon and Washington targeted by KIITG groups – half of which have been cancelled – represent 372,236 potential jobs lost. These opportunities would have greatly complemented the states’ efforts to cut unemployment rates, which rank 30th and 41st, respectively.

And West Virginia – another state whose GDP is dwarfed by KIITG’s total lost economic opportunity – is poised to suffer more losses as activists recently halted the development of the Maryland segment of a pipeline designed to bring natural gas to the Mountain State and attract new industrial development.

The KIITG movement is actively seeking the spotlight as the 116th Congress kicks off and elected officials across the country begin the new legislative year. Coming off an election in which their priorities were rejected by many voters at the state and local levels, the KIITG movement will continue its pursuit to eliminate oil and gas development in the U.S., even trying out some new tricks along the way.

As KIITG activists seek to influence lawmakers in the months ahead, GEI’s report serves as a sobering reminder of the real human costs of their activities. Combined with an increasingly energy-educated public and the rise of the U.S. as an energy superpower (and leader in carbon emission reductions) it will go a long way to ensure lawmakers and policy influencers have a better understanding of activists’ motives as they look to influence Americans’ conversation on energy development.