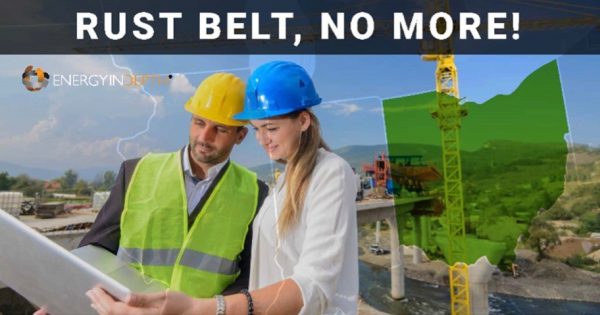 Nine months ago, EID reported on Acero Junction Inc., a then newly-opened operation making and shipping 19,000 tons of domestically produced steel on the Ohio River. The development of the Utica and Marcellus shale formations in the region brought the company to Mingo Junction, and with it, hope for a return of the long-absent steel industry that once reigned supreme in the region. Shale development was an “answer to a whole bunch of prayers,” according to Mingo Junction Councilman George Irvin Jr., because it held promise to bring about a rejuvenation of the industry, something then presidential candidate Donald Trump noted during a speech he gave at the Shale Insight conference in Pittsburgh:

Less than a year later, that promise continues to become a reality, as India’s leading steel company, JSW Steel, recently announced it was proposing a $500 million investment into Acero Junction. The move would allow JSW to acquire and upgrade the integrated steel plant, and would add hundreds of new, local, permanent jobs.

The direct connection to natural gas development and a steel resurgence is evident, with the company citing the proximity to the Marcellus and Utica shales as a driving factor in its decision to invest:

Last year, The Week ran an article titled, “Can President Trump rescue the Rust Belt?”, published along with a photo of a desolate, abandoned steel plant much like those that dotted the Ohio River.

The image captured an all-too-familiar scene in the region, conjuring the feeling of hopelessness felt by residents for years before shale development began in earnest.

As a local resident described the situation to the Steubenville Herald-Star, the plight of the Mingo Junction community was palpable:

“Over half the businesses are gone. No grocery stores, not even a gas station. We have nothing here anymore.”

However, thanks to tens of billions in shale-related development investments, and energy-intensive industries that spurred investments such as this $500 million steel plant, there’s now a feeling of optimism in the local communities.

Mingo Junction resident Therese Elder described the activity as “a blessing” and relayed a sense of grounded optimism to the Herald-Star:

“This time it’s real. You won’t see our guys on the streets, they will be working in the mill.”

The President of JSW Steel reaffirmed the sense of a steel resurgence in the United States, stating, “steel is coming back fast.” Indeed it is.

This resurgence of steel is tied to the United States having the lowest natural gas prices in the world—which is a vital component to energy-intensive industrial products such as steel.

This spring, Forbes ran a column titled “Could Shale Gas Lead To A Manufacturing Boom In Appalachia?”

Just weeks into summer, the evident answer is “yes.”

And to demonstrate how serious the Appalachian region or the so-called “Rust Belt” is about shaking its tarnished image, there’s a movement afoot to completely rebrand the region as the Shale Crescent USA. Why? Because, just like the local Ohio resident said, “This time it’s real”, and the people who live and work along the Ohio River recognize this once-in-a-generation opportunity to see an industrial revolution once again.