Tonight’s New York presidential primaries have thrown fracking into the spotlight. Democratic candidate, Bernie Sanders – the only candidate to oppose fracking – stands in opposition to much of his party and the majority of voters.  Senator Sanders ramped up the anti-fracking rhetoric first with an ad that was easily debunked by the New York Times, scientists and other Democrats. Now, the presidential hopeful is calling for the state to reject the proposed Constitution Pipeline in order to “break our addiction to fossil fuels, not increase our dependence on energy sources that pollute our planet.” Of course, the basis for the senator’s stance in opposition to the pipeline—and fracking—is horribly out of touch with reality.

Emissions have fallen thanks to fracking

Senator Sanders says, “The possibility of methane leaks from the proposed Constitution Pipeline would be catastrophic to our air and our climate.”

But that isn’t accurate. In fact, just this week there was an article in Forbes that described the exact opposite trend occurring just over the border in Pennsylvania where the Marcellus gas that will run through the Constitution will originate. The article says,

This 30% reduction in CO2 emissions per MWh over 10 years is actually better progress than what has been experienced in California’s power market, continually cited as EPA’s exemplar for other states to follow (here)….

So, despite not being blessed with the great sunshine and wind areas that California has, Pennsylvania has been lowering its CO2 emissions rate faster with shale gas.”

In other words, natural gas has been and will continue to be far from “catastrophic to our air and our climate.” In fact, it’s actually benefiting both, and that added health benefit as air improves has been especially evident in New York City. The “Big Apple” has the cleanest air in over 50 years, thanks to an increased use of natural gas from Pennsylvania’s Marcellus Shale. Former NYC Mayor, Michael Bloomberg, laid this out in a press release in 2013, stating: 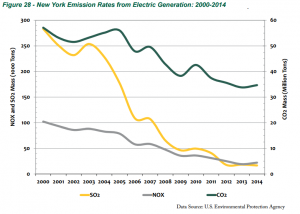 Senator Sanders goes on to say, “Our job is to break our addiction to fossil fuels, not increase our dependence on energy sources that pollute our planet…Building more risky pipelines that encourage the production of dirty fossil fuels is not the path forward.”

Perhaps he isn’t aware that despite New York’s ill-conceived ban on fracking, the state’s 2015 Energy Plan actually calls for a major increase in natural gas usage, with “approximately 97 percent of the natural gas supply required to meet the demands of New York natural gas customers is from natural gas supply production regions in other states.” New York State already relies heavily on natural gas with it accounting for about 34 percent of the state’s total primary energy use, and the 2015 plan calls for that amount to increase by an additional 32 percent by 2030.

Natural gas is a compliment to renewable energy, not an either or option

Of course, Senator Sanders has a “solution” to eliminating this much needed infrastructure, stating: “We need to move to a 100 percent clean energy economy.”

While that’s a great idealistic approach, it fails to acknowledge that first as previously mentioned, natural gas is actually a major part of that clean energy economy, and second, renewables and natural gas go hand-in-hand. Even the solar industry has stated this,

“Natural gas and renewables complement each other very nicely … I think it’s important to recognize that these industries, although we do compete, are working together to address some of the most pressing energy needs in the country.” — (Rhone Resch, CEO of the Solar Energy Industries Association, January 2013)

Further, New York already recognizes this through Governor Cuomo’s call for an expansion of clean energy projects that rely heavily on natural gas. The plan highlights 53 combined heat and power – also known as co-generation – projects across the state. Co-generation is a technology that typically uses natural gas to produce both electricity and heat to achieve greater energy efficiency. According to Gov. Cuomo’s press release:

The following were listed in the press release as benefits associated with the co-generation projects:

Terry O’Sullivan, general president of the Laborers’ International Union of North America (LIUNA) had an opinion piece featured in the Syracuse Post-Standard over the weekend that further explained just how out of touch the senator is when it comes to meeting New York’s energy needs:

“How? Let’s look at the numbers. First, over the next decade and a half, demand for power is projected to increase by 14 percent. Second, New York’s James A. FitzPatrick nuclear energy plant in Oswego will close in 2017, eliminating enough carbon-free power from the grid to serve 650,000 homes. And Gov. Andrew Cuomo wants to close New York’s three remaining coal plants by 2020, which is notable in terms of reducing carbon pollution but also removes the energy needed to power 416,000 homes every year.

What does this mean? Research conducted as part of a broader study underway by the Laborers’ International Union of North America (LIUNA) has found that New York will face a drastic energy shortfall of 29 million megawatt hours of electricity, or the equivalent of lights out for 2.4 million New York homes.

How do we make up this energy shortfall while also meeting clean energy goals? Renewables certainly must play a part, but by themselves they are not nearly enough. To fill the 21 percent deficit in the power sector alone, New York would need 100,000 acres of solar panels – or an area six times the size of Albany.

Sanders says he wants a clean energy future, yet he rejects the best method for producing cleaner burning local natural gas and has no plan to replace the carbon-free power from the Indian Point nuclear energy facility – which supplies New York City with 25 percent of its electricity. He only wants investments in solar and wind, which while promising in the future, does not produce energy when the sun doesn’t shine and the wind doesn’t blow. In fact, Sanders’ own campaign website doesn’t mention how we will power New York, and for that matter, the country, while waiting for his clean-energy utopia.

It’s time for a fact-based conversation on New York’s energy needs. And contrary to what Sanders says, natural gas is the most viable, abundant and economical solution to meet future electricity needs and the carbon emission reduction targets.

Bottlenecks in New York’s approval process are holding up critical natural gas projects, such as the Constitution pipeline and Access Northeast – projects that will help New York meet their clean energy needs.

Fully two thirds of New York’s clean energy requirements could be met by using natural gas: without it, there is not a realistic scenario for meeting these goals. It’s time for New Yorkers to ask Senator Sanders how he plans to keep the lights on.” (emphasis added)

Constitution Pipeline will generate much needed jobs and millions of dollars in income, revenue and taxes.

In an opinion piece, Senator Sanders also said, “The time has come to fundamentally transform our energy system away from fossil fuel and toward clean sources of power such as wind, solar and geothermal. And by doing this, not only will we create millions of new jobs, we also will save our planet in the process.”

But he doesn’t actually say where those “millions of new jobs” will come from. Yet this is something that every report for new infrastructure for the oil and natural gas industry includes. From the Constitution Pipeline’s website:

“This vital energy infrastructure project will provide over 1,300 desperately needed local construction jobs while helping support nearly 1,000 indirect jobs in these counties. This project is expected to create nearly $130 million dollars of new local payroll in areas of the state that need it the most.”

But jobs aren’t all that the Constitution will generate:

“The project is expected to generate $17 million in new sales and income tax revenue. Constitution Pipeline projects to spend about $683 million during the initial three year planning and building process, approximately $166 million of which would directly benefit the five county region. Once operational,  the pipeline’s economic impact is anticipated to result in $13 million in new annual sales, income and property tax revenue and more than $600,000 in new income in the region.

And that’s just the jobs and tax revenue, that doesn’t even touch on the $116,000 the project already gave out in grants last year—and more in previous years—to benefit local communities.

One has to wonder, in addition to the much needed natural gas for heating and electricity, where does the senator propose those jobs and monies will come from if New York does in fact reject the pipeline? New York needs a fact-based discussion on natural gas. After all, hasn’t the state suffered enough from anti-fracking rhetoric?