The Sierra Club — the same group that once touted the benefits of natural gas as a bridge fuel  —released a report recently attacking natural gas as “another filthy fossil fuel,” claiming that if natural gas-fired power plants are built, “America won’t be building a bridge, but rather a superhighway to climate disaster.” There’s one big problem with this line of thinking — based on scientific analysis and facts, it’s, quite frankly, wrong.

The report includes a list of planned natural gas-fired power plants across the country and claims,

“If all of the units identified were to be built, these new gas units alone could emit an amount of carbon dioxide pollution corresponding to more than 15% of 2016 electric sector emissions. The highest end estimates would be “game over” for our planet’s climate, and foul our air and water to unacceptable levels.”

That’s a pretty scary prediction — but it doesn’t align with what’s actually occurring as a result of the transition to more natural gas facilities across the country, as the following EID chart shows: 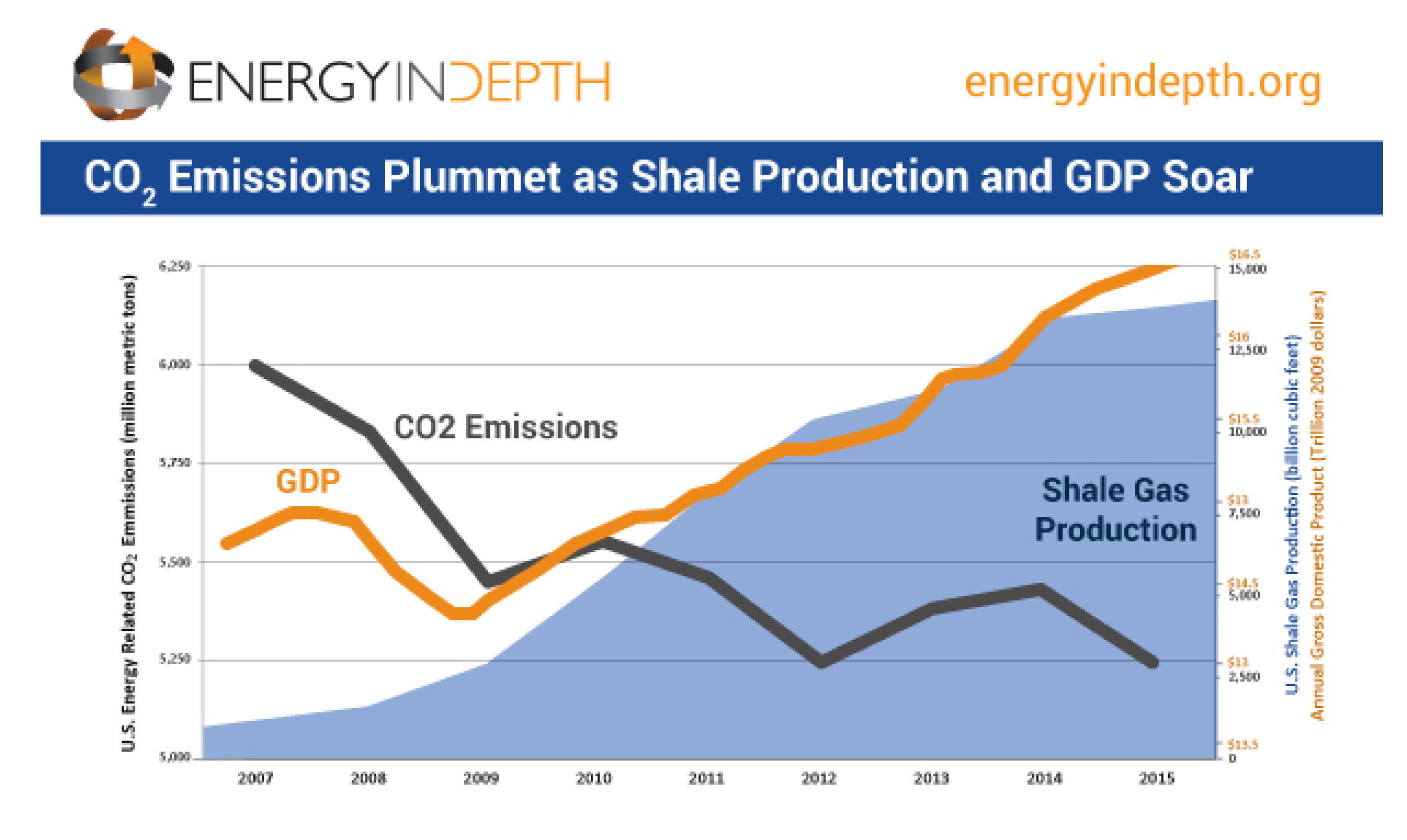 In fact, the United States was the only major country in the world to significantly reduce its greenhouse gas emissions (GHGs) from 2005 to 2014: 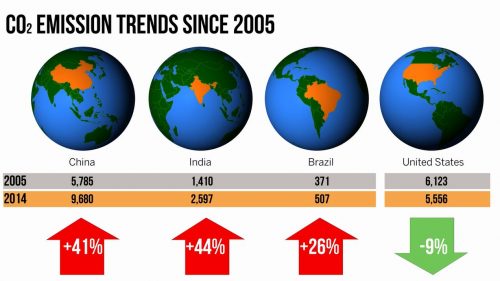 Despite the fact the Sierra Club actually tried to take credit for these GHG reductions in 2015, when CO2 emissions dropped two percent, it actually occurred in large part because of the switch to natural gas in the power sector. 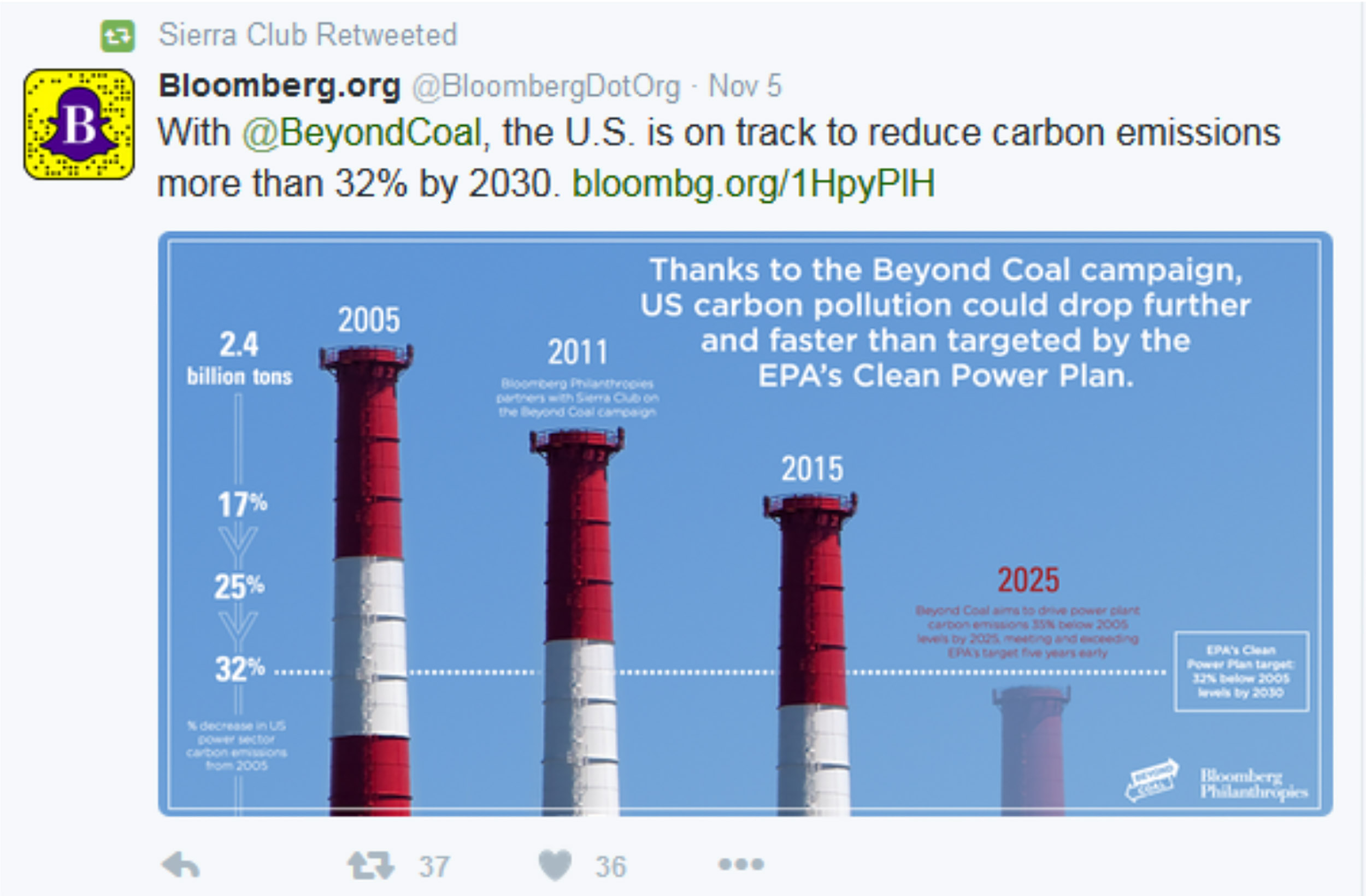 As the International Energy Agency (IEA) stated for the record last year: 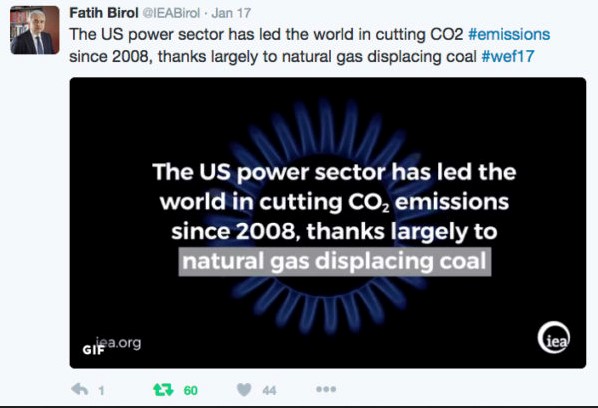 To illustrate this point, the U.S. Energy Information Administration (EIA) reported that between 2006 and 2014, natural gas prevented 1.25 billion metric tons of carbon dioxide from being emitted from power plants in the United States. By comparison, the use of renewable energy has prevented 789 million metric tons of carbon dioxide, according to the EIA. 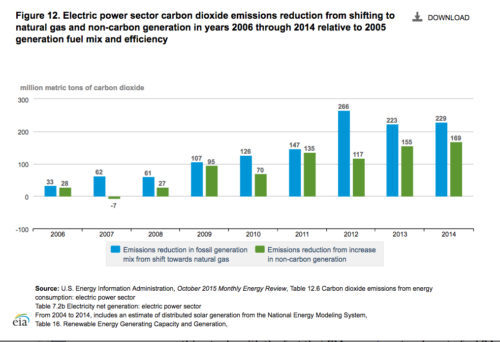 “In 2014, just drilling for oil and gas within the United States released 9.8 million metric tons of methane, or the equivalent of more than 71 coal-fired plants being operated for one year.”

Sierra Club points out in the report that more than half of the new natural-gas fired electricity generation capacity is concentrated in just five states: Texas, Pennsylvania, California, North Carolina and Virginia. Texas and Pennsylvania are the top two natural gas producing states in the country — meaning they each have an abundant supply of the resource in close proximity to meet demand.

Looking at just Pennsylvania, transitioning to more natural gas facilities was a no brainer when the closure of coal plants actually caused a power shortage in the state, as Forbes reported in April 2016. 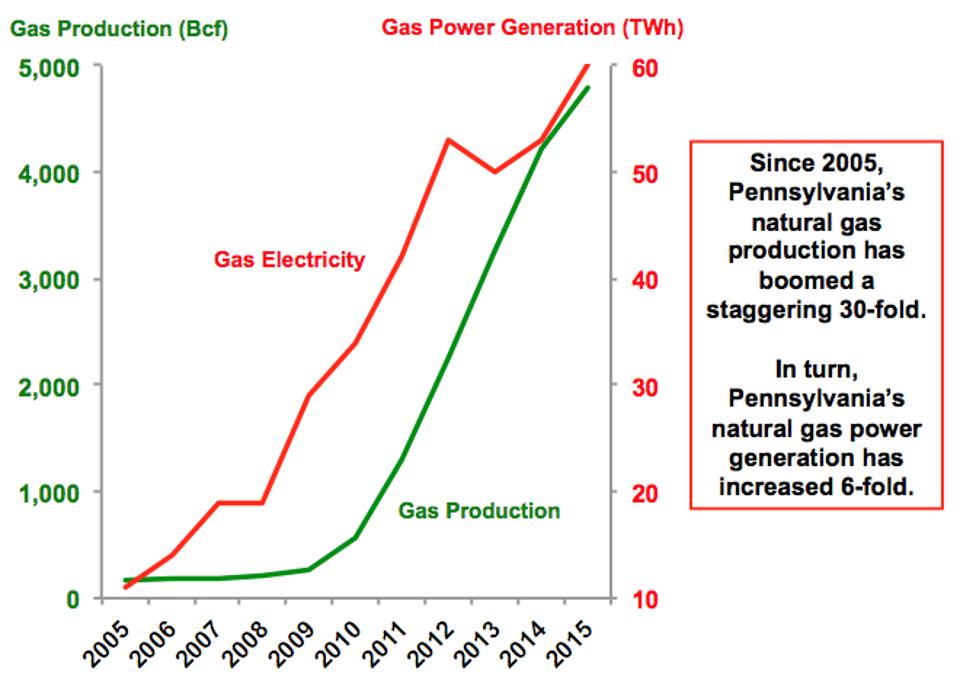 “Gas operations cannot be made safe for our climate or public health, and the growth of pipelines and power plants would further pollute our air and water, fragment habitats, and threaten communities throughout the country.”

Now, if that were an accurate depiction of what occurs from shale development and the increased use of infrastructure, one would expect a state like Pennsylvania — which is the second-highest producer of natural gas in the U.S. and has quickly added natural gas-fired electric capacity, pipelines and other infrastructure in the last decade — to be a prime example of this. But it isn’t.

This 30% reduction in CO2 emissions per MWh over 10 years is actually better progress than what has been experienced in California’s power market, continually cited as EPA’s exemplar for other states to follow (here). Since California first installed its Renewable Portfolio Standard in 2003, the state’s CO2 per MWh has surprisingly stayed at around 630 pounds, even increasing in some years (see EIA data, here). And Pennsylvania has tremendous room for natural gas growth: gas is only about 30% of Pennsylvania’s power generation, compared to over 60% in California.

So, despite not being blessed with the great sunshine and wind areas that California has, Pennsylvania has been lowering its CO2 emissions rate faster with shale gas.” (emphasis added)

In other words, Pennsylvania is a prime example that gas operations can be made safe for our climate and public health.

“In order to build the amount of gas capacity currently being proposed, the fossil fuel industry would have to invest over $110 billion dollars in capital, plus hundreds of billions more in fuel costs. That money would be far better spent on projects that directly benefit consumers, like rooftop or community solar and energy efficiency. That amount of capital investment could cover the entire upfront costs of over 5.5 million rooftop-solar systems. Alternatively, it could be enough to pay for up to the next two decades of efficiency programs.”

But that concept isn’t realistic, even in states where there has been serious effort to increase their renewable portfolios. For instance, while Texas is the largest producer of oil and gas in the U.S. and, according to Sierra Club’s report, accounts for one quarter of the new natural gas-fired electric capacity being added to the grid, the state is also leading the way on wind generation. As Forbes reports:

“Texas though wisely has a very diversified power portfolio that maintains critical reliability as more and more wind is added. A massive local supply of natural gas, for instance, can help backup Texas wind power when the wind isn’t blowing. Gas peaker plants stand ready to be immediate backup power that can go from stop to full power in 10 minutes and shutdown when the wind starts blowing again.”

California, which also tops Sierra Club’s top-five list of states with the largest increase in natural gas-fired power plants, is leading the country in solar generation. And even Pennsylvania has called for 18 percent of all electricity to come from renewable sources by 2021.

But they all still need to add that natural gas-fired capacity despite making monumental strides in renewable growth, because as Rhone Resh, CEO of the Solar Energy Industries Association said in January 2013:

“Natural gas and renewables complement each other very nicely … I think it’s important to recognize that these industries, although we do compete, are working together to address some of the most pressing energy needs in the country.”

In fact, as a recent National Bureau of Economic Research working paper pointed out, renewables absolutely must have natural gas as a backup to be a viable energy option, due to the fact that the sun doesn’t always shine and the wind doesn’t always blow.

This is just one reason a complete renewable transition is impracticable at the moment. In 2013 scientists at Stanford, Cornell and the University of California at Davis released a paper that suggested the state of New York could generate all of its energy from three sources: wind, water and solar. The $110 billion estimate for natural gas infrastructure that Sierra Club mentioned in its report wouldn’t even cover a third that report’s whopping $382 billion price tag by 2030, according to calculations done by Bloomberg. As Bloomberg further observes:

“The findings cast doubt on the ability of the state to eliminate oil, natural gas and coal from its energy supply. The Cornell proposal would require onshore wind turbines covering an area 3.3 times the size of New York City’s five boroughs.

“It’s too ambitious by 2030 to replace all the state’s power with renewables, although big progress could be made,” Angus McCrone, a senior analyst at Bloomberg New Energy Finance in London, said. The projections, he said, look “unrealistic” for individual technologies.” (emphasis added)

In the meantime, natural gas is helping to pave the way for more renewable energy, and lowering emissions at the same time.

The report closes with a brief discussion on the potential job creation from a 100 percent renewable transition, but in doing so cites a 2015 study that estimated a switch to renewables by 2030 would create roughly 4.3 million direct jobs. While that would be incredible, a review by Energy In Depth found that it would actually result in a net loss of around 1.2 million jobs. 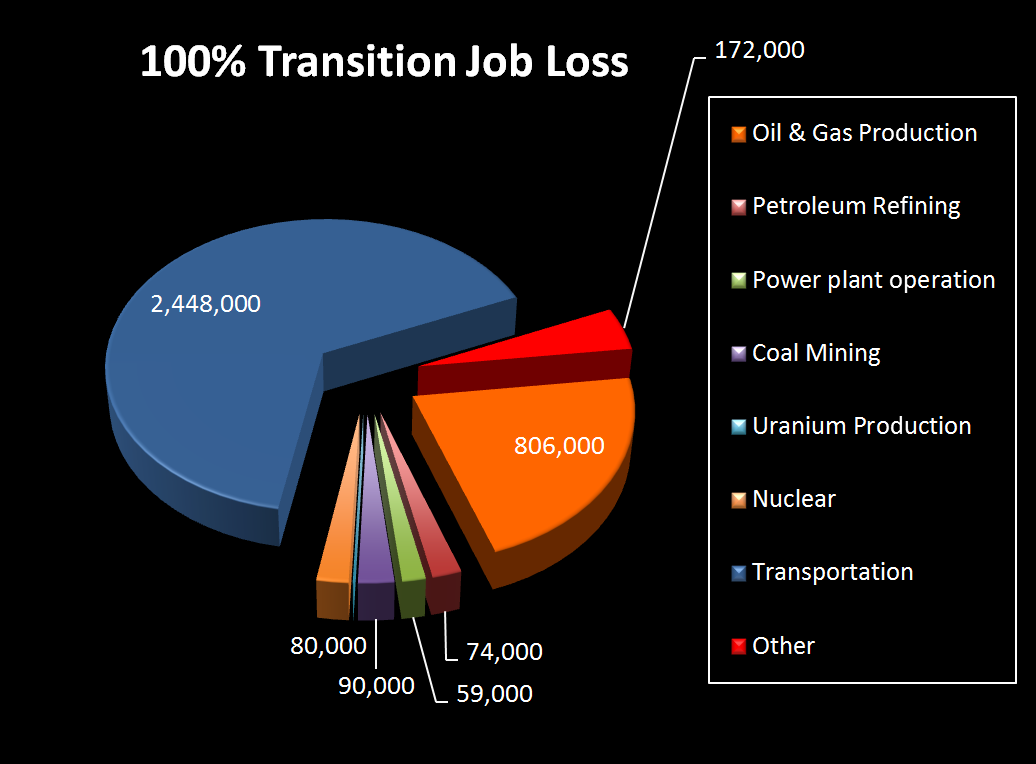 When EID questioned the lead author on the data, he actually scrubbed the website removing any data that showed job losses. That’s not to say that there won’t be jobs created in the renewable industry, and that this isn’t already happening — but to completely transition would impact millions of jobs across the country for American workers, especially in the oil and gas industry.

Case in point: the report even notes,

“It is crucially important to pay close attention to creating union and family-wage jobs — job quality in the clean energy industry is highly variable from region to region.”

Sierra Club is right — we do need to pay attention “to creating union and family-wage jobs.” And these natural gas-fired facilities are doing just that. Take Ohio for example. Though it is not one of the top-five states listed in the report, the Buckey State happens to be where all the U.S. natural gas-fired power plants currently under construction are being built with union labor, creating millions of man-hours throughout the state.

Imagine what that will mean in states like Texas, Pennsylvania, California, North Carolina and Virginia, which make up more than half the new capacity being proposed.

In its effort to “keep it in the ground” when it comes to any and all fossil fuels, Sierra Club has placed ideology ahead of facts and the American consumer that relies on affordable electricity options. The transition to renewable energy does not have to come at the expense of other industries, and a more realistic approach to such a transition does not mean that the environment is being jeopardized. Natural gas has proven that point consistently over the last few years.

All this report does is create undo alarm over a crisis that doesn’t exist in order to push this false reality that in order to have renewable energy, there can’t be fossil fuels. That kind of mentality is wrong, and is a disservice to the advancement of diversified energy portfolios.