A new Stanford University study released this week predicts induced seismic activity in Oklahoma and southern Kansas will continue to decline over the next three years, further confirming that current wastewater disposal mitigation policies have been effective. Study authors Mark Zoback, Cornelius Langenbruch and Matthew Weingarten note that “even without additional injection rate reductions” their physics-based model indicates “a further decrease of the seismic hazard in 2018, 2019 and 2020.”

The study goes on to note that the research “underlines the effectiveness of injection rate reductions, which slow down the rate of pressure increase at seismogenic depth.”

As EID has previously reported, Oklahoma’s monthly average of “felt” earthquakes (magnitude 2.8 or greater) at the midway point of 2018 was 76 percent below the monthly average in 2015, when seismic activity peaked in the state. In February and March of 2016, the Oklahoma Corporation Commission (OCC) issued directives to reduce wastewater injection into the Arbuckle formation by 40 percent below 2014 levels in the state’s two most seismically prone areas — central and western Oklahoma. The Stanford report notes that, “Compared to peak injection rates, a reduction of about 50% was reported through March 2018.” Not coincidentally, seismic activity has declined dramatically at the same time, even as oil production in the Sooner State soars to record levels. 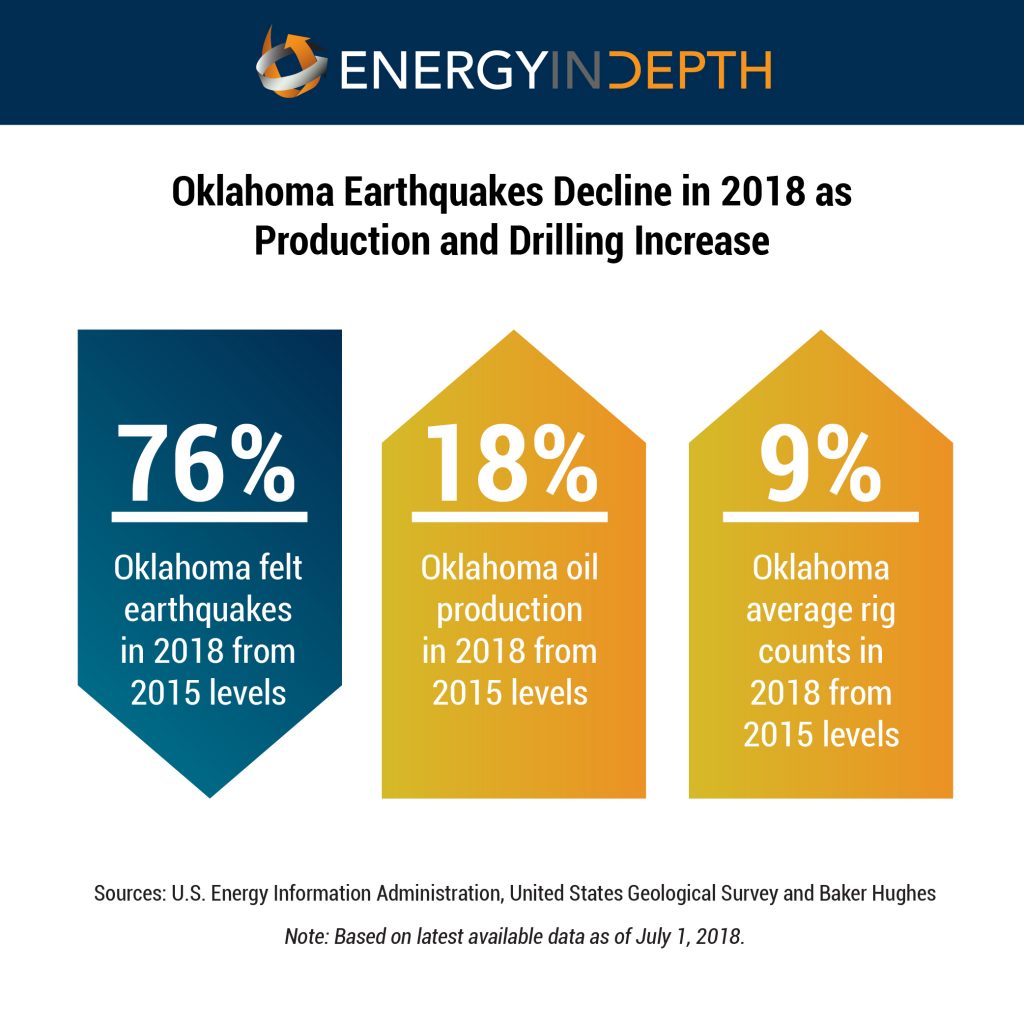 The Stanford researchers expect this trend to continue, as pressure rates from wastewater injection continue to diffuse and decline,

“If current injection practices continue, earthquake hazards are expected to decrease slowly. Approximately 190, 130 and 100 widely felt M ≥ 3 earthquakes are anticipated in 2018, 2019 and 2020, respectively, with corresponding probabilities of potentially damaging M ≥ 5 earthquakes of 32, 24 and 19%.”

The research team’s findings carry significant weight considering they accurately forecasted a 58 percent decrease in M-3.0-or-greater earthquakes from 2016 levels in 2017.

As the following graphic from the study shows, the researchers’ model – based on wastewater disposal data into the Arbuckle formation and seismic data from the study region over the past several years – also allowed the researchers to map out the likelihood of seismic activity in specific regions, clearly showing seismic risk declining significantly in most regions of Oklahoma moving forward. 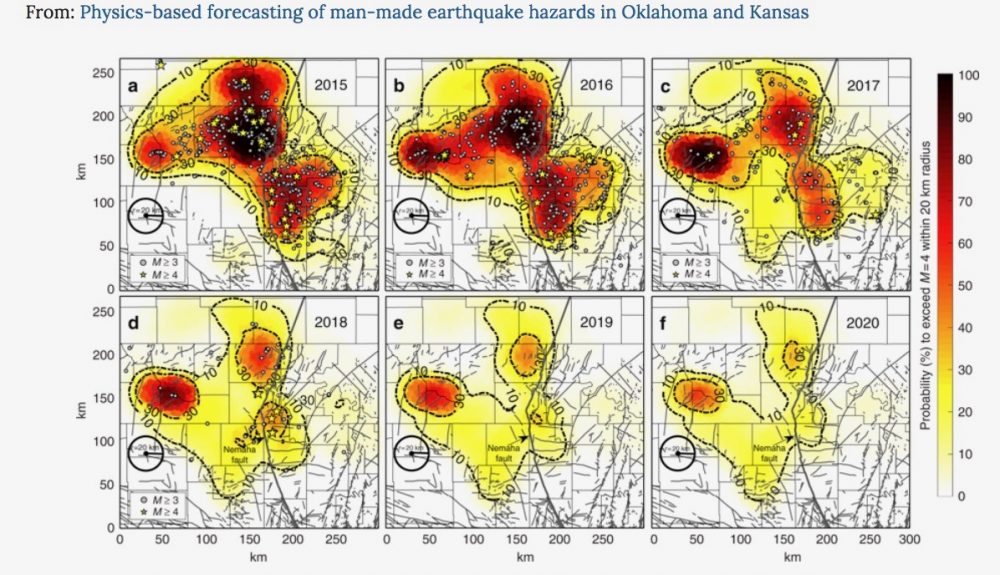 As Zoback explains in the study’s press release, regulators can use the methods employed in this study to pinpoint potential problem areas not only in Oklahoma, but in other regions of the country, and implement mitigation measures to prevent future induced seismic activity,

“We’ve created a detailed model that allows regulators to know where most of the problems are likely to occur. This can be used in Oklahoma, or elsewhere, to provide a scientific basis for regulatory action.”

The study further illustrates the fact that potential issues regarding current wastewater disposal policies discussed in a separate induced seismicity study released last month have been addressed, and that mitigation efforts to minimize the already small risk of induced seismicity are proving effective. As Langenbruch notes in the study’s press release,

The Stanford research team’s 2016 study even notes that current mitigation measures could reduce Oklahoma’s seismic activity to background levels in five to 10 years.

The fact that Oklahoma’s seismic activity continues to decline even as drilling activity surges in the Sooner State – and is forecasted to continue declining in the future –further dispels some persistent myths regarding induced seismicity and hydraulic fracturing. These issues are addressed with refreshing clarity on the United States Geological Survey’s (USGS) induced earthquakes “myths and misconceptions” page.

USGS clearly states that wastewater disposal – not fracking – is responsible for a vast majority of induced seismic events in the United States and Oklahoma,

“Fact 1: Fracking is NOT causing most of the induced earthquakes. Wastewater disposal is the primary cause of the recent increase in earthquakes in the central United States.”

“In Oklahoma, which has the most induced earthquakes in US, only 1-2% of the earthquakes can be linked to hydraulic fracturing operations. The remaining earthquakes are induced by wastewater disposal.”

Just as importantly, USGS explains that the wastewater disposal process is primarily employed to dispose of co-produced saltwater that is produced by virtually all conventional and non-conventional wells,

“Fact 3: Wastewater is produced at all oil wells, not just hydraulic fracturing sites.”

Specifically, as the Stanford researchers have previously noted, the USGS emphasizes that a vast majority of Oklahoma wastewater disposal is saltwater co-produced along with oil and gas during day-to-day production – not fracking flowback water,

“Fact 4: The content of the wastewater injected in disposal wells is highly variable.”

Although public understanding of the cause of Oklahoma’s induced seismicity issues remains clouded by deliberate “Keep It In the Ground” misinformation efforts and misleading media reports, the issue is fully understood by both regulators and academics such as the Stanford research team responsible for this study. And that shared understanding by both parties is yielding effective science-based mitigation results that are further reducing the already small risk of induced seismicity from wastewater disposal.