Study: Those Who Live Near Oil & Natural Gas Production Most Likely to Support It

Coloradans living near oil and natural gas development are most likely to support this activity, while the industry’s biggest opponents tend to live in areas with little to no production, according to a  new study.

Researchers from environmental think tank Resources for the Future reviewed voter data from Colorado’s Proposition 112 ballot initiative that took place during the 2018 election. The findings are especially notable as the anti-drilling Prop 112, which was rejected by voters, would have greatly increased the setback distance of oil and natural gas production from homes and other occupied structures and essentially placed a ban on a significant percentage of the state’s development.

The researchers arrived at their conclusion by examining both precinct-level election data published by Colorado and oil and natural gas well data. They explained their methods:

“This analysis relies on data from the November 2018 general election, published in the Spring of 2019, and includes vote totals for 3,135 precincts. Overall, most precincts opposed Prop 112.

“…To measure the level of oil and gas activity within a given precinct, we gathered data from DrillingInfo, an industry source with detailed well-level data, including geospatial information. We gathered data on all oil and gas wells with first production occurring on or after January 1, 2000, totaling 53,753 wells.”

Our work is new b/c it uses real-world voting behavior, where a “Yes” vote on Prop112 would have heavily restricted drilling in Colorado. We use precinct-level data and o/g well locations to measure relationship b/n proximity, partisanship, and industry support.

Support for Industry High Among Resident Near Production

A vote for Prop 112 would have greatly extended setback distances. A vote against the measure was seen as support for the industry, while a vote supporting the measure was widely viewed as desiring a ban on oil and natural gas production; The study cited the Colorado Oil & Gas Conservation Commission which said the measure “would have made more than 80 percent of the state’s surface area unavailable for development, excluding federal lands.”

The study found a clear connection between the proximity of people living near oil and gas production and their support for their industry:

“Of the 2,522 jurisdictions we examine (2,515 precincts plus 7 counties), 1,648 voted against Prop 112 while 875 precincts voted in favor. Generally speaking, precincts that opposed Prop 112 were far more likely to have at least some oil and gas activity within their boundaries.

Likewise, the study found that that opposition to oil and natural gas was highest among people who didn’t live near production sites:

The following table from the study shows just how sharp the rise in opposition to Prop 112 was when examining precincts with wells. 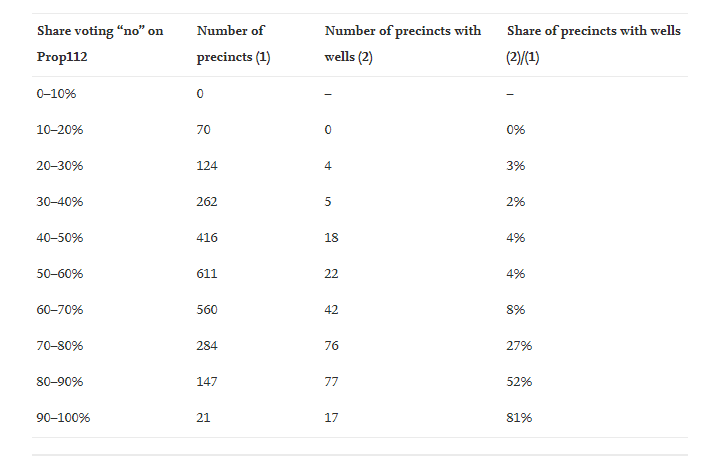 The study even showed that opposition to Prop 112 grew as well density increased:

“For each additional well per square mile within a given precinct, opposition to Prop 112 increases by 0.74 percent.”

Notably, while the researchers identified some partisan explanation for this divide – more Republicans live in rural communities, while metropolitan precincts tend to house more Democrats – they acknowledge the tremendous benefits the state as a whole has received from oil and natural gas development:

“First, some areas have decades of experience with oil and gas development, while residents in other regions are new to the industry. Second, oil and gas development is occurring both in major metropolitan as well as rural regions where socioeconomic, geographic, and political conditions vary substantially. Although some localities in Colorado have sought to restrict or even ban fracking, the state as a whole has enjoyed the economic benefits of increased development.”

Similar Support In Other States

Colorado isn’t the only state where support for the oil and gas industry is associated with those who live near production, and the study cited other states with similar situations:

“Dokshin finds that in New York State, prior to the statewide prohibition, municipalities were more likely to ban fracking if they were located at the periphery of potential development, had little previous experience with the industry, and were more politically liberal. In Illinois, where little shale development has occurred to date, Dokshin and Buday show that the bulk of opposition to fracking came from politically liberal regions where development was unlikely to occur due to geological conditions.” (emphasis added)

A ballot initiative to ban fracking in Denton, Texas passed in 2014, but residents in the two neighborhoods that form the city’s main drilling corridor voted against the proposal by a margin of 2-to-1.

It’s the same in Pennsylvania, another state with a major oil and natural industry. A recent Franklin & Marshall poll found:

“Opposition to a fracking ban was strongest in the counties outside of Pittsburgh — where much of the state’s drilling takes place. While 61 percent of respondents in Allegheny County, which includes Pittsburgh and its suburbs, (support a ban) only 28 percent of people in the rest of southwestern Pennsylvania favored a ban, versus 55 percent who were opposed. Those counties include Washington and Greene — two of the most heavily drilled in the state.” (emphasis added)

Resources for the Future’s research into how Coloradans perceive the oil and natural gas industry is important and is in line with similar findings in other states. Research like this contradicts activists’ narratives alleging that conditions near oil and natural gas sites are causing widespread harm. Those individuals who live closest to these activities also consistently tend to have the highest support for them – a phenomenon that wouldn’t occur if these activists’ claims were true.