The impacts of American energy production aren’t felt only in top producing states like Texas and Pennsylvania—the industry is a driver of employment and growth in every sector of the economy and in all 50 states. In fact, the oil and natural gas industry directly or indirectly supported 11.3 million jobs and had a nationwide economic impact of nearly $1.7 trillion in 2019, according to a new PricewaterhouseCoopers study commissioned by the American Petroleum Institute.

Drawing on state employment data, the study found that the industry supported an additional 3.5 jobs across the economy for each direct industry job, representing 5.6 percent of total U.S. employment.

“Every state across the country – both blue states and red states – rely on American energy to fuel each sector of the economy and support millions of U.S. jobs. This study reinforces that America’s economic outlook is brighter when we are leading the world in energy production, and it serves as a reminder of what’s at stake if policymakers restrict access to affordable, reliable energy and make us more dependent on foreign sources.”

The economic numbers are especially strong in the country’s top energy-producing regions: the Permian Basin, the Appalachian Basin, and across the Mountain West. 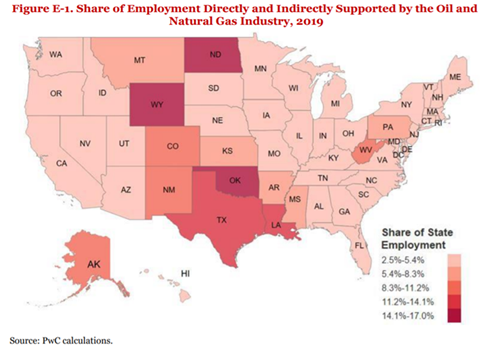 Oil and natural gas leases, taxes, and fees have long been a crucial sources of state revenue for New Mexico, but the industry’s presence also helps to drive job creation and economic development in other sectors. According to the study, the industry directly and indirectly contributed more than $18.8 billion to New Mexico’s gross domestic product, some 17.9 percent of the state’s total and supported more than 46,000 direct jobs.

“[T]his analysis confirms the indispensable role the industry plays in providing jobs and investment that benefits every community and all Texans. As the leaders in domestic energy production, our member companies’ efforts ensure reliable products are available to power modern America and serve as the underlying foundation of Texas public school, university and public infrastructure funding.”

Energy production in the Mountain West supports economic development in the region and is especially important in Colorado, which ranked as one of the states with the highest share of total economic contributions by the oil and natural gas industry. The study found that Colorado’s oil and natural gas industry supported nearly 340,000 total jobs in 2019 and generated $46.1 billion in gross domestic product—all while operating at industry-leading environmental, health, and safety standards.

“Our state has among the most robust regulatory frameworks in the nation, and we are deeply proud to operate in a place that is a global leader in prioritizing public health, safety, welfare, the environment and wildlife. For Coloradans and Americans who will inevitably get the energy they need and use every day, we would submit that it is better for our state, the nation and the world that they get it from right here in Colorado.”

Over the border in Wyoming, the oil and natural gas industry supported 68,600 total jobs in 2019, roughly 17 percent of total employment and provided $6 billion in labor income (25.6 percent of the state’s total.) Petroleum Association of Wyoming President Pete Obermueller said:

“Wyoming’s success is intrinsically linked to the natural gas and oil industry. This report brings to light the fact that the industry’s reach goes far beyond the well pad and into main street business across Wyoming. In order for Wyoming to see a full recovery we must see a return to robust production of our natural gas and oil resources.”

However, these production numbers have been put at risk by the Biden administration’s de facto leasing ban, which threatens future western energy development.

Industry job numbers were similarly high in Pennsylvania, America’s second-highest producer of natural gas, and other parts of the Appalachian Basin. Pennsylvania’s oil and natural gas industry supported nearly 500,000 total jobs in 2019, with each direct job generating an additional 3.7 jobs throughout  the economy.

“Pennsylvania and its abundant supply of shale gas has sustained our state’s economy while generating good jobs and cleaner, affordable energy. However, the state’s short- and long-term economic outlook depends on policies that support natural gas and oil development and critical energy infrastructure.”

And West Virginia’s industry added $11.2 billion to the state’s gross domestic product, including $5.2 billion in total labor income. The 82,000 total jobs either directly in or supported by the industry comprise 9.2 percent of the state’s total employment.

The benefits the energy industry has on the American economy need to be considered as leaders in Washington weigh changes to federal leasing and permitting laws: The shale revolution has U.S. oil and natural gas producers to supply reliable, affordable domestic energy, while employing hundreds of thousands of workers in all 50 states.

To see details about how domestic energy has supported additional states’ economies, see the full report.