Environmental activists in Texas continue to peddle an anti-pipeline agenda with false and misleading information. However, last week, a federal judge in Austin rejected these claims for the third time this year, citing activists’ failure to provide adequate evidence supporting their allegations.

U.S. District Judge Robert Pitman denied a request for a preliminary injunction that would have blocked construction of the Permian Highway Pipeline, a 430-mile natural gas line traversing from West Texas to markets along the Gulf Coast.

During a March 4 hearing, the plaintiffs – including the City of Austin, City of San Marcos, Travis County, Hays County, Barton Springs Edwards Aquifer Conservation District, and several landowners – attempted to demonstrate that the pipeline would degrade local water sources, damage the habitat of protected species near the route and pose other environmental risks.

However, in the March 20 ruling, the judge determined they failed to provide sufficient evidence. The 29-page ruling states:

“Because plaintiffs have not shown harm that is either imminent or reasonably certain, they have failed to show irreparable harm as required for a preliminary injunction.” [emphasis added]

This ruling comes on the heels of similar rulings in which the judge cited inadequate proof supporting the plaintiffs’ claims. Shortly after filing their initial lawsuit in February, the plaintiffs requested an emergency hearing to halt construction of the pipeline but were ultimately rejected in an eight-page decision. Then, plaintiffs petitioned for a temporary restraining order stopping construction until March 1 and were again struck down.

The lawsuit is part of a larger legal effort – spearheaded by the Texas Real Estate Advocacy and Defense (TREAD) Coalition – to challenge the pipeline through a series of lawsuits in both federal and state courts.

Wasting hundreds of thousands of dollars in tax dollars, frivolous, unfounded lawsuits are ultimately bad for consumers, bad for the economy and bad for hard-working Texans. Amid global concerns related to COVID-19, pipelines safely and reliably transport the energy we need to power our homes, towns and businesses during a national state of emergency. We need pipelines to keep America moving forward. 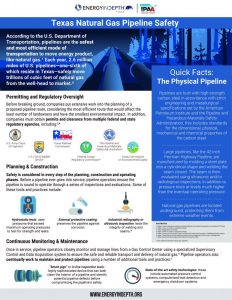