Texas’ oil and natural gas industry paid an unprecedented $16.3 billion in state and local taxes and royalties in 2019, thanks to record high production. This historical contribution marks a 16 percent increase over 2018 and brings the industry’s total contribution to state coffers to a staggering $149 billion since 2007, according to a new report from the Texas Oil & Gas Association.

TXOGA President Todd Staples highlighted how these funds are distributed:

“Oil and natural gas does more than fuel our cars, power our homes and businesses, form the building blocks of our everyday goods and secure our nation. Taxes paid by the oil and natural gas industry support teachers and schools, build roads, boost essential and emergency services, improve healthcare facilities and bolster our state’s infrastructure.” 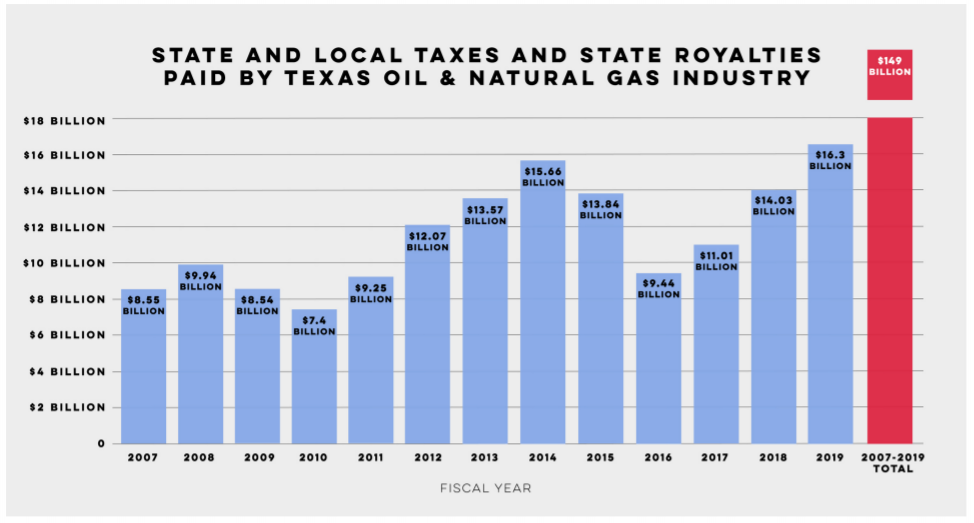 “[O]il and natural gas tax and royalty revenue is the cornerstone of Texas schools, universities and road funding, dedicating billions into these categories every year.”

98 percent of all Texas’ $2.2billion in oil and natural gas royalties go to state funds, with over $2.1 billion being deposited to the State’s Permanent University Fund and Permanent School Fund to support public education across the state.

These funds have allowed UT Austin to establish a $160 million endowment that will increase tuition assistance for low- and middle-income families.

“[This is] money that benefits every Texan – whether you live near the oil patch or not.”

Texas is flowing with oil and natural gas

This windfall to the local and state budgets is thanks to record breaking oil and natural gas production and the completion of new wells. Earlier this year, the Permian Basin surpassed Saudi Arabia’s Ghawar oilfield to become the highest producing oilfield in the world.

As the New York Times explained earlier this year,

Today, Texas’ daily average oil production exceeds 5.27 million bpd, representing over 40 percent of the nation’s average daily production. Production on this scale has allowed the United States to be the world’s leading net exporter of oil. In fact, if Texas were its own country, it would be ranked fourth in oil production, just behind Saudi Arabia. 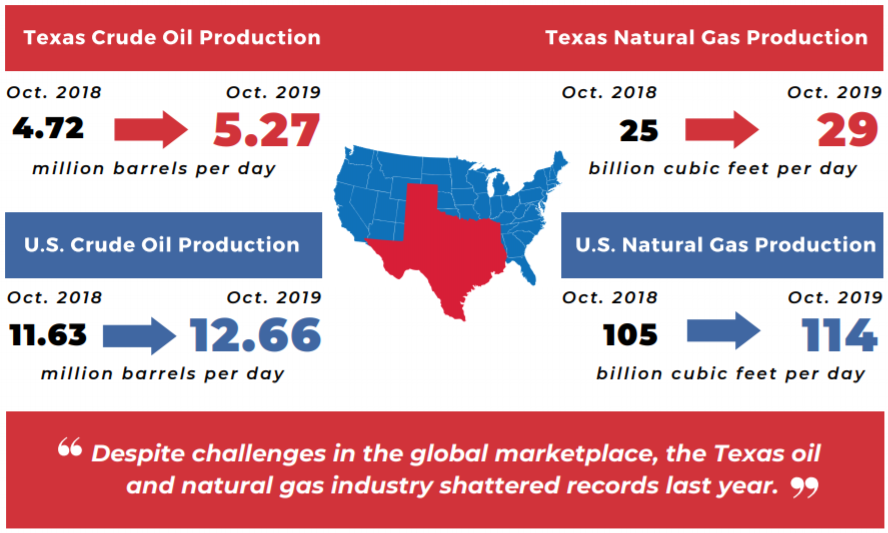 Texas is leading the way in high-paying energy jobs.

2019 proposed some challenged to the Texas energy industry, but it perservered and even thrived. Its success can be contributed to its investment in employees, innovations and policies that have kept it being efficient and safe in its energy development.

“Growth that drives these achievements is not guaranteed. Texas’ commitment to science-based regulations and consistent policies, and the energy sectors’ ongoing investment in technology and innovation will ensure that our state and our nation can continue to lead the world in energy production, economic strength and environmental progress.”