It’s no secret that New Mexico is in a bind. From the Biden administration’s efforts to ban new permits and leases on federal land, to the New Mexico legislature’s move to place a ban on new hydraulic fracturing permits on state lands during this legislative session, there’s an all-out assault against the state’s energy industry.

Oil and natural gas production in the state was responsible for around 33.5 percent of New Mexico’s general fund revenue in FY2020. The general fund supplies critical state programs like education, healthcare, and emergency services. Without oil and gas revenues, these services would undoubtedly become underfunded.

Furthermore, New Mexico gained $3.1 billion in tax revenue from oil and gas production in FY2019. That was a 34.4 percent year-to-date increase from the previous year, meaning that the state’s economy was on a pathway to continuing growth. Even with decreased demand during the pandemic, the oil and gas generated $2.8 billion for the state budget in FY2020.

New Mexico’s Legislative Finance Committee (LFC) projects that if Senate Bill 149 were to pass and new fracking permits were prohibited, the state would lose increased revenue each year beginning with $1.7 billion in FY2022 to $3.8 billion in FY2025, resulting in $11 billion in total lost revenue for the state over a four year period. This would equate to tens of thousands of lost jobs in addition to devastating revenue decreases to state and local government coffers.

“Substantial changes to how this industry operates in New Mexico – such as a temporary moratorium on hydraulic fracturing – would cause severe revenue losses. Without a source of revenues to replace these losses, this bill would have a substantial negative budgetary impact.” 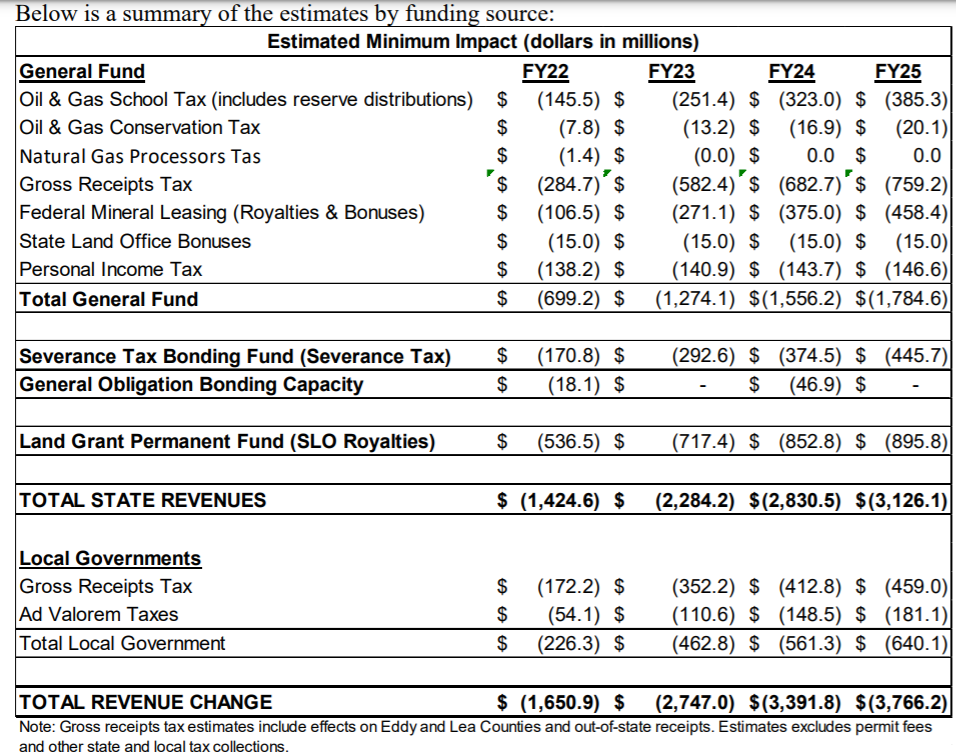 It’s a similar situation on the federal front, where billions of dollars in state revenue is also on the line. Revenue generated from New Mexico’s federal oil and gas development represented 18 percent of the state’s budget ($1.5 billion) in FY2020, according to a recent analysis from the New Mexico Tax Research Institute. That includes:

The upside amid the tumultuous affront on New Mexico’s main revenue stream is the promise of short-term potential. Analysts in the state legislature estimate that government revenue is expected to increase by $339 million during the next fiscal year to total $7.55 billion, which is $200 billion higher than it was in December. As the Associated Press reports:

“Severance taxes and royalties on oil production account for most of the bump in forecasted state income, amid higher market prices for oil and surging local production in the final months of 2020. Muñoz said he has written a letter to the White House asking for an exemption from a recent pause on oil lease and permit approvals on federal land. The Democratic senator believes permitting delays on pipeline infrastructure could make it harder to bring natural gas to market amid surging prices — and even lead to greater releases and burning of excess gas directly into the atmosphere.”

Just one of these policies could have significant impacts on New Mexico’s state budget and the critical services that rely on oil and gas funding. If the federal orders last long-term or permanently and S.B. 149 passes, the state could face truly dire shortfalls with no realistic solution being offered to make them up.