The ‘You Absolutely Love To See It’ Act: Fringe Dems Want to Punish Oil and Gas Workers during Pandemic

Apparently aiming to make the terrible COVID-19 crisis even worse, a group of fringe Congressional Democrats introduced legislation on Tuesday which could leave oil and natural gas workers out of a job and undermine the very industry producing the energy and supplies necessary to get through the pandemic.

The release of the bill comes just days after Rep. Alexandria Ocasio-Cortez (D-N.Y.), key author of the Green New Deal, tweeted out “You absolutely love to see it” in response to falling oil prices last month, taking delight in the fact that thousands of workers we’re losing their jobs in real time and paychecks were disappearing. 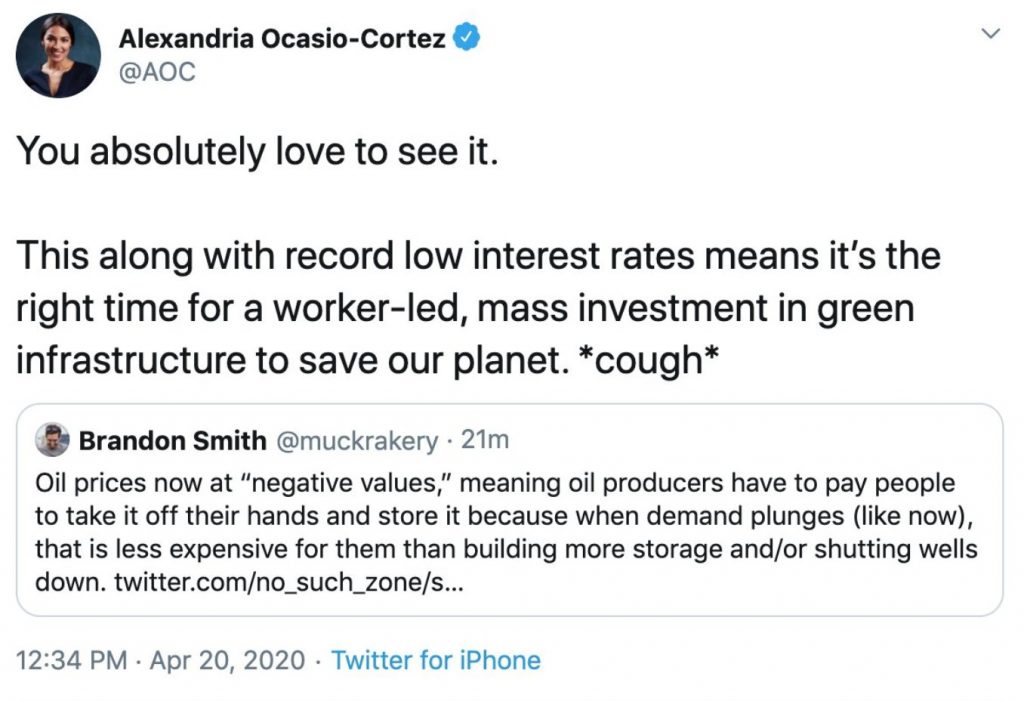 Ocasio-Cortez quickly deleted the tweet. The ReWIND Act, meanwhile, may indicate that the tweet was no typo.

Countless small businesses like contractors, hotels, and restaurants rely on a functioning energy industry, yet all of these would be jeopardized by the ReWIND Act. The bill would also block financial institutions taking part in the CARES Act from financing new fossil fuel projects for two years and bar new leasing on public lands until COVID-19 has ended. Both proposals are surefire ways to ensure we won’t have the energy and materials needed to combat this pandemic.

Notably, oil and natural gas companies are also producing the Personal Protective Equipment that frontline workers are relying on to keep them safe. It’s why energy workers have been declared “essential” by both Democratic and Republican governors around the country.

This bill follows a similar effort from 40 Democrats requesting the Treasury Department and the Federal Reserve deny financial assistance to fossil fuel workers .

The recently introduced bill may raise concerns that the “Just Transition” for oil and gas workers – a common message point among anti-fossil fuel activists – is nothing but an empty promise.