This weekend, Eric Lipton and a team of reporters from the New York Times published a lengthy story about federal leasing for oil and natural gas development in Wyoming, and how a recent uptick in development was “driven by” the Trump administration. The broader thesis is what you might expect: the Trump administration is working “hand in glove with the industry” to expand leasing on federal lands, particularly by rolling back costly rules, including ones finalized in the final weeks of the Obama administration. The Times relied on data from a group called Taxpayers for Common Sense, which has been an outspoken defender of controversial regulations targeting venting and flaring on federal lands.

However, easily obtained federal data completely undermine the Times‘ narrative, and it’s not even close.

The centerpiece of the story is a chart showing an increase in acreage offered during federal lease sales during the Trump administration. Lipton even tweeted out the chart, accusing the White House of being in a “race to lease more and more federal lands for oil and gas drilling.”

Seems pretty cut and dry, right? Wrong. This is a classic case of using deliberately misleading data to support what had to have been a predetermined conclusion.

The clever sleight of hand is Lipton’s use of land offered for lease, rather than acreage actually leased for development. If you’re suggesting there’s some sort of frenzy of new drilling, then focusing on where companies are actually drilling would be the more appropriate data to examine.

Each year of President Obama’s first term, more federal acreage was leased for development than during the current administration. Don’t believe us? Here are the data, directly from the U.S. Bureau of Land Management. 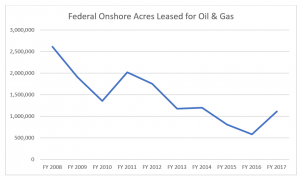 But Lipton focused on Wyoming, and even reported on the ground from the Cowboy State. Perhaps the data for Wyoming support the Times‘ narrative? Nope. 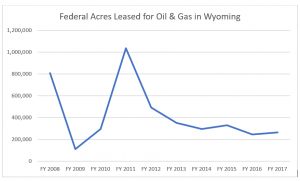 The New York Times claims a surge in leasing on federal lands in Wyoming — which doesn’t exist — was “driven by Trump policy changes” that allegedly put certain birds and other species at risk. The available data simply do not corroborate this claim.