U.S. LNG Exports Are Part of the Solution To Cleaner Air Across the Globe

The shift to natural gas over the past decade has helped make the United States the global leader in emissions reductions, and U.S. LNG exports are key for developing nations seeking to transition from higher-emitting fuels to lower their own emissions and pollution mortality rate.

It’s a clear reminder of the benefits of cleaner-burning natural gas, despite being given short shrift from a Harvard University study attempting to assign a high global mortality rate to all fossil fuels.

In fact, there is a direct relation with growing natural gas consumption and declining air pollutant emissions as observed in the graphs below from the Environmental Protection Agency’s Our Nation’s Air platform and Energy Information Administration’s electricity generation by source. 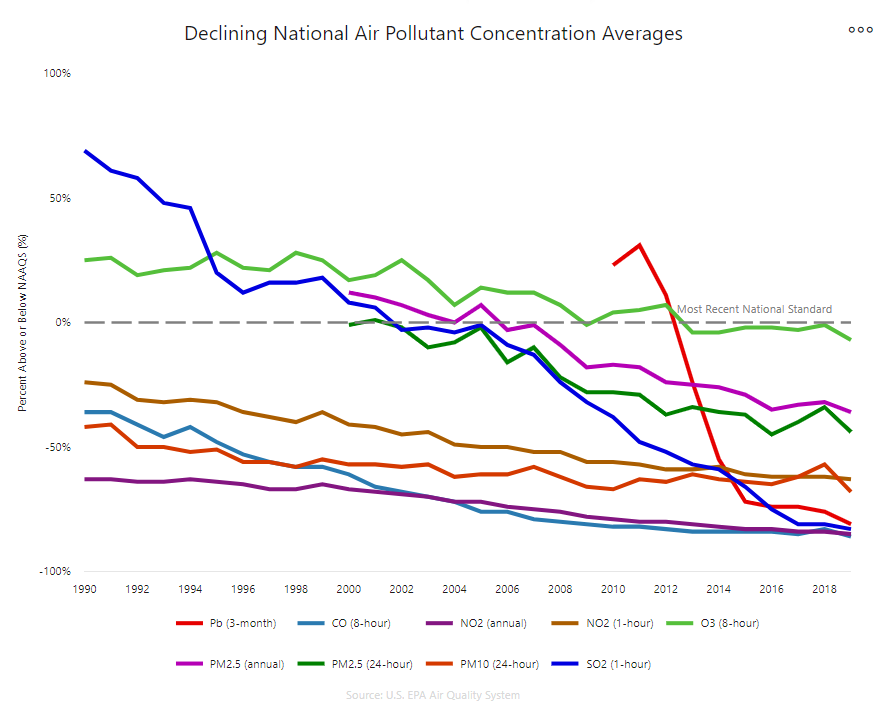 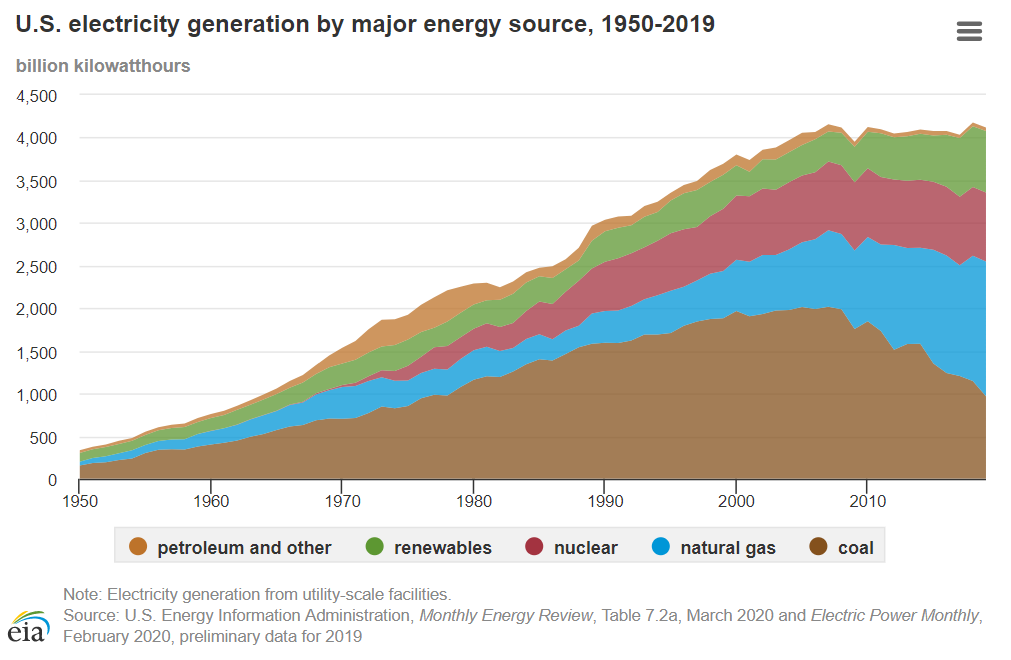 It is not just that greenhouse gas emissions have declined, but that air quality pollutants, including PM2.5 and PM10, have also dropped significantly. In fact, according to the EPA, over the last 50 years, the combined emissions of the six common pollutants (PM2.5, PM10, SO2, NOx, VOCs and CO) fell by 77 percent.

What’s more, the sharp decline in all air pollutants is directly reflected in the country’s air quality. As reported by the EPA, air quality in the United States has improved significantly, with “bad air” days reaching record lows over the last two decades. For context, twenty years ago, cities would, on average, experience two months of unhealthy or bad air days per year. Now, cities have fewer than 13 days of bad air quality per year. 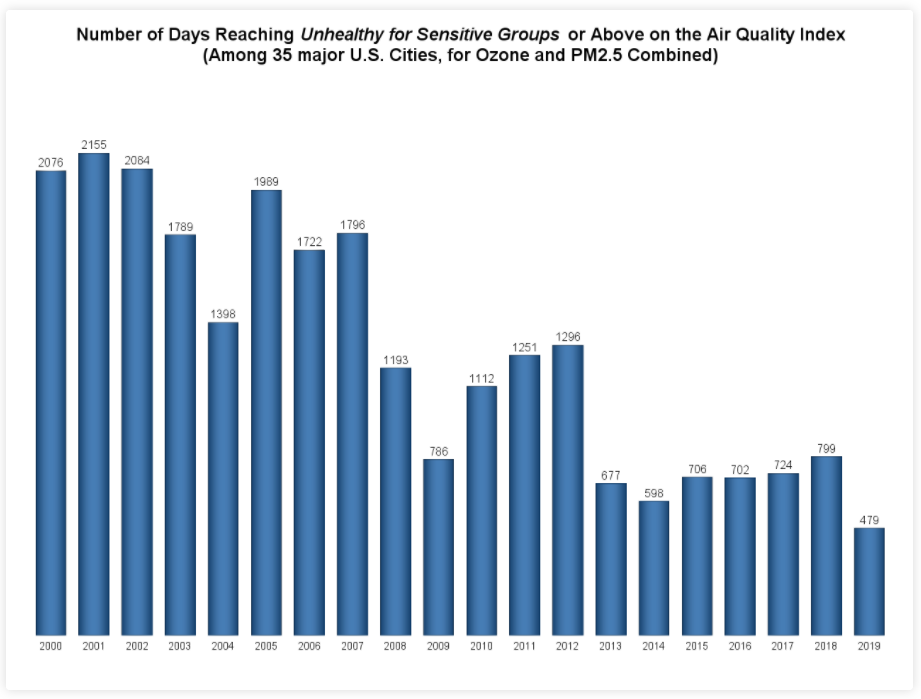 This process concurs with natural gas expansion in the United States. Over the last 15 years, natural gas has quickly become the dominant energy source for electricity generation. According to the EIA, between 2011 and 2019, 103 out of 121 coal-fired power plants were converted to or replaced by natural gas-fired plants.

The study estimates that one in five deaths worldwide are related to airborne particulate matter, also known as smog, potentially related to the burning of fossil fuels. In misleading media coverage of the study, natural gas was placed in the same category as other fuels.

But as Andrew Revkin, a renowned environmental journalist, noted in his coverage of the study, “not all fossil fuels are the same.”

"Deaths from fossil fuel emissions higher than previously thought" https://t.co/yhjGoeyEgJ Powerful new look at the global p.m. 2.5 health crisis. BUT this @hseas release sadly doesn't note that not all fossil fuels are the same. e.g. LPG🔽1/

More importantly, according to the study, over 60 percent of global deaths from air pollutions occurs in China and India, two of the largest energy-consuming economies that are also heavily reliant on coal, fuel oil and biomass for their energy needs.

The correlation between the use of traditional fossil fuels and health-threatening emissions levels is no coincidence. In fact, as reported by the EIA, coal emits almost twice as much carbon dioxide per unit than natural gas. Meaning that natural gas is a reasonable solution for satisfying both countries’ energy demands under a low-carbon path, just as the United States has drastically reduced its carbon-related emissions and air pollution levels by switching its electricity generation to natural gas.

A Chinese and Indian Case for U.S. Natural Gas

Transitioning quickly from coal and other more carbon-intensive fuels to natural gas should be a priority for both China and India if they hope to lower the tragically high rate of 62 percent of global air pollution fatalities estimated in the Harvard studies. Both countries rely heavily on traditional fossil fuels for electricity generation and industrial use, and both face critical air pollution levels.

In the case of China, coal is the dominant fuel. It represented 58 percent of the country’s total energy consumption in 2019, while natural gas accounts for less than 10 percent of total energy use.

However, natural gas consumption is expected to dramatically increase because of Chinese policies geared to diversify their energy mix and reduce GHG emissions. In fact, China is already the largest natural gas importer in the world and second largest LNG importer. LNG accounted for more than 60 percent of the total gas imports in 2019, overtaking pipeline gas imports.

Yet, natural gas is poised to play a greater role in the Indian energy market. As stated in the IEA’s latest India-focused outlook:

“India’s ambition to become a ‘gas-based economy’ fits well with the interest among many exporting countries.”

In fact, the IEA estimates that both China and India can be the driving forces behind global LNG expansion in the future. According to its latest natural gas-focused report, the IEA forecasts that China will account for 22 percent of the total LNG demand by 2025, while India would represent 20 percent of global LNG trade by the same year.

In addition, the IEA also expects the United States to become the major supplier of LNG globally by 2025, surpassing both Qatar and Australia. As noted in the graph above, U.S. LNG exports will triple in the next five years, becoming the de facto LNG source for both energy-starved countries.

Natural gas has proven to be an affordable, reliable, cleaner-burning energy source that is playing a major role in emissions reductions, with improving air quality across the United States – a clear benefit. A shift to natural gas in China, India, and other developing nations, powered by U.S. LNG exports, will help lower air pollution overseas and reduce fatalities.