The U.S. shale revolution has led to strong economic growth, reduced air emissions, and falling prices for American consumers. It’s also helped the United States become one of the largest exporters of liquified natural gas in the world.

The United States has seen LNG exports skyrocket since the first shipment left the lower 48 states in early 2016. As a new report from the Energy Information Administration explains:

“U.S. exports of LNG have been growing steadily and reached a new peak of 4.7 billion cubic feet per day (Bcf/d) in May 2019, according to the latest data published by the U.S. Department of Energy’s Office of Fossil Energy.” 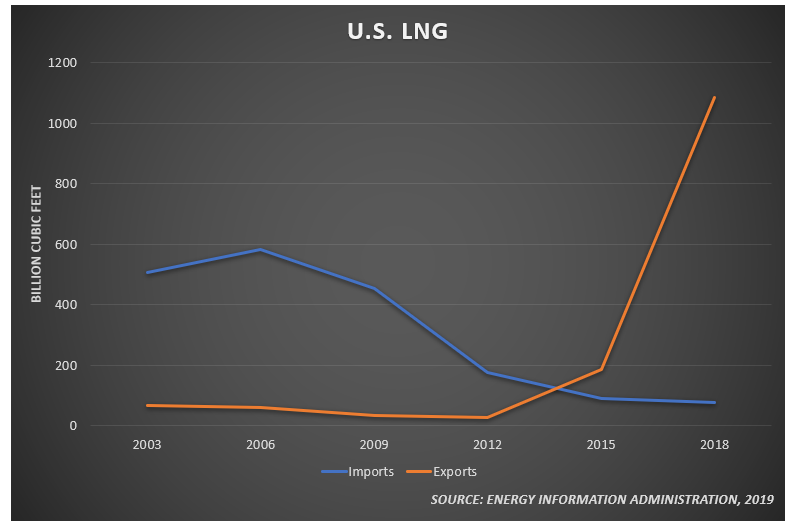 The increase has transformed the United States into a net LNG exporter over the last three years:

Further, the International Energy Agency predicts that by 2024 the United States will ship more than 4 trillion cubic feet of natural gas annually, surpassing Qatar and Australia as the world’s top LNG supplier.

Increased U.S. exports have been driven by demand from Europe where the price differential makes the continent a more profitable destination. From the EIA report:

The push for decarbonization and more renewable sources has meant that Europe is in even greater need of natural gas. Because renewable power isn’t always readily available, natural gas acts as a baseload power source that can be accessed at any time to generate electricity. The increased use of natural gas has proven to be instrumental in lowering U.S. emissions – a trend European policymakers appear to be ready to implement as well:

“LNG imports to Europe have been relatively low in recent years, but they are expected to grow as new LNG supply comes online and European countries continue to increase natural gas consumption as part of their decarbonization initiatives.”

Natural gas will be an important energy source in places like Germany, where, as a recent Reuters report explained, becoming over-reliant on renewables too quickly could result in an energy shortage in the next few years:

“Germany, a poster child for responsible energy, is renouncing nuclear and coal. The problem is, say many power producers and grid operators, it may struggle to keep the lights on. … However, Germany’s four transmission system operators (TSO) estimate there could be a shortfall of 5.5 gigawatts between peak power demand and reliable capacity in 2021, which equates to the supply of electricity to 13-14 million people, and that’s before factoring in the bulk of coal plant closures.”

Reuters also reports how a lack of reliable power could have major consequences for Germany’s manufacturing-intensive economy:

“Regardless of who may be right or wrong, German manufacturers say they are worried about the prospect of black-outs or even short outages. They say they can’t afford to lose secure flows of electricity, nor can they survive higher network handling costs that could accompany more unreliable renewables.

“‘As an energy-intensive industry, we can only go without conventional energy once renewables are in a position to offer reliable supply,’ managing director Volker Backs told Reuters.”

And as Reuters further explains, a lack of surplus energy in Germany, could have impacts beyond the country’s borders:

“However, they say, a big question remains: how will Europe struggle through until this happens, keeping the lights on and its businesses competitive? Countries in similar positions can’t all import from each other. Germany’s rapid and radical shift makes the scenario more precarious. German output accounts for around 20% of the European Union’s electricity, with France another 17%, according to figures from Eurostat, the EU statistics office.

“Germany is a net exporter to Austria, Switzerland and Poland and also the Netherlands, which sends some of the power onwards to Britain and Belgium. Thus, if Germany alone was to stop reliably producing surpluses, several parts of the continent could see power shortfalls – and outages – as a consequence.”

Liberty Oilfield Services’ Chris Wright warned lawmakers about the potential consequences of Germany’s approach during a recent U.S. House Select Committee on the Climate Crisis field hearing in Boulder, Colo.. Moving too fast to renewables without the backup power of natural gas could lead to skyrocketing electricity prices that put consumers in a precarious situation of being unable to maintain adequate temperatures in their homes during peak summer and winter temperatures.  As Wright explained:

“The biggest example here is Germany, who certainly spent per-capita the most of any country in the world. They started earlier. Germany spent somewhere between $200 and $400 billion in German clean energy transition. Number one, they reduced their CO2 emissions over the last decade, significantly less than the United States has. In fact, I mentioned the world gets 81% of its energy from fossil fuels, Germany gets 84% of its energy from fossil fuels.

“The part that concerns me the most, to me it should be focused on humans, is Germany doubled their electricity prices from the start of their energy transition. Today, they’re three times higher than the United States. And from their own public health data, 30,000 people are killed every year. Premature deaths because of the extra cost of energy, they don’t heat their homes. That’s a significant problem in the U.S. More than 10% of Americans report keeping their house at unsafe temperatures – both too hot and too cold – because of electricity prices.”

The United States has become an energy superpower driven by increased natural gas exports, with Europe now the biggest customer. And with a sustained push for renewables, natural gas will continue to play a key role in providing baseload power to keep electricity prices low for businesses and consumers.