The U.S. electric power sector has surpassed the Obama Administration’s Clean Power Plan emissions reduction targets 11 years ahead of schedule, according to a new report by the Carbon Tax Center.

The CPP aimed to cut carbon emissions from electricity generation by 32 percent of 2005 levels by 2030. But in 2019, the power sector exceeded all expectations – without the CPP ever being implemented – by reducing emissions by 33 percent since 2005, thanks in large part to natural gas.

The result? The pace of carbon reductions in these three years exceeded the average reduction rate over the prior eleven years by 25 percent. 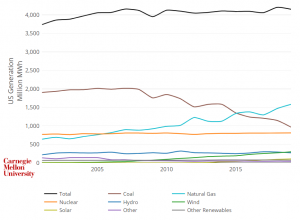