Government and business leaders across the west have been warning that the Biden administration’s illegal ban on federal oil and natural leasing will have both short- and long-term consequences for America’s energy security.

It’s a sharp rebuttal to a new study from the Conservation Economics Institute (paid for by the anti-fracking Natural Resources Defense Council) that looks at the impacts of the federal leasing ban on five Western states—Colorado, Montana, New Mexico, Utah, and Wyoming— and concludes both that the leasing ban has had little impact on domestic energy production and that the policy was a necessary course correction to put the United States on the path to a low carbon future.

But notably left out of this discussion in the study are the harms that western states are already suffering due to delayed lease sales and halted production. Regulatory uncertainty at the federal level has led many companies to postpone exploration and investment, costing states like North Dakota and Wyoming jobs in the short-term and future production revenues in the long-term.

Ironically, the study included the map below showing just how important a robust federal leasing program is for communities across those five western states. 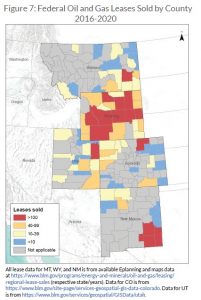 Across the west, energy production is up compared to 2020, boosted by higher oil prices driven from increased economic demand coming out of the COVID-19 pandemic.

But oil and natural gas companies warn that regulatory uncertainty is hampering production and while the federal leasing ban has already negatively impacted energy development in some states, its real impact will be in the future. Leases that go unsold today represent a loss of production tomorrow.

Rikki Hrenko-Browning, president of the Utah Petroleum Association, recently told the Salt Lake Tribune that the impacts of the leasing ban would not be felt for some time:

“There is a long lead time from leasing to permitting to actual drilling, and it will take time for the full impacts of the federal leasing policy to be felt. However, right now, our state is missing out on key revenues from lease sales that should have happened this year and jobs are at risk if the illegal leasing ban continues.”

Meanwhile, North Dakota is suing the Interior Department over the cancelled March and June 2021 lease sales, claiming that it has  already cost more than $82 million in lost federal and state royalties, and personal and sales taxes.

“We have long touted the positive economic impacts provided by our industry that benefit the entire state – not only through tax revenues, but also jobs and secondary economic activity. Efforts to ban federal leasing will not only harm the economy and subsequently the people of North Dakota, it would also restrict private land and mineral owners from exercising their right to develop their property, and we will do everything we can to fight such actions.”

These concerns are dismissed by the CEI study, which claims that “the short-term effect” of a federal leasing ban would be only lost revenue. But the long-term effects it points to are more concerning. For “Keep It In The Ground” groups, a temporary leasing ban can be a first step toward more permanent restrictions on oil and natural gas development on federal lands with the aim of a “larger preservation effort.”

Midway through the CEI study, and after reviewing data, the authors finally reveal their true goal: blocking oil and natural gas production.

The authors acknowledge a federal leasing moratorium of as little as one year would prevent 1.4 million acres of federal lands from being leased and developed “likely even after leasing resumes.” Going further, the authors write that the moratorium will create market conditions that “make it likely” that areas will not be leased even after the pause is listed.

In fact, the authors admit that one benefit of a federal leasing ban was “a window for reforming federal oil and gas policies and catalyzing a national course correction on energy production.”

Framing the policy as a “much larger preservation effort” than previous programs, the report suggests that it could be a test run for more aggressive policies in the future:

“A federal leasing pause provides a “test run,” for companies to prepare for the significant course correction necessary to transition our economy to cleaner and renewable sources of energy.”

By dismissing the important role oil and natural gas development on federal lands plays in providing tax revenues and jobs to western states, anti-energy groups are pushing their own agenda—one that would severely restrict domestic energy production. But these changes would come at a sharp cost to western states, with real impacts to state and family budgets.