Why Are They Celebrating the Keystone XL Cancellation?

Activists across the country are claiming victory over TC Energy cancelling the Keystone XL pipeline this week following years of uncertainty from the U.S. government, culminating in President Biden revoking its permit just hours after being inaugurated.

But what are they really celebrating?

Keystone XL, which was first proposed in 2008, would have been a net-zero emissions pipeline that transported oil from Canada – a country with some of the highest environmental standards among all major oil producers – to refineries on the Gulf Coast that process heavy crude into gasoline and other necessary products.

We all know it, but it’s worth stating again: Pipelines are by far the safest, most efficient means of transporting oil. Yet U.S.-Canadian pipelines continue to face attacks from activists that either don’t fully comprehend supply and demand or don’t care that this oil will now need to be delivered via truck, rail or – even worse – tankers from countries across the ocean.

In fact, contrary to the “Keep It In the Ground” narrative, stopping Keystone XL doesn’t actually stop the flow of Canadian oil into the United States. But it does limit the means and efficiency of getting the supply into the country.

The United States imports 49 percent more Canadian oil now than it did in 2012 when TC Energy resubmitted its application for Keystone XL. While much of this supply does enter the country via existing pipeline infrastructure, Canadian imports by rail have also increased over this time period. Even with the sharp dropoff in 2020 due to the COVID-19 pandemic, crude by rail imports over the past 10 years have skyrocketed.

Preventing pipelines from being built doesn’t mean the demand just goes away. In fact, as the American Petroleum Institute explains, U.S. refineries are built for the kind of heavy crude that countries like Canada produce:

“While transportation runs primarily on motor fuels, our society also depends on thousands of products that begin as crude oil. Heavier crude oils contain more complex molecules, so they are better for producing many of these niche products.”

“Since the U.S. energy renaissance has accelerated, however, most of the 4.8 mb/d of new U.S. oil production the past six years has been light oil. With U.S. refining capacity geared toward a diverse crude oil slate, a key implication for U.S. petroleum trade is that it would be uneconomic to run refineries solely on domestic light crude oil. Consequently, the United States:

“Therefore, differences among crude oils are important reasons why the U.S. continues to import oil in an era of domestic abundance and export light oil that can be problematic, operationally and financially, to handle with existing U.S. refinery capacity (but also is of great value to refineries globally).”

As infrastructure projects like Keystone XL, Line 3 and Line 5 continue to be targets for activism, refineries are forced to look outside North America to ensure a reliable supply of crude to provide valuable feedstock for U.S. manufacturers.

The result? For starters, the United States recently accepted its second tanker of oil from Iran in the past six months. Oil imports from Russia are also currently at a 10-year high, as Bloomberg recently reported:

“If Saudi Arabia increases its production in the next few months, as many expect, its barrels could potentially displace the Russian ones. So could oil from Kuwait and Iraq. Otherwise, American refiners would still need to find some dense crude to feed their cokers. Crude from Canada’s oil sands is an option; but U.S. refiners are probably already buying as much as is available.”

Got that? Instead of sending dollars to Canada, arguably America’s strongest ally and one of our most important trading partners, we’re now sending more dollars to Russia and OPEC.

When the permit for Keystone XL was cancelled in January, the job losses were immediate. More than 10,000 people found themselves without anticipated income, including roughly 8,000 labor union members. Neal Crabtree, a member of Pipeliners Local Union 798, told members of the U.S. House Natural Resources Committee earlier this year:

“Right now, over 88 percent of my Local Union members are out of work and have been for sometime now.

…The administration seems to think these were just “temporary jobs” and the effect is not that bad. I’m not sure if they understand that a lot of careers in this country rely on temporary projects. A carpenter doesn’t spend his whole career on the same house, a lawyer doesn’t spend his whole career with the same client. The Keystone XL was our house to build this year, it was our client. The effects of cancelling this project will be far reaching, not only for the workers but I also believe it will have negative effect on future projects that provide the reliable energy this country needs.” (emphasis added)

But it wasn’t just construction workers that felt the impacts. Companies found themselves suddenly eating the significant time and money spent on the project over the past decade plus. As Ingo Riemer, President and CEO of Berg Pipe explained during the same forum:

“In January 2020, Berg employed 666 people fulltime in our Mobile, Alabama and Panama City, Florida pipe mills. Today, in April 2021, Berg only employs 147 people. This 78 percent decrease of Berg’s skilled workforce is a direct result of the current national energy policy… It is devastating for a business to invest billions into pipeline infrastructure only to have their permit revoked after the cash has been spent and countless hours of work performed.” (emphasis added)

“The Biden Administration’s action to revoke the existing Presidential Permit for the Keystone XL pipeline has a substantial impact on Fallon County, Montana. The action has directly led to the termination of approximately 70 workers including specialized welders and the loss of $7 million per year in tax revenue. The effort by the administration to cancel the Keystone XL project eliminated these jobs and the stability our workers and their families need during COVID-induced economic uncertainty. Continuing Keystone XL construction would also induce significant spending and revenue at the local level, with millions of dollars going to small businesses. A loss of $7 million per year in tax revenue limits our rural community’s ability to invest in new schools, new roads, and other public works projects that will bring about a higher standard of living.” (emphasis added)

And as Salena Zito reported in the New York Post in January:

“On the morning of Jan. 20, every room of the two-story Stroppel Hotel in Midland, SD, was filled with men and women who work on the Keystone XL pipeline. Most of these union laborers, welders and pipefitters started their day over a cup of coffee in the hotel’s common room before heading out to their jobs.

“By 4 p.m., the entire place was cleared out, leaving the historic hotel silent for the first time since owners Laurie and Wally Cox took it over six months ago…Since Jan. 20, ‘the entire town became an instant ghost down.’” (emphasis added)

Yet despite these very real consequences, the leaders of this movement celebrated by immediately calling for stopping the next pipeline in their crosshairs. 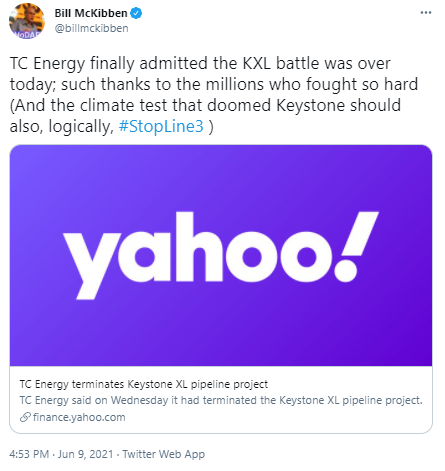 We should all keep this in mind the next time these folks try to convince us they want a “just transition.” If that were truly their aim, they wouldn’t be popping the champagne while working families lose sleep over how they will put food on the table.