Leaders in Wyoming’s oil and natural gas industry warned of the threat posed to the state’s economy and budget by the Biden administration’s moratorium on leasing on federal lands during a regulatory hearing on Tuesday.

Wyoming is the second-biggest producing state for oil and natural gas on onshore federal lands, which churned out $833 million in state and local tax revenue in 2019. The state’s oil and gas industry directly supports 19,000 workers who generated $1.12 billion in economic activity.

Now, those industry leaders have told the Wyoming Oil & Gas Conservation Commission that they are already seeing negative impacts from the federal lands moratorium and that those effects could become devastating if the ban becomes permanent. According to an analysis commissioned by the state government, a permitting ban would cost the state $437 million in tax revenue by 2030 as drilling would decrease by 28 percent and there would be 25,000 fewer jobs that are supported directly or indirectly by the industry.

Wyoming Governor Mark Gordon, who serves as Chairman of the WOGCC, told the operators expressing concern about the federal lands orders, that he “hopes to have the opportunity to bring these directly to the new Secretary of the Interior [Department],” Deb Haaland.

During the WOGCC hearing, Pete Obermueller, President of the Petroleum Association of Wyoming used the below map to highlight the oil and natural gas resources on federal lands in the state: 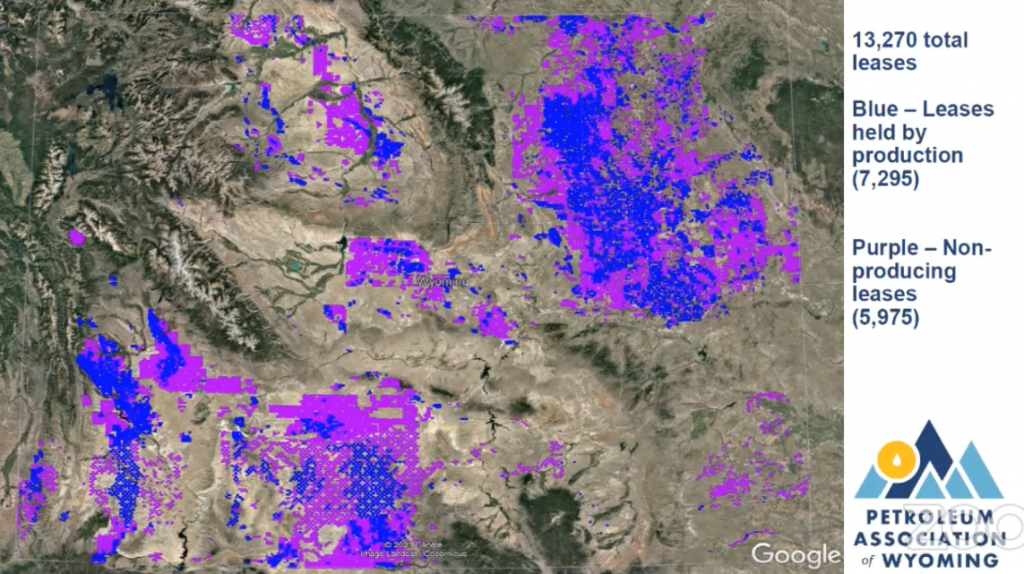 Obermueller also used the map to respond to critics of production on federal lands who say that leases are not being utilized. As Obermueller noted, non-producing leases hold future promise for energy production and revenue generation:

“There is a lot of purple up there and that’s good. That represents to me investment in Wyoming, investment in accessing Wyoming’s high-quality resources. There has been a lot of talk about that being some sort of stockpiling or hoarding or something of that nature. I want to push back on that, because when I see that purple, what I see is private investment in Wyoming. What I see is the future of our ability to fund schools and emergency services and all of those.”

Obermueller also explained that in the past three months, the Interior Department has consolidated decision-making power over leasing policy in Washington, D.C., which has diminished the role of state Bureau of Land Management offices and slowed down permitting approvals.

That concern was echoed by Jasmine Allison, a Senior Environmental Regulatory Analyst at Ultra Resources, who testified about the negative effects that uncertainty has had on the company:

“We’re not seeing any issues on the Wyoming front. It’s all on the federal BLM, and we operate on 98 percent BLM property, so our APDs [application for permit to drill] and right-of-ways are all subject to what is happening currently with the BLM. [Obermueller] is exactly right that the field office is very efficient at what they do. We’ve not really seen delays from their work efforts. It is all about their ability to approve anything and they’ve just had that taken away from them, so they’re not able to approve the items that we’re accustomed to seeing on a regular basis and it does hinder our business and what we look at for rig availability or what we could do in the future.

“It also affects our APD inventory with those APD extensions because you just can’t plan. You have to have enough inventory to consider even having a drilling rig and if you can’t get APD extensions out, then what are you going to do?”

“The problem with these proposed regulations and the federal guidelines have for us – obviously small mom and pops aren’t doing a lot of drilling – but the uncertainty that these regulations pose on the industry are crippling the small operators.

Rob Balsam, Vice President of Sentinel Energy Group, said the federal lands order “appear to be arbitrary and capricious decisions and they are going to have significant, adverse impacts on the state of Wyoming and its residents.”

A comment period on the leasing order ends this week, but Interior has yet to give a deadline for when oil and gas leasing will resume on federal lands and waters.