While Pennsylvanians continue to prosper thanks to growing natural gas production, their neighbors to the north in New York are meeting a much different fate, despite shared access to the Marcellus Shale.

In the midst of the Great Recession, Pennsylvania experienced job and wage growth including a 259 percent increase in oil and natural gas jobs and a 12 percent increase in average annual pay, according to a recent report by the advocacy group Power the Future. The Commonwealth has continued to flourish from a natural gas fee, which has raised $1.7 billion for communities and public programs since 2012.

Meanwhile, New York’s fracking ban has cost 400 jobs per year in many counties and caused a “statistically significant increase in unemployment,” according to the report. Political decisions to further block infrastructure development and limit access to affordable natural gas supplies have inflicted plain on New York consumers that their neighbors to the south have been able to avoid.

The Appalachian Basin is the second largest potential resource of shale gas in the world, according to the Institute for Energy Research. Pennsylvania has taken full advantage of this energy cornucopia, breaking production records year after year.

As the Power the Future report explains,

“[D]espite attempts by the Democratic governor to undermine it, [Pennsylvania] has embraced the shale revolution and the high-paying jobs, affordable energy, and new manufacturing that it brings.” 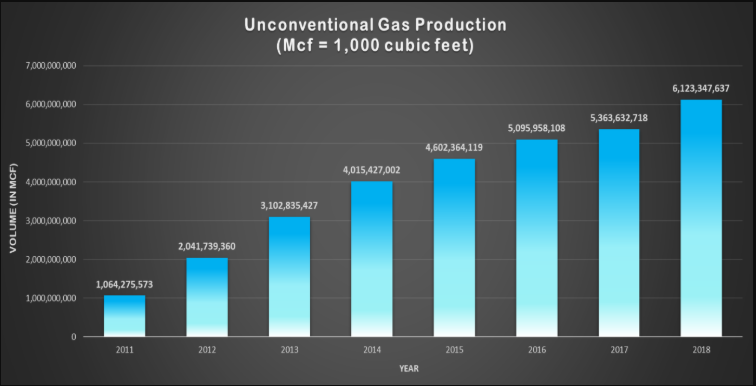 This growing production has had direct benefits for Pennsylvanians. According to the report, Pennsylvania led employment growth across the shale industry, growing 121 percent from 2007-2016. These jobs also provide the highest wages in the industry, with higher wages than West Virginia and Ohio combined.

While the prolific Marcellus Shale also underlies New York, its residents and communities  continue to suffer from misinformed policies that restrict consumers from enjoying the benefits of natural gas.

The Empire State implemented a moratorium in 2008 and outright ban in 2014 on fracking, despite holding an estimated 75 to 100 trillion cubic feet of recoverable gas in its share of the Marcellus. This ban wiped out 191,841 job opportunities – a workforce larger than the entire city of Syracuse – and stunted GDP growth, according to a report by the Global Energy Institute.

More recently, Gov. Andrew Cuomo and “Keep It In the Ground” activists have channeled their energy into blocking pipeline development, despite New York requiring large supplies as the 6th largest consumer of natural gas.

The report details some of the consequences of these politically motivated actions:

“As a result of the war on pipelines, some utilities have been forced to issue moratoria on new gas connections to ‘new residential, and commercial and industrial customer gas service connections.’ This has limited housing and business expansion in those affected areas.”

In 2019, two of New York’s biggest utilities placed moratoriums on new natural gas hook-ups to ensure they can maintain a reliable supply for existing customers. In addition, these actions continue to hike prices for consumers; In 2018, New York residents paid nearly 50 percent more on average for their electricity.

The report paints a vivid picture of how two neighboring states have found different fortunes in their contrasting approaches to shale gas development. Further, it issues a dire warning of the consequences of continuing to follow Cuomo’s chosen path:

“New York’s economic future is in peril… all the while imposing on its citizens a grave economic injustice, which they will only too painfully bear as they watch their compatriots on the other side of the border living a very different, and much better, life.”