As Energy Prices Soar In Europe, U.S. LNG Keeps the Lights and Heat On

Winter in the global north did not spare the United States, United Kingdom or the European Union from record snowfalls and extended cold fronts. And while the United States has been fortunate to rely on its abundant natural gas resources to mitigation reliability and price concerns, our friends across the pond have not been so fortunate.

Supply concerns dominate the energy conversation in Europe as stockpiles run low and the rush towards intermittent renewable resources have failed to provide the firm energy needs of citizens as demand hits a seasonal peak. As European nations assess their energy resources and plan for an energy transition, U.S. LNG has increasingly become a crucial piece of their strategy and with instability in Eastern Europe this reliance could increase yet further.

The bottom line: U.S. LNG is keeping the lights and heat on across Europe.

The start of 2022 has brought into sharp focus European debates around energy security and global energy supply chains. As of yesterday, the United Kingdom’s average energy bill increased 54 percent from April 2021. The jump in utility costs tacks on another expense at a time of rising household bills and spiraling inflation.

The rising cost of energy has turbocharged the debate on managing the energy transition to keep energy reliability and affordability at its core while still moving towards net-zero emissions. The UK’s Net Zero Strategy commits the country to reach net zero emissions by 2050. Within this strategy is an ambitious goal to hugely expand renewable power generation, largely through an increase in offshore wind as well as to invest in low-carbon technologies, nuclear and use natural gas as a bridging fuel to a zero-carbon future.

Low carbon natural gas resources have already helped the United Kingdom reduce emissions in the power sector 72 percent between 1990 and 2019 and provided firm capacity to support the inclusion of more renewables. Natural gas accounts for 41 percent of electricity generation and heats almost 80 percent of homes across the isle. This role will shrink on the path to net-zero, but an absolute reduction will make the source of the remaining gas entering the system increasingly important. Added to this the United Kingdom has set out an ambition to phase out coal power by 2024 and with the intermittency in renewables still an issue, it is almost certain natural gas and LNG usage in the UK will increase further.

Energy Imports in the UK and EU

LNG from the United States is an appealing resource to our partners across the pond thanks to its reduced carbon intensity compared to Russian natural gas, and the fact it comes from a reliable partner with an abundant supply. As Russia limits supply to Europe during the current energy crisis, EU and UK leaders are becoming increasingly aware of their reliance on imported Russian gas. 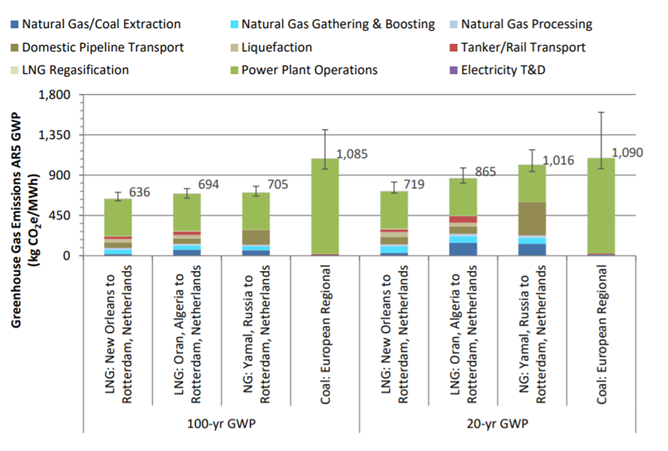 The narrative of relying on natural gas from Russia is less in the public conscience in the UK than in Europe, but this will rapidly change as bills increase further. LNG imported from the United States is keeping the lid on the highest energy prices that the UK has seen in years, and is providing fuel to keep factories running across Europe amid the on-going energy crisis.

In fact, the UK tied with China for receiving the most U.S. LNG cargoes, with each receiving 11 in December.  And across the channel, the EU has been the top customer for U.S. LNG for the last two months, receiving roughly two-thirds of U.S. exports.

Europe would be in a far worse position if it weren’t for a milder winter in Asia leaving ample supply to sustain European economies and warm homes.

The Benefit of Secured Resources

The European Commission has begun to consult with EU countries about classifying natural gas and nuclear energy as “transitional” green energy sources, offering a pathway to continued natural gas resources if facilities switched to low-carbon supplies. The decision capitalizes on previous decisions to import increasingly more LNG from the United States to “diversity and render its energy supply more secure.”

However, as Europe continues to more thoroughly outline its standards for clean energy, it must address the short-term needs of the current energy crisis and the long-term objectives of ambitious net zero goals. Their plans cannot be dependent on Russia’s weaponized energy policy to keep stockpiles full and prices low. And failure to plan for peak demands would lead to more cold and costly winters as European nations fire up coal power plants to meet the demand in a constrained marketplace.

The United Kingdom and the EU has historically benefitted from the transatlantic energy trade in the short term and this winter is no different, but continued investment and expansion of LNG trade will allow Europe to retain flexibility in their energy resources, increasing the share of renewables in their energy mix without reneging on climate goals during seasonal peaks along a longer timeline.

It has become abundantly clear that in recent months that for the United Kingdom and the Europe Union to meet their growing need for energy as well as sticking to their commitments on climate change, there is a need to diversify energy sources. Europe must secure U.S. LNG contracts to ensure that its future energy policy is not determined by Russia while also investing in more ports and LNG pipelines. Europe and the United States have a strong history on being partners in times of global strife and the current flux in international energy markets is no different.