Despite a drop in global energy demand due to COVID-19, natural gas emerged from the pandemic in a position of strength, according to BP’s recently released 2021 Statistical Review.

As the report explains, global primary energy demand fell by 4.5 percent in 2020 – the largest decline since World War II. Yet, natural gas performed better than expected despite the lockdowns, social distancing, and stay at home orders that undermined economic activity.

In fact, the fall in natural gas demand was comparable to that of the 2009 financial crisis, according to BP’s Chief Economist and lead author of the Statistical Review, Spencer Dale:

“Natural gas showed far greater resilience. Gas demand is estimated to have fallen by 2.3 percent ‎‎(81 Bcm) in 2020, a broadly similar decline to that seen in 2009 in the aftermath of the financial crisis.”

Some key insights around natural gas performance include:

Per the BP report, natural gas demand in China grew by 7 percent and LNG imports increased 10.6 percent in  2020.As the following chart shows, Australia and Qatar are currently the leading sources of China’s LNG imports. 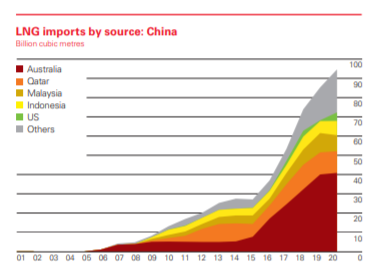 However, as EID has previously explained, U.S. LNG imports have grown recently and are poised to become a key source for China’s natural gas demand in the upcoming years.

In fact, last month, China National Petroleum Corp (CNPC), the country’s second largest crude oil producer, announced it would increase its natural gas use from 8.7 percent to 12 percent by 2030 to reach its climate goals opening up ample opportunity for U.S. LNG to gain market share.

Another unexpected result of the COVID-19 pandemic was natural gas’ growth within the U.S. energy mix. Per the report, natural gas gained market share as a result of the sharp fall in prices, which made the resource more competitive and facilitated the continued switch to the fuel for electricity generation. As Dale explained:

“The relative immunity of natural gas was held by shortfalls in gas prices, which allowed gas generation to gain share in the US power market.”

While the coal-to-gas transition has played out for several years now, the COVID-19 induced shock to energy demand appears to have accelerated this process. The U.S. Energy Information Administration recently reported that coal-fired electricity generation fell 20 percent in 2020, explaining:

“U.S. coal-fired electricity generated totaled 774 million megawatthours (MWh) in 2020, which is less than both natural gas-fired (1.6 billion MWh) and nuclear-powered generation (790 million MWh), according to the U.S. Energy Information Administration’s (EIA) Electric Power Monthly. Last year marked the first time that coal was not the largest or second-largest source of annual electricity generation in the United States since at least 1949.”

This will not only help further reduce CO2 emissions, but also help ensure that consumers continue enjoying affordable and lower-carbon electricity.

Despite falling below the 10-year average growth rate because of the drop in demand from COVID-19, U.S. LNG supply expanded by 29 percent, compensating for drastic declines in other regions including Europe and Africa. 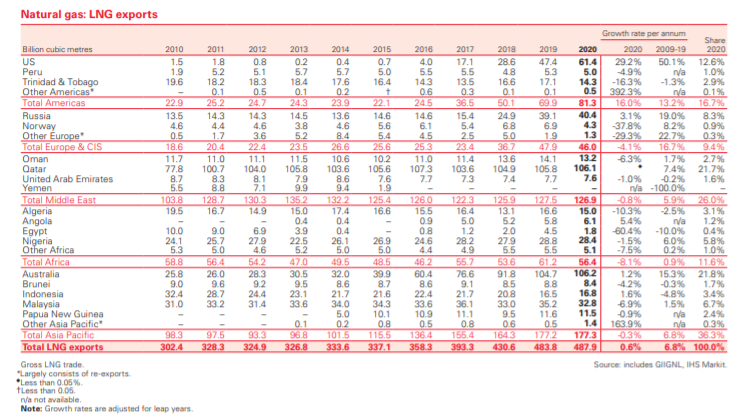 U.S. LNG’s meteoric rise has positioned the country as the third largest LNG exporter in just six years. As noted by EID, the United States has six LNG export facilities online, and multiple new projects are expected to start operations, or be approved, shortly.

The BP Statistical Review serves as an x-ray of the current state of the energy industry worldwide and also brings some needed perspective. As anti-energy activists work to discredit natural gas’ role in the energy transition, the report shows how this cornerstone fuel is providing affordable energy for everyone, but also, that despite the most adverse economic and demand conditions, it remains strong.