Fringe anti-fracking activists, feeling a bit desperate after their failed attempt to ban fracking in the Wayne National Forest, are now calling on “national and international voices” to try to stop oil and gas development.

Recently, two Ohio activists tried to make a big deal about the fact that they’ve been recruiting activists from California to lobby their cause in Washington, D.C. against development in the Wayne National Forest. Those California folks come from a group called SprouTogether and one of its activists, Nathaniel McCarthy, created a petition on Change.org to “Stop the Auctioning of Wayne National Forest for Oil” and recently delivered it to the BLM.

Activists boasted that they had collected over 90,000 signatures, but how many were actually from Ohio? Well, their media stunt put their desperation in the spotlight as the activists openly admitted they had no choice but to recruit help “from all over the world.” As Roxanne Groff, leader of the Athens County Fracking Action Network stated,

“When over 90,000 people weigh in from all over the world (and) not just Ohio, that’s an outcry from all over to say climate change is an issue that must be dealt with.”

The level of support, especially from Ohioans, is pretty obvious in the following picture taken at the “rally.” 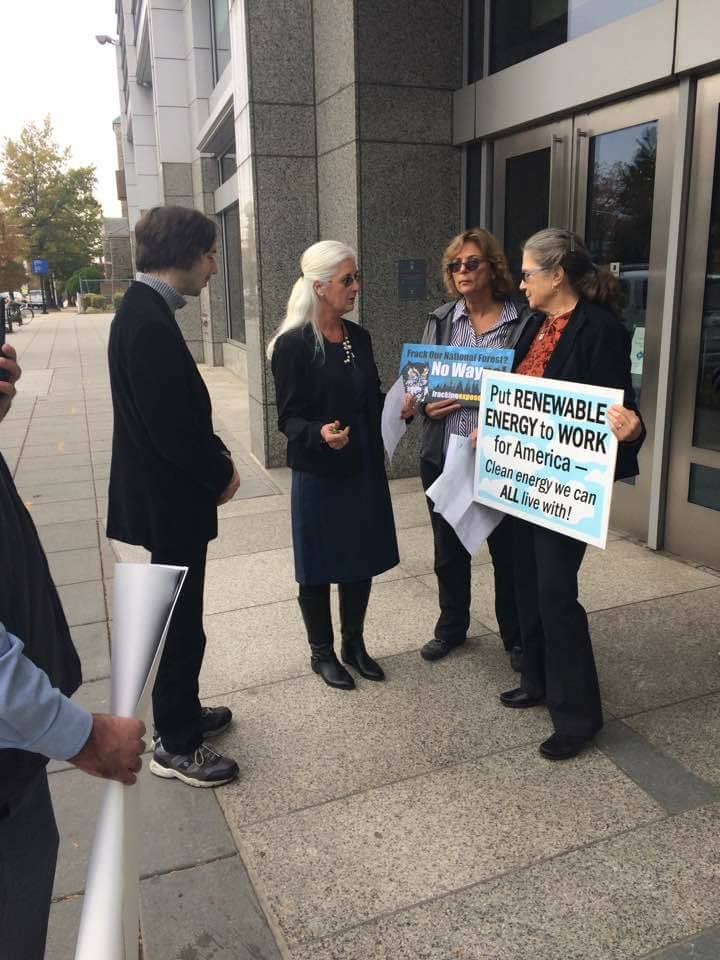 Photo: from SprouTogether Facebook page shows the “huge” the interest really was “from all over the world”.

After suffering enormous defeats on Election Day, it’s not at all surprising that anti-fracking activists are literally throwing spaghetti on the wall to see if anything sticks. So in an effort to try to revive their failed campaign, they’ve taken to the Dakota Access Pipeline playbook for help. According to their Change.org petition,

“It started with the Dakota Access Pipeline (DAPL). We have proven that through peaceful protest, we can fight back against fracking, which can destroy wildlife, poison water sources, and even push forward climate change. Even so, companies silently continue to push fracking in other areas, Even a national forest. Wayne National Forest is located in Southeastern Ohio. Among rare plants and abundant wildlife, a large portion of the Wayne runs along the Ohio River, which supplies drinking water to over 5 million people. This forest is still in danger of fracking, however. The United States Bureau of Land Management is holding an auction to lease off 1,600 acres of the forest with special interest to oil companies. These companies will drill wells, extract oil, and leave once the lease is up. But that is still enough time to leak into the Ohio River, poisoning millions of people, just like the DAPL risked.”

According to the Stop Fracking Ohio Facebook page, the defeated anti-fracking fringe environmentalists are now calling on

“Any of the Ohio or American Native-American tribes, #nodapl Church, or are interested press or other individual or group,  please gather at the front entrance of Wayne National Forest at 9:00 am on Saturday, December 10 with petitions and literature in hand as well as thermos containers of much needed coffee and refreshments. Let’s start ALL working together for the Wayne!”

Of course, their proclamations are short on the facts. BLM and the U.S. Forest Service have been reviewing the merits to lease federal minerals located under the Wayne National Forest for over six years, long before interest in the Dakota Access Pipeline began. There has been extensive public scoping and input after which the federal agency determined leasing would move forward, with the first sale of minerals slated to be auction via a an online sale December 13th.

BLM consulted with the Ohio State Historic Preservation Office (SHPO) and tribes. According to the BLM’s Environmental Assessment the SHPO “found no adverse effect within the scope of the Proposed Action” (to lease federal minerals). Further, the BLM specifically states (page 19) of the EA,

“On November 6, 2015, the BLM sent certified letters to seven federally recognized tribes who have a known connection to the area notifying them of the Proposed Action and asking to identify any concerns with respect to the Proposed Action. To date, the BLM has received no responses to these letters.” (Emphasis Added)

The bottom line is that the Change.org petitions “from all over the world” are not actual protests and for the most part, they’re not coming from actual Ohioans. The BLM is very clear as to what exactly constitutes a “protest” at this point in the process and a bunch of internet generated petitions are not official protests as is clearly defined by the BLM.

Of course, it’s a lot easier to stage media stunts than it is to read the fine print and engage formally, as bipartisan elected officials, landowners, and groups from all over the state have done in support of leasing mineral in the Wayne.