The United States is a living example that it’s possible to both protect the environment and grow the economy. That was a major theme at the  Global Energy Institute’s recent Energy Innovates Summit, where policymakers, energy industry leaders, and regulators came together to discuss the future of U.S. energy.

Growing the Economy While Reducing Emissions

“Thanks to innovation, we’re leading the world in reducing energy emissions…we’ll continue to do so without surrendering one iota of opportunity. Don’t let anyone tell you you can’t grow the economy and protect the environment.”

This economic growth has not been at the expense of the environment: U.S. greenhouse gas emissions have declined alongside increased GDP. 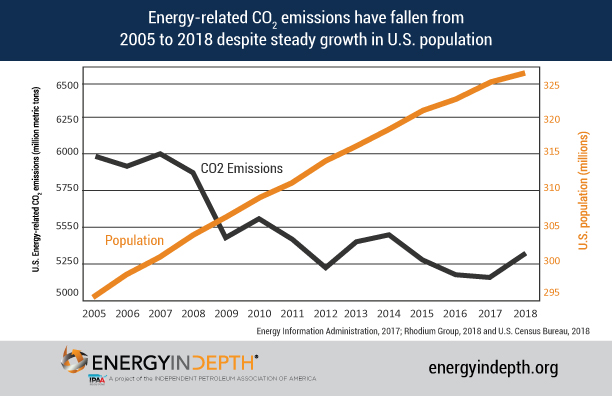 The decline has been largely attributed to natural gas. The Energy Information Administration has credited increased use of natural gas for almost two-thirds of the energy-related carbon reductions America has achieved since 2005.

Thank you to the @USChamber for recognizing the incredible innovation happening in @ENERGY’s #NationalLabs. We are in the midst of a transformational energy era with America leading the world in oil and gas production. #EnergyInnovates pic.twitter.com/qfgo3kPPbe

A frequent theme presented by the speakers centered around how energy innovation can enable the world to meet its climate goals as well as global energy needs.

In a conversation with U.S. Chamber President Suzanne Clark, Dio summed up the predicament facing the energy industry:

“The big challenge at hand right now is what we call the dual challenge. So, energy demand is going to increase, by about a third. But we need to provide a third more energy at roughly half the emissions.”

In 2017, the EIA projected that world energy use will increase 28 percent by 2040. At the same time, governments and international agencies have called for dramatic GHG emissions reductions by the same year.

Dio continued on to share how natural gas offers a path that could allow the United States, and the world, to cut emissions while still meeting growing energy needs:

"Natural gas is a huge part of the solution, not only as a bridging fuel but as a destination fuel. It's a fantastic backup for solar and a clean source of #energy." – @susan_dio, President and CEO of @BP_America #EnergyInnovates pic.twitter.com/WSr96nUh7U

Natural gas fulfills the criteria to meet near- and long-term climate goals: it burns cleaner than most fossil fuels, it is affordable, and it is plentiful.  A recent study published in Nature summarized Dio’s conclusion concisely: the increased use of natural gas in electricity generation contributes to long-term “climate stabilization objectives.”

Natural gas has already proven to be an effective tool to cut emissions. The fuel has allowed the United States to become a world leader in reducing CO2 emissions.

Several attendees and speakers also spoke about how natural gas is a solution to not only lowering emissions, but to eliminating energy poverty across the globe.

Energy poverty is the limited or lack of access to a reliable – and safe – energy source.

“Common sense is that people need energy. There’s a billion people out there who don’t have access to energy. We need to provide that energy and grow the middle class while curbing emissions. And we need energy technology at scale.”

In areas with limited or no access to energy, 90 percent of a household’s energy consumption is often derived from burning firewood, charcoal, agricultural waste and animal dung to cook – fuels that contributed to roughly 600,000 deaths in children under the age of 5 in 2012. In a 2015 report, the World Bank noted that half of the developing world’s population cooks primarily with wood, charcoal, coal, crop waste, and dung.

Unlike the fuel methods commonly used in energy impoverished regions, natural gas burns much cleaner. It also, notably, is easily transportable and affordable. For these reasons, experts have called natural gas a realistic option to dramatically improve the health and economy of developing countries, closing the gap on energy poverty.

Energy poverty is an unfortunate reality for far too many people. American energy – in all its forms – should be a welcome achievement and a welcome path towards energy security. #EnergyInnovates

Record-breaking natural gas production has enabled the United States to reduce emissions and supply the energy demands of a growing population.

Thanks to innovation, America is producing record amounts of affordable natural gas, and the United States will soon be the world’s top exporter of LNG. The proliferation of natural gas can help end energy poverty in developing countries like India, enriching the lives of large populations.

The Energy Innovates Summit brought together thought leaders from across the United States and globally, and a common theme emerged: oil and gas development will be key to taking on the world’s energy problems.

The entire video of the Energy Innovates Summit can be found here.