Josh Fox – director of the 2010 anti-fracking, scientifically-challenged and thoroughly debunked documentary “Gasland” – brought his “The Truth Has Changed” tour to Youngstown State University last week. Upon arrival, the New York theater director was greeted by a welcoming committee comprised of members of UA Local 396 Plumbers and Pipefitters, who were on hand to show their support for the oil and natural gas industry. 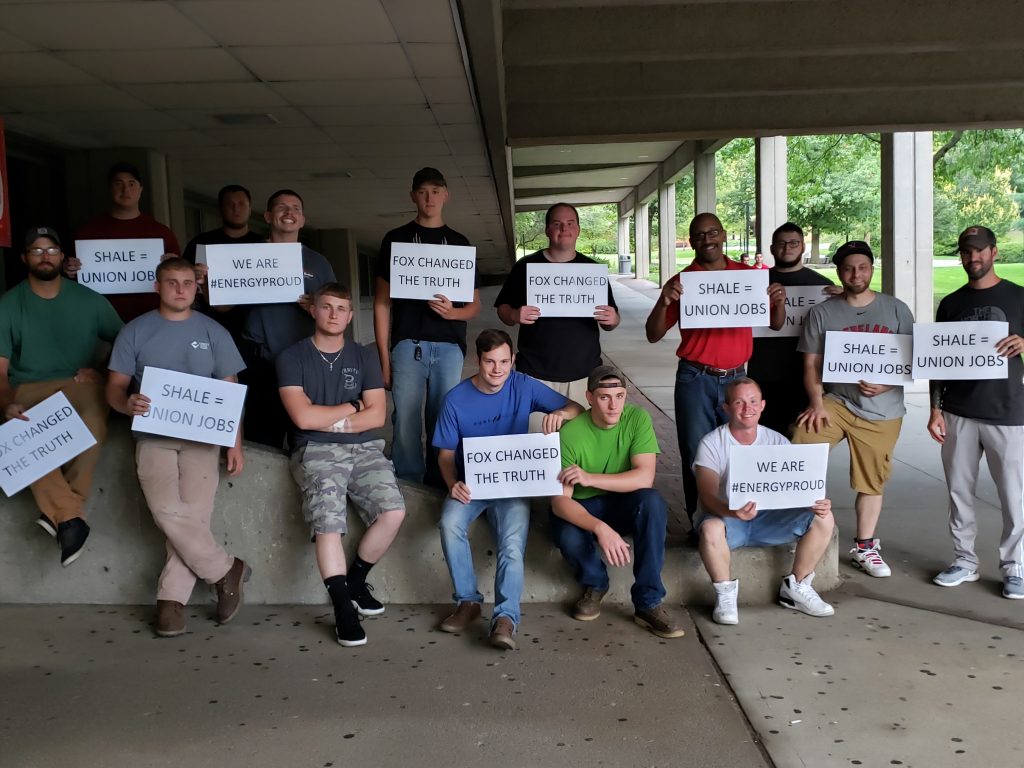 YSU professor and local anti-fracking activist Ray Beiersdorfer extended the invitation to Fox to perform on campus. Following the event, Fox headlined a fundraiser for the group behind the seven-times-rejected “Community Bill of Rights” which is gearing up for yet another attempt in the November election.

On campus, UA 396 members amassed outside Cushwa Hall holding signs and speaking out to passersby in support of the oil and natural gas industry they note has brought jobs and opportunity to the region.

Local 396 Business Manager Tim Callion has witnessed the incredible impact the industry has had for the region, its economy and its workforce since the onset of Ohio shale development began in 2011. Callion, who is also a U.S. military veteran, came out to show support for oil and natural gas development, and was able to talk with EID about what the industry has meant for northeast Ohio, in particular.

“For many years there were not a whole lot of opportunities here. The natural gas and oilfield has developed a lot of economic opportunity that the community, the workers & various companies have been able to revitalize themselves.”

Local 396 has been engaged in shale development and related projects since the beginning of development in the Utica. Its leadership had the foresight to set up an apprenticeship training program over six years ago to train enough workers to meet the demand, which has proven to be more than fruitful for the organization. Since then, 396 has been engaged in a number of shale-related projects in the tri-state area, including current construction of a new natural gas power plant in Lordstown.

Joe Longo, a UA 396 supervisor and Executive Committee Member, noted the industry has been operating in an environmentally friendly manner in the state, and provided a boon to job creation in the region. In talking with EID, Longo noted the positive impact the industry has had for him and his family, and the community as a whole.

“It’s very clean it’s very safe. I live by the plant we’re building in Lordstown, and I feel very safe, very comfortable having that plant, knowing that it was built right and built union.”

Longo also countered the false premise propagated by Fox and other members of the anti-fracking community, rejecting the notion that the protecting the environment and creating industry jobs were inherently and mutually exclusive of one another: “We want clean air we want fresh water, were 100 percent for that,” Longo said, “but we also want good paying jobs.”

Shale-related activities have supported thousands of union jobs in Ohio. As Ohio Laborers District Council pipeline specialist Ray Hipsher recently said, “The shale industry is hiring local workforce. That’s going to keep the money in the community, and the laborers doing the work are going to take pride and care of the quality of their work, because we are your neighbors.”

To date, thousands of Ohio operating engineers, laborers and pipeliners worked for almost all the major oil and gas companies operating in Ohio on various stages of oil and gas development last year, including pipeline and natural gas power plant projects.

At the end of the day, this region has seen what the safe, responsible development of our own oil and natural gas resources has brought in the way of jobs and economic activity.

Fox and his claims have been discredited at every turn by the scientific community. Ohio’s oil and natural gas industry is creating jobs and acting as good stewards of the environment in the process, and the members of 396 came out in numbers to counter any suggestion otherwise.

Following the Youngstown event and fundraiser, Fox hopped into his SUV and made the 175-mile drive to The Ohio State University or another performance. As usual, EID was on hand to cover Fox, and his remarkable inability to tell the truth. Stop back by tomorrow for a recap on Fox’s OSU “performance.”