Pipeline safety continues to increase across the country, according to a new report from the Association of Oil Pipe Lines and American Petroleum Institute.

The report explained that the “industry culture of ‘safety first, safety always’ and a commitment to zero-incident operations” is the cornerstone of this improvement that netted a more than 30 percent decline in the number of liquids pipeline incidents over the last five years. As API-AOPL Pipeline Safety Excellence Steering Committee Chair and President of Phillips 66 Pipeline Todd Denton said:

With data from the Pipeline and Hazardous Materials Safety Administration, the report found a correlation that while pipeline mileage and barrels per day increased nearly 10 percent, safety also increased across the key performance indicators from federal and state regulators. This is because comprehensive safety management systems and programs, including advanced leak detection and inspection technologies, have made the difference in safely operating pipelines to supply domestic energy daily. In 2021 about 135 billion gallons of gasoline were safely delivered to Americans.

One key element of the report that shows how far the industry has come is the fact from 2017 to 2021:

Despite misconceptions, the natural gas and oil industry have made strides to promote safe operations and programming across the energy supply chain. For example, last month API released two revised liquid pipeline leak detections standards that focused on improving operational integrity and advancing operators’ mitigation capabilities. The opportunity to consistently innovate and improve processes is a differentiating factor for the U.S. oil and gas industry, and is how pipeline operators were able to have a 30 percent decline in incidents over the last five years. 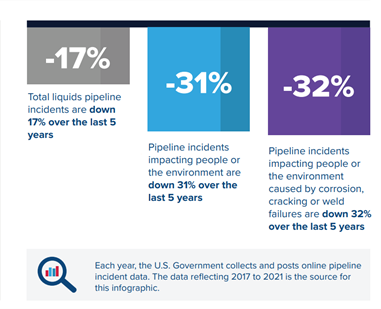 The oil and gas industry plays a major role in the economy by supporting over 11.3 million jobs nationally, even more impressive is that U.S. natural gas and oil companies have sent upwards of $1.1 trillion to federal, sate and local treasuries through their taxes, royalty payments and fees in the last decade. This is a prime example industry leading the way, which extends far beyond pipeline safety and into the numerous investments the industry makes to reduce environmental impact and encourage a low-carbon future.

As gas prices hover around over $4.37 per gallon and the Biden administration continues to undermine domestic oil and gas production to alleviate the pressures of the market, the industry has continued to go-to-bat for the people from demanding more efficient approval processes for pipeline projects to producers begging to ramp up their output to supply American consumers.

“American families saved over $200 billion annually in energy costs thanks to increased natural gas and oil production delivered by pipelines.”

There was never any doubt. But the AOPL report further solidifies that pipelines are safe and efficient ways to transport energy across American and is overwhelmingly vital to ensure every household has reliable and affordable energy.