Ohio’s plastic manufacturing industry is beating out China’s, thanks to its abundant natural resources that provide manufacturing and economic advantages, according to a new Shale Crescent USA study by JobsOhio.

The study debunks the long-held belief that importing plastic-based manufactured goods is more affordable, when in fact, increasing domestic production and making critical materials like plastics in Ohio has distinct advantages.

In a release, JobsOhio noted:

“However, since the COVID-19 pandemic spotlighted the financial and logistics benefits of shorter supply chains, Ohio has surpassed China as the world’s low-cost center for plastics manufacturing, thanks to advantages in cost, economic climate, and market access.” (emphasis added)

Ohio has long had a competitive standing when it comes to U.S. plastics manufacturing. In fact, this year, the Plastics Industry Association ranked Ohio as the No.1 state in the nation for plastics employment in its 2022 Size and Impact Report.

Ohio’s energy and transportation advantages are just some of the emerging key differentiators in manufacturing when compared to China. Let’s look at the highlights of the JobsOhio report:

The onshoring of U.S. manufacturing is directly correlated to manufacturers reaping the benefits of domestic production, and is good news for workers throughout the country and the Buckeye State. Ohio is a prime example of this: the state’s advanced infrastructure, highly-skilled workforce, and central location make it an ideal manufacturing hub. And importantly, Ohio and neighboring Pennsylvania and West Virginia have an abundance of natural resources to fuel manufacturing plants and provide ancillary benefits and market opportunities – and move industry away from China.

“China has lost its manufacturing competitive advantage and the annual $25 billion of exported plastic-based goods from China represent a vulnerable and accessible market share opportunity for U.S. operations.”

With an abundance of natural gas in Ohio to support the industry’s fundamental shift, the report calls out the U.S. shale gas revolution as the defining factor which resulted in low-cost natural gas and natural gas liquids, both of which are key components needed to produce plastic resin:

“Ohio, West Virginia, and Pennsylvania combined (Shale Crescent USA) now produce over one third of U.S. natural gas supply and over one and a half times more natural gas than the entire country of China. China is energy deficient and is reliant on global supply chains to either import plastic resin or produce resin from much costlier oil-based Naphtha.” (emphasis added)

In addition to Ohio’s energy advantages, the report highlights other key advantages for in-state production like transportation, proximity to major population centers, and cost.

“Industry observers recognizing the advantages of Ohio’s unique location within a day’s drive of 50 percent of the U.S. population and more than 70 percent of the end-to-end plastics industry supply chain.”

Comparatively, a standard container of finished goods originating in China can travel anywhere from 6,500 to 20,000 nautical miles just to reach a U.S. port and still need to be processed before being ready for national distribution.

Ohio-based plastics manufacturers have a tremendous advantage over Chinese competitors because their facilities are in a central location, and especially, because within that radius lies over one-third of U.S. natural gas production. By building in the center of customers, supply lines are shortened, and market demand is met more rapidly and effectively. 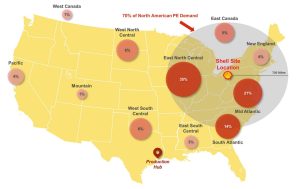 In addition, Ohio holds the edge over China on average electricity rates and manufacturing rates, with each being 38 percent lower. An advantage like this further closes the gap between Ohio manufacturing and China’s, signifying these fundament shifts are here for the long run.

An additional key advantage the report notes is that by onshoring domestic production to Ohio, global emissions are also reduced, providing a key sustainability benefit.

These results buoy a recent white paper from the Atlantic Council which underscores the importance of supporting a strong domestic plastics industry to protect the environment. George David Banks, the author of the report, argues that if the United States doesn’t step up to meet demand, countries with less stringent environmental laws – like China – will fill the gap and raise overall emissions.

In a webinar by the contributors of the report Thursday, experts discussed the trends that created this new environment where onshore plastics supply chains are becoming both the low-cost and most effective solution for manufacturers.

By building on top of the necessary feedstock plastic manufacturers need, the industry is drawn to Ohio and the Appalachian region. The Shell Ethane Cracker Plant in Monaca, Pennsylvania recently became fully operational, thus making it the first major polyethylene manufacturing complex in the Northeast. The plant uses natural gas feedstock from the Marcellus and Utica shales, again highlighting the economic and consumer benefits that natural gas provides.

Bottom Line: Ohio and the greater Appalachian region are helping to lead the country towards a low-carbon future by decarbonizing its industrial base, and domestic plastics manufacturing is a key contributor to this reality poised for long-term success. Ohio’s abundance of natural gas, thanks to the Marcellus and Utica shales, is a key economic, climate and manufacturing boon.