The City of Pittsburgh hosted one of the largest regional gatherings of natural gas and oil industry CEOs, elected officials and thought leaders this week during the annual Shale Insight conference. But while discussions inside the conference on important topics like energy security, energy poverty, health as it relates to shale development and the incredible economic impact the region has seen from record-shattering natural gas production were ongoing, Pittsburgh Mayor Bill Peduto was outside giving a speech to a small gathering of protesters seeking to halt Pennsylvania’s shale development and the industries it is attracting to the region.

During his comments, the mayor made no mention of the incredible economic impact the City of Pittsburgh and the Pittsburgh metropolitan area have experienced from this development. Nor did he bring up the myriad of studies showing fracking has not been a threat to the region’s water and that its air has improved over the last decade of shale development. Instead, he proudly discussed the city’s ban on fracking – which he helped get enacted in his former capacity as a city councilman – describing it as “the first ban on fracking in the world” and implied that under his administration the city would fight “many, many battles” against the shale-related industries that are helping the region to prosper, saying:

“It’s always been about the water.”

“You know, 200 years ago people came from Europe – 300 years ago from Europe – and they looked at the water and saw a way to get from one point to another. And they built factories along the water, and they became the roadways that went out to the West. Today we understand our rivers is something such, more important than a roadway. We see it as the sustaining of life once again. And it’s always been about Pittsburgh – our rivers, our water.”

“We all know nothing is more important to life than clean and abundant water. Western Pennsylvania is blessed with this resource, and we must all work together to protect it. The Mayor’s office has long fought for this cause. Mayor David Lawrence, with the support of Richard King Mellon and other leaders, recognized this and pushed through the nation’s first Clean Air and Clean Water Act in the 1940s. In 2010, along with Councilman Doug Shields who’s with us, City Council was able to push forth the first ban on fracking in the world. The City of Pittsburgh has paid its price through the first industrial revolution. We had worked in order to be able to take the steps to clean our air and clean our water, and we weren’t going to take that step backwards.”

“Yes, listen there are many, many battles that will be fought. It doesn’t start and it doesn’t end on one day. It’s a continuation of many different types of industries that will be legacy industries of what was Pittsburgh. The question is what will we do here to play offense and not continually try to play defense? The opportunities are abundant.  This begins, and it starts, with what we do with our air and with our water. And we look forward to partnering with all of you, and with all those different battles, in order to make sure that Western Pennsylvania preservation of our air and water is at the foremost front of what we do as a region.”

What Mayor Peduto’s speech lacked was all of the evidence demonstrating that Pittsburgh can have a future that is both prosperous and protective of the environment – and it’s already doing so thanks to the shale it sits upon. 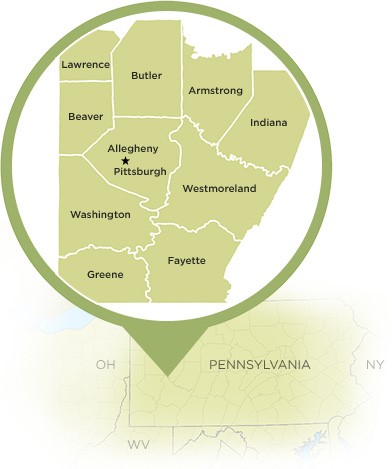 The Pittsburgh metropolitan area – a 10-county region in Southwestern Pa. – has been hailed as the potential energy capital thanks to shale development in the region. By 2016, 36 “leading energy companies” had established headquarters in the metropolitan area, regionally employing an estimated 27,980 people, according to the Pittsburgh Regional Alliance. It’s also helping to attract new manufacturing facilities and to spur reinvestment in what Peduto referred to as Pittsburgh’s “legacy industries” like U.S. Steel.

And that’s despite the ban on fracking that the Pittsburgh City Council pushed through in 2010 that prevents drilling within the actual city’s borders.

In stark contrast to the city’s ban on fracking, the broader Pittsburgh metropolitan region in 2017 represented nearly half of all wells drilled in the state, more than one-third of the natural gas produced (a whopping 2.1 trillion cubic feet), and has been the recipient of more than one-third of the total shale impact fees. And Allegheny County – where the city is located – has actually received the largest grants from the Marcellus Legacy Fund to date.

In fact, in 2014 the City of Pittsburgh received a Marcellus Legacy Fund grant for $802,990 for a PennWorks project to “construct, expand or improve water and wastewater infrastructure related to economic development.” Those funds have since been renewed for the project at the former mill facility at Lawrenceville Technology. In other words, the shale industry contributed nearly a million dollars to help the city improve its water quality, and yet that was never mentioned in a speech from the leader of the city about protecting water quality for future generations.

Further, Mayor Peduto failed to mention that more than 30 peer-reviewed studies and scientific reports have found that fracking is not a threat to groundwater, many of which have been focused on Pennsylvania. In just the last year, those Pennsylvania reports include:

Similarly, there are a multitude of studies and reports finding that Pennsylvania’s air quality has improved since the shale revolution began, in large part because of the switch to natural gas-fired power generation that has been spurred by the abundance of gas in the region. They also show that the oil and natural gas industry has reduced its emissions at the same time as this production has soared.

The bottom line: Pittsburgh – both the city and the 10-county region – are experiencing the benefits of shale development in a manner that is protective of the environment in the region. And that’s something everyone who headed to Pittsburgh this week – whether to attend the conference or the small protest outside – should be celebrating.