Thanks to the shale revolution, the United States went from energy scarcity to energy dominance. An abundance of natural gas produced domestically allowed the country to begin exporting liquefied natural gas (LNG) from the lower-48 in 2016 and within a few short years become a global LNG exporter.

As 2021 came to close, data show that the United States just became the world’s biggest exporter of LNG for the first time in history after a rapid rise the past five years.

“Output from American facilities edged above Qatar in December due largely to a jump in exports from the Sabine Pass and Freeport facilities, according to ship-tracking data compiled by Bloomberg. Cheniere Energy Inc. said last month that it achieved its first cargo from a new production unit at its Sabine Pass plant.” 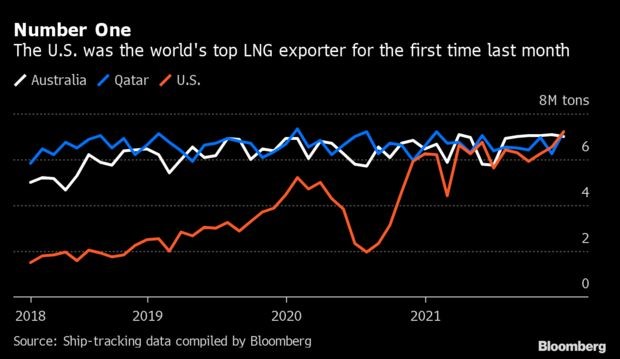 “U.S. LNG export terminals sent out a record 1,043 cargoes in 2021, with Asian nations making up nearly half of the destinations and Europe making up one-third, ship tracking data compiled by Bloomberg shows.”

America’s shale revolution has transformed the global energy landscape, but its impacts are not over yet. Since the first LNG exports in 2016, American export capacity has increased rapidly and additional export capacity expansions at the Sabine Pass, Corpus Christi, and Calcasieu Pass facilities are expected to be completed by the fall of 2022. Once these projects are in service, the United States will have the world’s largest LNG export capacity.

Just over 20 years ago, the common consensus was that the United States was running out of natural gas and facing future energy shortages. Yet today, thanks to technological advancements and innovation, U.S. natural gas is helping reduce power sector emissions, ensure energy security domestically, and transform global energy markets to decrease emissions in what some have called the “biggest green initiative on the planet.”

Imagine what the next decade will bring.