There’s a worrying trend gaining traction in California, the Boston suburbs, and a few other liberal enclaves across the country. In the name of meeting ambitious decarbonization and emissions goals, a few dozen cities are considering – or have passed – ordinances that look to limit or outright ban natural gas in construction.

But the bans are meeting resistance. Consumers and businesses, concerned over the impact the bans would have on lower-income families, local restaurants and others, have been pushing back. In February, Arizona passed a bill with bipartisan backing that prevents cities from forbidding the use of natural gas. Other states, including Missouri, Minnesota, Oklahoma, Tennessee and Mississippi are considering similar legislation.

EID’s latest fact sheet takes a closer look at what people are saying about how these bans could end up harming the very communities their proponents say they are trying to protect. 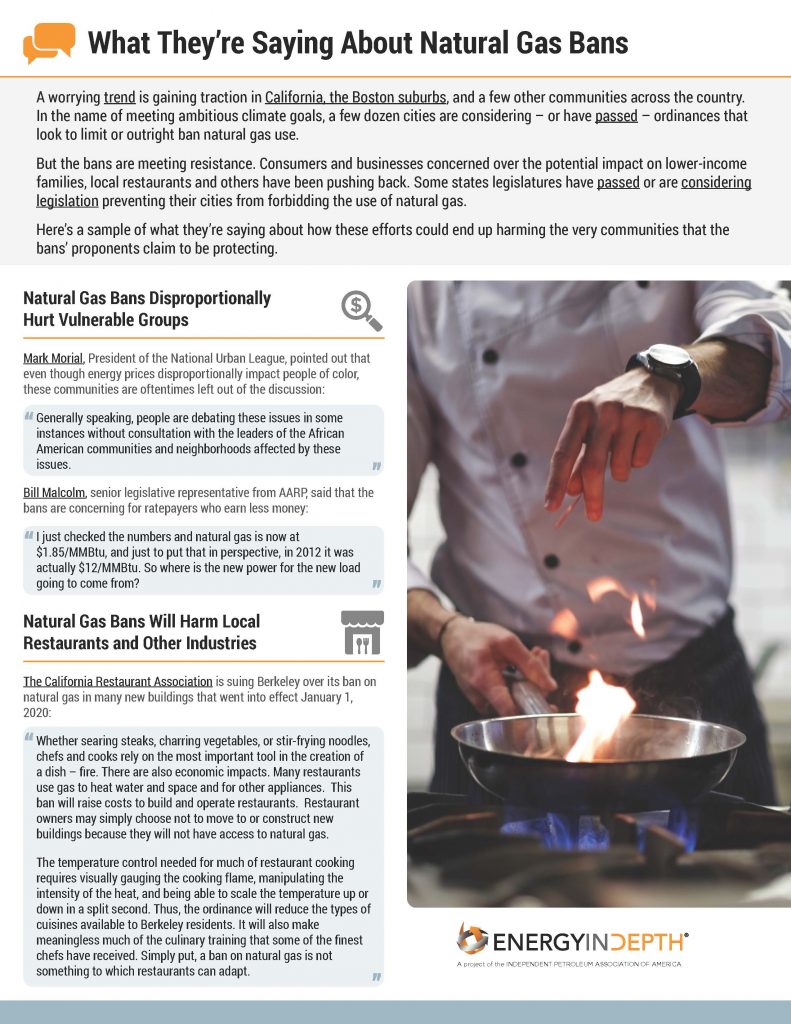 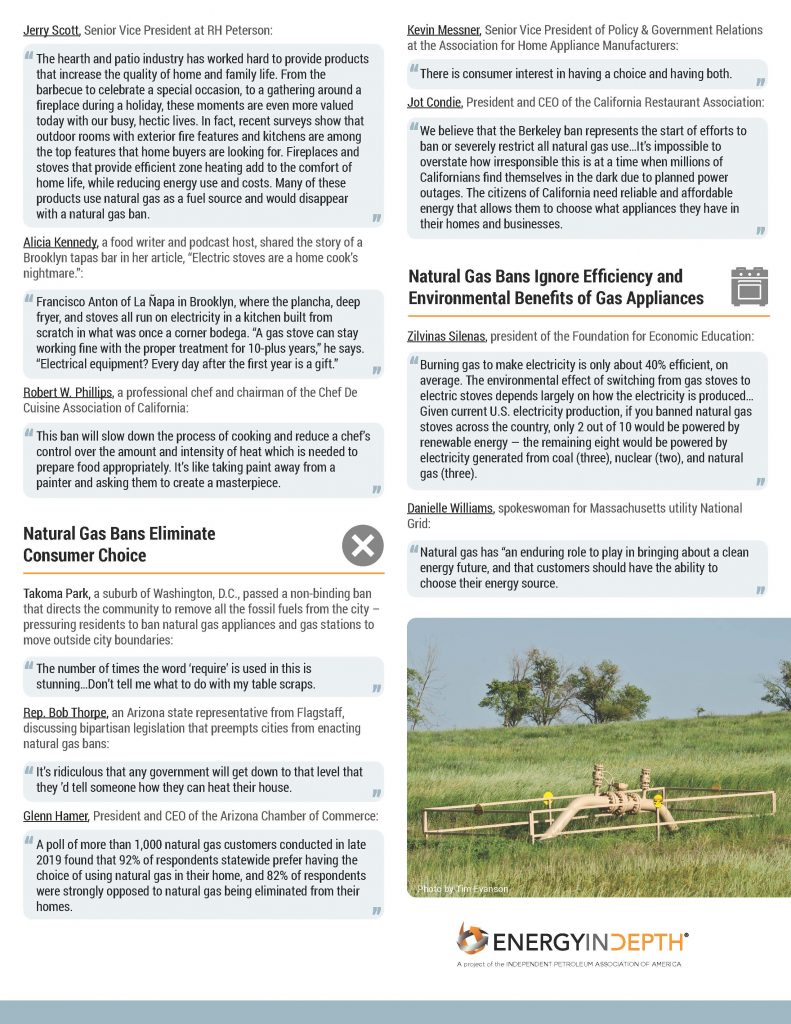 Mark Morial, President of the National Urban League, pointed out that even though energy prices disproportionally impact people of color, these communities are oftentimes left out of the discussion:

“Generally speaking, people are debating these issues in some instances without consultation with the leaders of the African-American communities and neighborhoods affected by these issues.”

“Electrification is something that sounds good, but the regulatory policy being discussed fails to take into account the actual costs that will fall on consumers.”

Alicia Kennedy, a vegetarian food writer, warned that the discussion must take into account other related issues:

“The conversation around the necessary move away from natural gas must go beyond ‘electrify everything’ to consider the sociopolitical and economic context. No coverage I’ve read of this push has noted the marked differences in electricity costs across the U.S. and its colonies, not to mention the global disparities.”

“I just checked the numbers and natural gas is now at $1.85/MMBtu, and just to put that in perspective, in 2012 it was actually $12/MMBtu. So where is the new power for the new load going to come from?”

Natural Gas Bans Will Harm Local Restaurants and Other Industries

The California Restaurant Association is suing Berkeley over its ban on new gas pipelines that went into effect January 1, 2020. The group emphasizes the threat the ban poses to local eateries:

“It would be difficult to overstate these impacts, which are numerous. Whether searing steaks, charring vegetables, or stir-frying noodles, chefs and cooks rely on the most important tool in the creation of a dish – fire. There are also economic impacts. Many restaurants use gas to heat water and space and for other appliances.  This ban will raise costs to build and operate restaurants.  Restaurant owners may simply choose not to move to or construct new buildings because they will not have access to natural gas.

“The temperature control needed for much of restaurant cooking requires visually gauging the cooking flame, manipulating the intensity of the heat, and being able to scale the temperature up or down in a split second. Thus, the ordinance will reduce the types of cuisines available to Berkeley residents. It will also make meaningless much of the culinary training that some of the finest chefs have received. Simply put, a ban on natural gas is not something to which restaurants can adapt.”

Jerry Scott, senior vice president at RH Peterson CO, which specializes in fireplaces and barbeques, said that his industry depends on demand for barbeques and fire pits:

“The hearth and patio industry has worked hard to provide products that increase the quality of home and family life. From the barbecue to celebrate a special occasion, to a gathering around a fireplace during a holiday, these moments are even more valued today with our busy, hectic lives. In fact, recent surveys show that outdoor rooms with exterior fire features and kitchens are among the top features that home buyers are looking for. Fireplaces and stoves that provide efficient zone heating add to the comfort of home life, while reducing energy use and costs. Many of these products use natural gas as a fuel source and would disappear with a natural gas ban.”

“Francisco Anton of La Ñapa in Brooklyn, where the plancha, deep fryer, and stoves all run on electricity in a kitchen built from scratch in what was once a corner bodega. ‘A gas stove can stay working fine with the proper treatment for 10-plus years,’ he says. ‘Electrical equipment? Every day after the first year is a gift.’”

Robert W. Phillips, a professional chef and chairman of the Chef De Cuisine Association of California, noted that these bans threaten the livelihood of chefs:

Takoma Park, a suburb of Washington, D.C., passed a non-binding ban that directs the community to remove all the fossil fuels from the city – pressuring residents to ban natural gas appliances and gas stations to move outside city boundaries. Resident Maxine Hillary is incensed over the heavy-handedness of the proposal, criticizing the ban as “insensitive and draconian”:

“The number of times the word ‘require’ is used in this is stunning…Don’t tell me what to do with my table scraps.”

“It’s ridiculous that any government will get down to that level that they ’d tell someone how they can heat their house.”

Glenn Hamer, President and CEO of the Arizona Chamber of Commerce, noted that customers want choice:

“There is consumer interest in having a choice and having both.”

Jot Condie, President and CEO of the CRA:

“We believe that the Berkeley ban represents the start of efforts to ban or severely restrict all natural gas use…It’s impossible to overstate how irresponsible this is at a time when millions of Californians find themselves in the dark due to planned power outages. The citizens of California need reliable and affordable energy that allows them to choose what appliances they have in their homes and businesses.”

Mike Lastort, a resident of Takoma Park, disapproves of the heavy-handed nature of his community’s ban and believes it is poorly planned:

“I guess I’ve got a bit of a ‘Don’t tell me what to do’ attitude sometimes when it comes to government. I don’t want government to say, ‘Do this just because I said so.’ And that seems kind of like what Takoma Park did with this proposal; it doesn’t seem like they thought [it] all the way through.”

Zilvinas Silenas, president of the Foundation for Economic Education, points out that natural gas stoves are more efficient due to the state of the energy mix:

Danielle Williams, spokeswoman for Massachusetts utility National Grid PLC, says that natural gas has a role to play in the energy mix:

“Natural gas has ‘an enduring role to play in bringing about a clean energy future, and that customers should have the ability to choose their energy source.’”

“Natural gas has reduced Massachusetts emissions by 68 percent in 25 years while playing a key part in the state’s improving clean air position by replacing dirtier fuels.”

“At a time of economic uncertainty, [natural gas] is an economical and stable option that helps keep energy bills low.”

Jim Nathanson, executive director of The Empowerment Alliance, points out that families depend on low energy prices:

“Banning the use of affordable natural gas would be devastating for American families. The reaction from the state legislatures is an effort to protect millions of Americans from higher energy prices.”