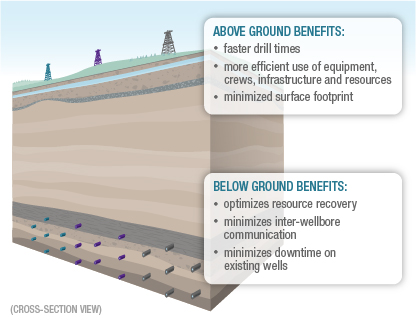 Experimental development has helped Encana increase its productivity in the Permian, contrary to WSJ narrative

The story of the Permian Basin in West Texas and Southeast New Mexico in recent years is nothing short of incredible. We’ve known for a century that there’s good rock there, but did anyone ten years ago – or even ten months ago – think that the Permian would overtake Saudi Arabia’s Ghawar Field as the highest producing oilfield in the world? It’s becoming difficult to overstate the significance of what American roughnecks and engineers have been able to do.

Unfortunately, that kind of success always brings along naysayers and cynics. It can’t be that good, they claim. This Eeyore syndrome has accompanied the success of the American energy industry throughout its entire life, most notably with repeatedly debunked theories like “Peak Oil” or, more recently, the “shale bubble.”

Which brings us today, as a story in the Wall Street Journal examines what’s known as “Cube” development in the Permian Basin. Even though the focus area is something the WSJ admits was merely an “experiment” from several years ago, the story still suggests that experiment is indicative of a massive problem all across the Permian Basin. The emblematic paragraph reads:

“The results of Encana’s cube—the premier example of scaling up in the heart of the U.S. oil boom—suggest that operators have yet to find a solution to the challenge of production losses that occur when new wells are drilled too closely to old ones. The problem affects dozens of producers, which face the risk of eventually running out of locations, and some executives and analysts have warned that U.S. production could peak far sooner than expected.” (emphasis added)

Is the Permian Basin just a giant Potemkin village? Are the companies that have completely transformed global energy markets inflating their capabilities? The short answer is no.

A quick look at Encana’s website reveals a fact sheet about Cube development and the specific experimental case (the “RAB Davidson Occupation”) that the WSJ erroneously extrapolated into a structural defect of the Permian Basin. How do we know it’s erroneous? Because the company provides this helpful chart: 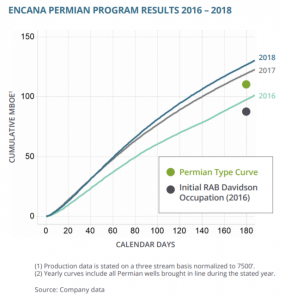 There are several facts worth emphasizing from this chart.

Each subsequent year shows an improved production curve since the RAB Davidson Occupation. If this experiment were representative of an intrinsic problem in the Permian Basin – not just with Encana but with other major producers, as the WSJ alleged – then how is it that the company has been able to improve its efficiency each year since then?

Far from the WSJ’s claim that companies “have yet to find a solution,” the company on which the newspaper focused has clearly incorporated the learnings from its RAB experiment.

To be fair, the WSJ quietly admitted that the data may contradict its own narrative. But it did so in a throwaway line halfway through the story, once the reader had already been bombarded with paragraphs of doubt, filled with phrases like “the wells don’t perform” and “a substantial resetting of expectations”:

“Newer Encana multiwell sites have performed well, and the 33-well development was successful when viewed as an early experiment, according to Rystad Energy.”

According to available data on Encana’s website, the company has drilled more than two dozen multi-well Cubes. The WSJ focused on the very first one completed. Does anyone truly believe that operators who implement innovative approaches to drilling – including ones that increase output and minimize surface impacts – don’t use each operation to improve the subsequent one?

Encana’s website even notes: “Our first RAB Davidson occupation in 2016 was designed with tighter inter-well spacing than successive designs.” Put differently: this experiment is not representative of our subsequent Cube developments.

Most Americans are enjoying Independence Day, and thanks to the fracking boom, we’re also enjoying an unprecedented level of energy security. Conflicts in the Middle East and Venezuela aren’t impacting prices at the pump as much as they have in the past. We’re on track to become a net energy exporter by next year. Dollars are flowing back to the United States as we sell increasing volumes of oil and natural gas to our trading partners, and manufacturers are investing hundreds of billions of dollars here to take advantage of low-cost energy from the shale boom.

All of that was made possible because American innovators used innovation and experiments to improve productivity. We don’t define the shale revolution by the first vertical well fracked in the Barnett Shale; we define it by how production has soared as American companies incorporated horizontal drilling and other technologies to improve upon what began in North Texas.

We would do well to view what’s currently happening in the Permian Basin through a similar lens, especially since we know it contains what the U.S. Geological Survey recently described as the “largest continuous oil and gas resource potential ever.”