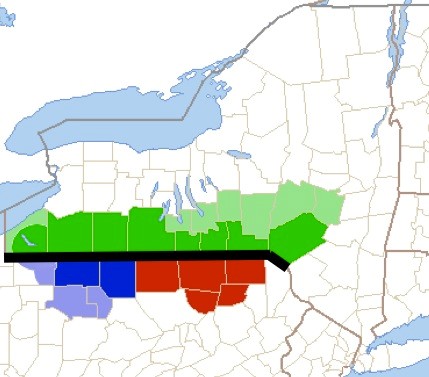 The Twin Tiers include the border counties from Chautauqua to Delaware counties in New York, and McKean to Susquehanna counties in Pennsylvania, as well as several adjacent counties. Source: Natural Gas Now

This year marks the 10-year anniversary of shale development beginning in earnest in the Marcellus and throughout the country. And as recent media spotlights have demonstrated, an unfortunate case study has developed during this time period in the Twin Tiers – the Northern Tier of Pennsylvania and Southern Tier of New York. These once strikingly similar regions now have vastly different economies that can be traced to the shale opportunities afforded Pennsylvania and denied New York.

“The Southern Tier, a group of counties that border Pennsylvania, has been in economic decline for decades. But a decade ago, a promising opportunity seemed to come along: shale gas. Rigs sprung up across Pennsylvania, and some of the economic benefits even bubbled over into the Southern Tier.

“For farmers in particular, it seemed like a godsend: Land was in demand, and land was what they had. [Tioga Co., N.Y. farmer Kevin] Frisbie, and others like him, signed contracts trading access to their property for cash and royalties. At the time, many felt [N.Y. Gov.] Cuomo was on their side, because he’d campaigned on revitalizing the upstate economy.

The fallout of Gov. Cuomo’s decisions were encapsulated in 2017 by the Pennsylvania Manufacturing Association (PMA) in a video called “The Dividing Line: PA vs. NY Natural Gas Economics.” E.J. McMahon, Research Director for the Empire Center for Public Policy and an adjunct fellow at the Manhattan Institute, explained to PMA,

“What [New York] state has been doing basically is shutting off an avenue of growth.” (2:53)

“The state’s policies are basically shutting off any chance for a future for so many thousands of people in the Southern Tier.” (3:04)

And Julie Lewis, a New York landowner who travels across the border to Pennsylvania for work, told PMA,

“When New York limited or essentially banned high volume hydraulic fracturing, it sort of ended a significant opportunity for the state, and for landowners, and for the communities. I mean, if you look at what’s going on here in Pennsylvania, the opportunities are abounding and it’s not just for landowners. You see tax incentives. You see community philanthropic giving going up, and community organizations that benefit from this. And New York has missed out on that opportunity.” (16:16)

Here are a few data points showing just how much “New York has missed out” on the shale opportunity:

Both New York and Pennsylvania have a long history of oil and gas development, dating back to the 1800s. In fact, Pennsylvania is home to the first U.S. oil well, while New York has the first U.S. natural gas well. As such, the two states had relatively similar Gross Domestic Product (GDP) contributions from the “mining, quarrying and oil and gas” sectors prior to the shale revolution. But that changed dramatically after the shale development took off in Pennsylvania, as the following Bureau of Economic Analysis (BEA) chart shows. 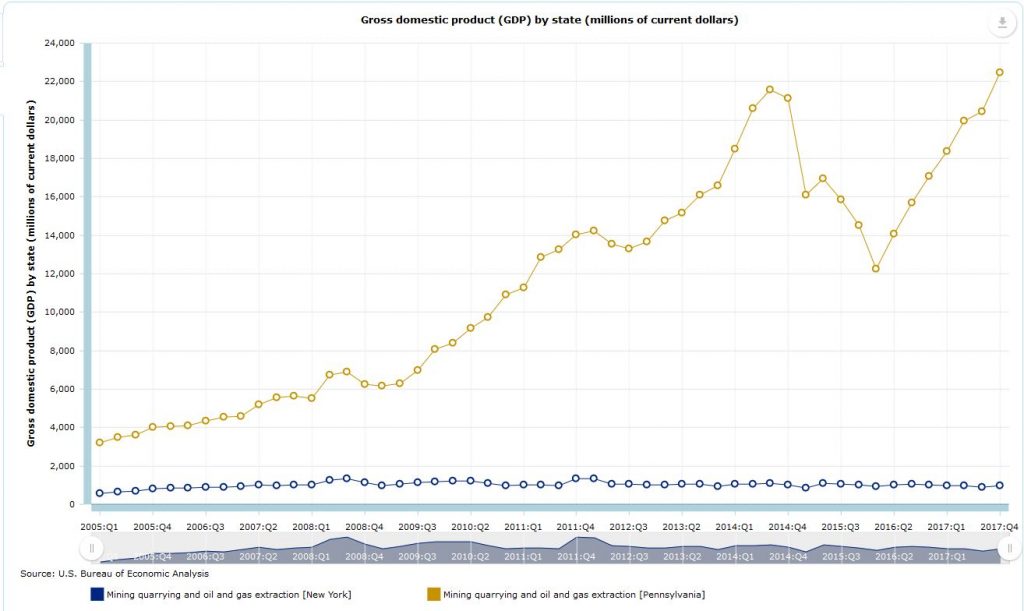 Another interesting GDP category comparison between the two states is manufacturing. 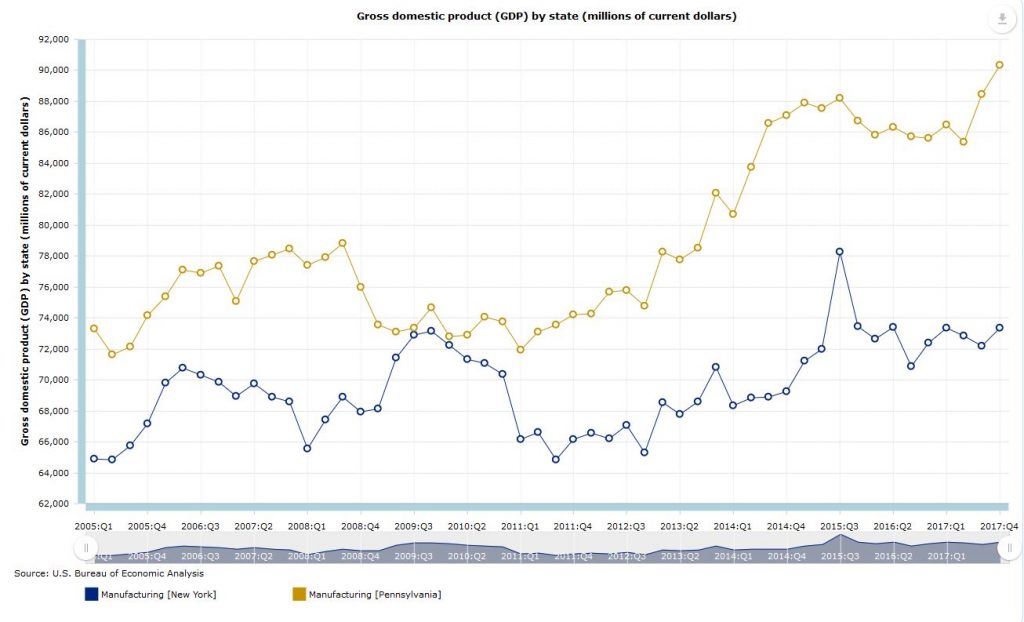 In New York’s Southern Tier counties, many manufacturers had layoffs or closed their doors. As Lewis told PMA in 2017,

“Well, in New York state in years’ past, there’s been a lot of manufacturing in the state that supported the local community. …The loss of these types of jobs has been extremely harmful to the community, and there really isn’t anything else that’s replaced it.” (17:48)

In contrast, Pennsylvania manufacturing has been experiencing a resurgence across the state. In the Northern Tier, an abundant supply of natural gas has enabled companies like Towanda Metadyne to have a new local market for its business, which includes making drill bits out of tungsten.

And Procter and Gamble’s Wyoming County factory – which supplies the world with diapers, toilet paper and paper towels – is completely self-sufficient thanks to the shale beneath its property. As StateImpact reported in 2012, this not only benefits the company’s bottom line, but Pennsylvania’s environment, as well:

“Starting February of 2013, Pampers and Luv’s diapers, as well as Charmin’ toilet paper and Bounty paper towels will be manufactured completely off the grid, using P&G’s own Marcellus Shale gas to power the plant, and fuel its fleet of trucks.

“Not only does that save the company money, but it cuts down on lost gas that had to travel up from the Gulf of Mexico.

“The methane that comes out of P&G’s wells is pipeline quality, meaning there’s not much processing that has to happen before it goes to market, or starts generating electricity for the plant.

“With two onsite compressors and a fueling station, the company has eliminated their use of 400,000 gallons of diesel fuel a year. Fried says the emissions reduction is equal to taking 145 cars off the road.

“He says an added environmental benefit is cleaner burning natural gas from the Marcellus compared with the gas brought up from the Gulf Coast.”

The manufacturing potential in other parts of Pennsylvania are even more tremendous thanks to the wet gas – natural gas rich with ethane, propane, butane and other natural gas liquids (NGLs) – found in abundance in the southwestern portion of the state. Those NGLs have attracted a multi-billion dollar ethane cracker facility and could help Pennsylvania to become a major plastics manufacturer in the near future. The benefits from this manufacturing renaissance will be statewide, with the potential for billions of dollars to be invested in the Commonwealth.

All of this shale-related activity has also spurred job growth in Pennsylvania. But, as E&E News reported, that hasn’t been the case in New York.

“But as manufacturing began to contract in the United States, the Southern Tier experienced a convulsion. Since 1990, its total employment base has declined by more than two-thirds, according to the Federal Reserve Bank of New York. Job growth continues to lag well behind the state average. By some metrics, the Southern Tier hasn’t recovered from the Great Recession.”

That’s not to say that businesses located in New York have not been able to benefit from the opportunities across the border. Brad Robinson, Operations Manager and vice president of Robinson Contracting in Candor, N.Y. told PMA,

His company began doing contract work constructing well sites over the border in Pennsylvania. The result, in his words, was a “phenomenal turnaround”:

“And probably two years later we were in the seventies. And at that point there was so much work in terms of gas stuff – basically all you needed to do was answer the phone because they needed competent help. …So for us it was a phenomenal turnaround. I mean we went from being in really somewhat dire straits to being as busy as we could handle.” (12:10)

The Twin Tiers are comprised of very rural counties with long histories of agriculture. In recent years, the agricultural industry – and dairy farmers in particular – have struggled with low prices. As E&E News reported, unlike in Pennsylvania, New York’s farmers haven’t had shale to help “shelter” them from this price-slump. The outlet continued,

“As for the Southern Tier, Cuomo has spent billions in an attempt to guide its economy toward new industries. But farmers here say they don’t have the luxury of time. Milk prices are stuck in a four-year slump, and the state lost over 1,300 dairy farms from 2007 to 2017. New York dairy farmers see friends in Pennsylvania who, in the same market conditions, are pulling through with the help of shale.”

In fact, a 2015 Bradford County Conservation District (BCCD) study analyzed farms in Bradford County from 2007 to 2012. During this time period, the county had 1,106 shale wells drilled – more than 75% of the 1,400 plus wells in the county today. Some of the study’s topline findings include:

“Here in Wyoming County, compared to the Southern Tier of New York, we’ve seen a lot of resurgence in our agriculture industry. If you drive by a local farm building, you’ll see they have brand new farm buildings, brand new tractors – they’ve been kind of able to give their farm a new life. We’ve also seen agriculture grow in areas of – you know, new agricultures. We have grape farms and we have this whole Nimble Farms Vineyards and Winery. And we have this whole industry of vineyards and berry farming and some different things that agriculture has really had this new life breathed into it because of the natural gas industry.” (21:31)

The bottom line that these stories and the data show is that New York, and the Southern Tier in particular, has missed out on an incredible opportunity. And it’s obvious just across the border in Pennsylvania. As Lewis told PMA,

“Since drilling has come in here, there’s been a huge uptick in economic activity, diversification to the economy, and it benefits everybody. It’s not just people who are landowners. And you can see a revitalization here. You can see an uptick in business. And there may be ebbs and flows in the amount of activity that occurs, but it hasn’t left. It’s here and it’s here to stay.” (16:49)

And it’s done all of this without the claims of widespread water contamination and health impacts – that were used to justify denying the Southern Tier these opportunities – coming true.