The U.S. oil and natural gas industry is committed to reducing its environmental footprint.

That means we’re investing in technology to detect methane leaks sooner and fix them faster, and developing solutions like carbon capture and storage that will benefit not only our own industry, but other energy intensive sectors and industries – ensuring the United States continues to manufacture our goods and produce our energy here at home and does so with the smallest environmental impact we can.

Regardless of these efforts, the significant progress that’s been made and the ever-growing importance of providing reliable, affordable energy across the globe, there are those that want to see a future where all oil and gas is kept in the ground.

A recent study from Cornell University professor Robert Howarth and Stanford University’s Mark Jacobson is one such example of this with its claims that hydrogen derived from natural gas and utilizing carbon capture and storage technology (blue hydrogen) somehow has worse emissions than natural gas. If this sounds familiar, it may be because Howarth is the same researcher who has spent years inaccurately claiming lifecycle natural gas emissions are worse than those of coal by using limited and dated data on New York coal production emissions and applying them to global estimates, while simultaneously overestimating oil and gas methane leakage rates.

Unsurprisingly, the study calls for society “to move away from all fossil fuels as quickly as possible,” based on highly criticized previous research and cherry-picked assumptions.

The study was funded by the Park Foundation – which proudly displays on its website that it’s committed to “the ‘keep it in the ground’ philosophy,” “resisting all new gas and oil drilling,” and “resisting all new gas and oil infrastructure buildout,” and funds research and journalism that adheres to these philosophies. In fact, the Park Foundation funded the methane research that is the cornerstone of this latest hydrogen study.

Further, the research was peer-reviewed by at least one writer who has been vocally opposed to the use of fossil fuels for anything, including hydrogen. Dominic Eagleton, a senior campaigner at Global Witness, recently wrote that blue hydrogen “is fossil fuel industry greenwashing,” and added to the bottom of the piece:

“Global Witness is working to end governments’ financial and policy support for the fossil gas industry and accelerate the transition to genuinely sustainable energy sources. This includes calling out sham solutions like ‘blue hydrogen’ for what they are: myths created by fossil fuel companies to maintain their economic interests.”

Despite all of this, the New York Times yet again jumped at the opportunity to showcase activist research – even going so far as to defend the study on Twitter when scientists questioned the assumptions and findings – and promptly ignored any progress made by oil and gas industry to lower emissions. 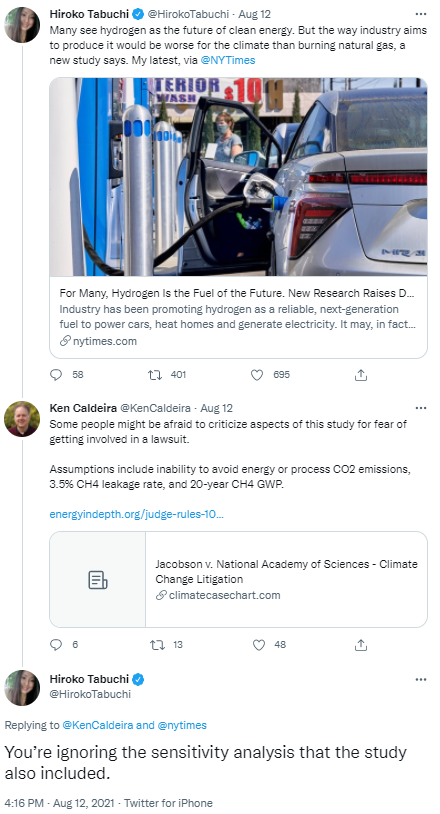 Notably, the Times’ article includes quotes from Food and Water Watch criticizing Congressional efforts to set up hydrogen hubs around the country. Yet, nowhere in the article – or the study for that matter – is it disclosed that Howarth sits on the board of directors for the very same organization, a group that proudly touts its goals to ban fracking, end fossil fuel development and call “foul” on what it calls “fake solutions to climate change.” This includes any solution that does not “keep fossil fuels in the ground.”

The group has been vocally opposed to the Biden administration’s inclusion of hydrogen in its budget proposal because it “does not provide the bold move away from fossil fuels our climate crisis requires,” and actively fought against hydrogen projects in New York and Los Angeles this year.

Also not mentioned is that Jacobson is a board member and co-founder of the Solutions Project, an organization that similarly seeks to swiftly transition to 100 percent renewables.

Neither of these researchers are strangers to criticism: Jacobson lost a lawsuit with critics of his renewable jobs transition research and the journal that published the critique just last year after initially suing the 21 researchers who said in a peer-reviewed paper that his findings had “significant shortcomings,” “errors, inappropriate methods, and implausible assumptions.” Even the New York Times highlighted some of the immediate criticism to Jacobson’s research back in 2013. 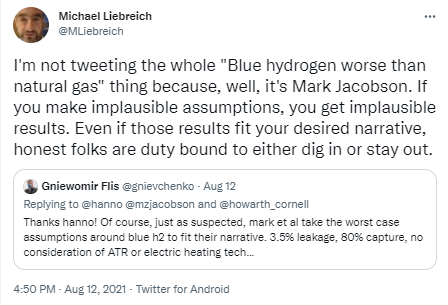 And Howarth’s methane emissions research – which is the cornerstone of the hydrogen study and claims leakage rates are significantly higher than nearly any other research – has been criticized extensively by the scientific community over the last decade. In 2011, the Times’ Andy Revkin wrote:

“One thing that disturbed me and some of the scientists I consulted was the big gap in the definitiveness of [Cornell’s] abstract summary and the actual paper. … I find that they are more value judgments than scientific judgments.”

In his most recent publication of that research, an anonymous peer-reviewer called Howarth’s conclusions “far-reaching” and “premature”, explaining:

Yet, Howarth seemed shocked that this latest study was met with the same swift condemnation from the scientific community. 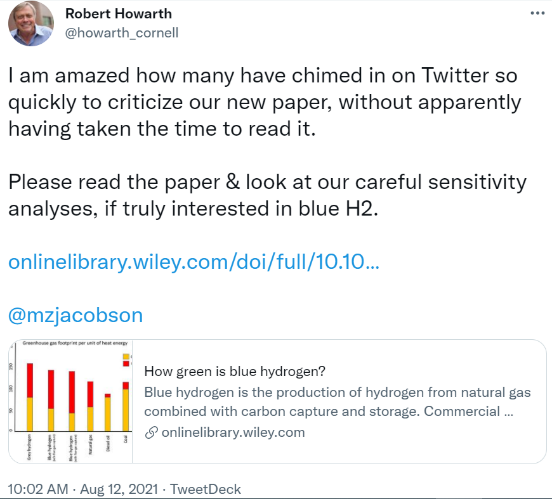 Notably, while there were plenty of criticisms, most of which – as they have been saying for more than a decade – focused on the use of a 20-year global warming potential over the standard 100-year GWP, the disregard for technological advancements and capabilities and the assumption of significantly high, unrealistic methane leakage rates, none of these scientists or experts were quoted in the New York Times article. 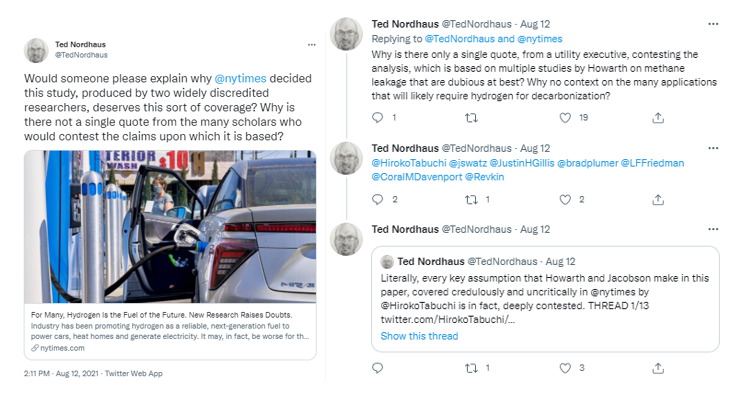 Assumptions and Falsehoods On Carbon Capture

Howarth and Jacobson claim “there is no experience at commercial scale with storing carbon dioxide from carbon capture.” But that’s wrong.

“Today, 21 large-scale CCS facilities operate worldwide, safely and securely keeping more than 40 million tons of CO2 from the air and oceans every year. In total, the world has managed more than 260 million tons of man-made CO2 this way.”

The U.S. Department of Energy is extensively studying advanced carbon capture technologies, and the oil and gas industry is committed to more wide-spread use of them.

For instance, earlier this year Exxon Mobil announced a project that would capture and store 100 million metric tons of CO2 per year or the equivalent to removing one in every 12 cars on U.S. roads.

In fact, the United States leads the world in CCUS deployment today with approximately 80 percent of the world’s CO2 capture capacity.

Natural gas is a viable, realistic solution to lower global emissions. The United States is a prime example of this.

Through the use of advanced technologies like carbon capture and storage, this is only going to become more of a certainty. And whether we’re talking directly using natural gas or using an energy carrier like hydrogen, building infrastructure today to be able to fully implement these solutions is key.

Research that explores that potential and analyzes data so that we can ensure we’re making progress is important and encouraged. But let’s have an honest discussion – and that’s not what Howarth and Jacobson’s study is, nor the Times’ coverage of it.