It has been one year since President Joe Biden issued Executive Order 14008 placing an illegal ban on oil and natural gas leasing on federal lands.

And while the administration held offshore Sale 257 in November, President Biden is the only president in modern history that has not held a single onshore lease sale in a given year. Interior has publicly available data on its website dating back to the Clinton administration in 1998 (see Table 14).

In that time, the decision has numerous and far-reaching negative impacts on consumers, states and local communities, and American energy security.

While the revenue from lease sales may not be the only revenue from this development, the amount distributed to states is hardly insubstantial. Bureau of Land Management data show that for states like New Mexico and Wyoming, the loss of total receipts for federal oil and gas leasing is in the tens to hundreds of million dollars annually. 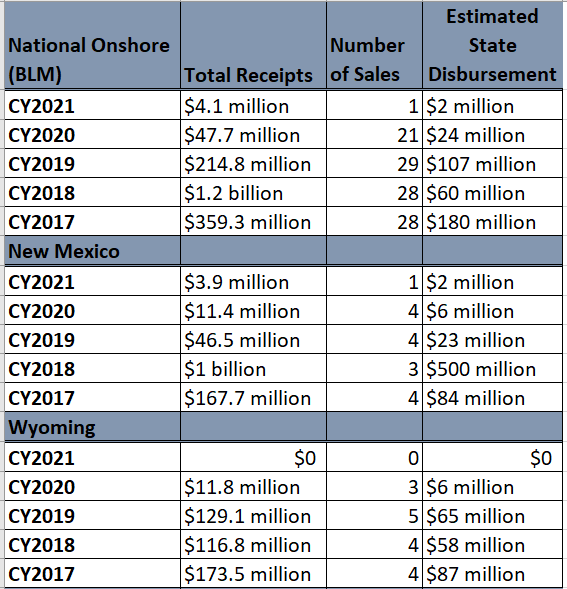 In fact, New Mexico – which is home to vast federal lands production and where the last onshore lease sale was held on January 14, 2021 during the last days of the Trump administration – received only  an estimated $2 million in revenue in 2021 after receiving an average of $153 million from 2017 to 2020.

Wyoming had no leasing in 2021, effectively dropping its revenue from sales to zero after averaging more than $54 million annually since 2017.

Similarly, Colorado, Montana, North Dakota, and Utah all received exactly $0 in 2021, after consistently receiving $1-$5 million over the previous four years.

New Mexico, especially, would be hard hit by a continued ban on federal lands. Recently, Gov. Michelle Lujan Grisham proposed dramatically boosting salaries for teachers and police officers, thanks to a budget surplus made possible by oil and gas revenues. As the Las Vegas Optic reported:

“Thanks to oil and gas revenues at record highs, there are ‘unimaginable financial resources at our disposal,’ Lujan Grisham said in her speech. … She said she hopes to raise educators’ salaries by 7 percent across the state, making New Mexico more competitive with other states in the region. … Lujan Grisham said she also wants to increase spending for the Department of Public Safety by 19 percent and provide state police officers with a 19 percent raise.”

But that revenue is dependent on continued leasing and production on federal lands.

The Biden administration apparently isn’t paying much attention to these revenue numbers and economic impacts, however.

In June, a federal judge in Louisiana ruled that the administration’s attempt to block production on federal lands while conducting a review of the leasing program amounted to an illegal ban, citing that it would take an act of Congress to change the laws that govern federal leasing:

“Although there is certainly nothing wrong with performing a comprehensive review, there is a problem in ignoring acts of Congress while the review is being completed.

“…By pausing the leasing, the agencies are in effect amending two Congressional statutes, [Mineral Leasing Act and the Outer Continental Shelf Lands Act OCSLA], which they do not have the authority to do.”

Despite this, the administration has yet to issue even the final notices for anticipated onshore sales, despite these sales having complete National Environmental Policy Act reviews and comment periods prior to being scheduled in 2021. The administration instead chose to redo all of that, while it simultaneously argued in federal court that the ban should be reinstated.

Further, the promised review of the leasing program that was the rationale behind issuing the ban finally published the day after Thanksgiving (despite the Interior Department repeatedly claiming that it would be published in “early summer”) but gave little insight into next steps.

This is the backdrop of energy uncertainty in America as rising energy costs are drive inflation and record oil prices drove up the average price of U.S. gasoline by more than $1.00 per gallon last year.

The administration appears to be catering to fringe activists whose version of a “just transition” involves stopping all federal oil and gas development, putting workers out of their jobs. In fact, rather than supporting clean, responsible domestic production, the administration spent much of 2021 begging OPEC+ to increase production to help lower prices here at home.

How long will it be until the administration resumes onshore leasing? We’re all waiting to find out.