With ballots hitting mailboxes this week, a new Consumer Energy Alliance (CEA) report adds to the already overwhelming list of evidence that passage of Proposition 112 would be devastating for Colorado. The report finds that low natural gas prices – made possible in part by record shale-driven state production – saved Coloradans nearly $12.4 billion from 2006 to 2016. 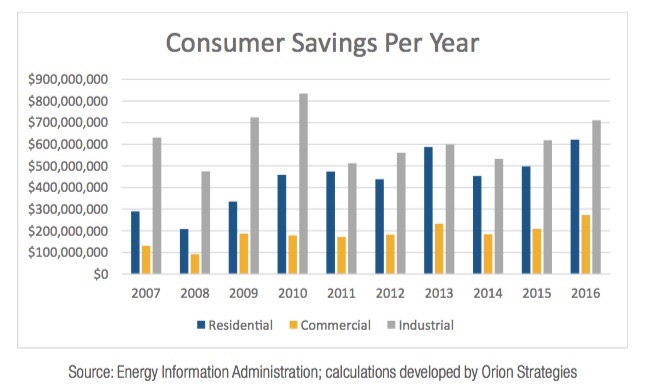 “Luckily, advances in horizontal drilling and hydraulic fracturing have lowered costs of, and increased production of natural gas across Colorado, allowing consumers to save almost $12.4 billion between 2006 and 2016. Residential users alone saved over $4.3 billion. Based upon current population estimates, this translates to over $767 per citizen.”

However, should Prop 112 pass, the report concludes natural gas prices would increase significantly, a development that would impact low-income households the most.

“On average, each Colorado resident spent $2,681 on energy needs in 2016. For the approximately 564,000 residents in poverty – that’s more than 10 percent of the state’s population – that translates to at least 22 percent of their income.”

“To give it some perspective, that is more than 564,000 men, women and children – enough people to fill Mile High Stadium almost 8 times.”

CEA also finds that affordable and abundant locally produced natural gas helped save the Colorado commercial and industrial sectors $8 billion from 2006 to 2016, driving jobs and economic growth. But the report finds Prop 116 – which would impose 2,500-foot setbacks that would all but ban new oil and gas development in the state – not only threatens these continued savings, but also the 232,000 industry-supported jobs and critical tax revenue streams fueled by the $31.4 billion the oil and gas industry generates annually in the state.

At risk are 56 percent of local tax revenues (totaling $200M) in the first year alone, and potentially $1B by 2030. The report also notes that 60 percent of school funding ($230.3M) could be lost over a three-year period, according to a State Land Board estimation.

“… [P]roducers contributed nearly $1.2 billion to state budgets via property, income and severance taxes in addition to public land leases and royalties – all of which helps funds municipal services including school, road maintenance, and safety. The State Land Board, for instance, has distributed $1.4 billion in revenue from energy development to build and support public schools over the last 10 years.”

As Denver-based CEA Executive Vice President Andrew Browning states in the report, Colorado’s home-grown emergence as a major oil and natural gas producer in the United States – and lower natural gas prices it has yielded – is being threatened by national “Keep It In the Ground” groups backing passage of Prop 112,

“Colorado has fast become one of America’s leaders in safe, economical oil and natural gas production, rejuvenating communities statewide and helping families and businesses of all sizes reduce expenses, growth and prosper via abundant sources of locally-made, affordable energy.

“Yet anti-development activists, funded by organizations from out of state, are threatening our way of life by trying to eliminate the production and transportation of these safe, affordable resources despite Colorado having the strongest air and water regulatory framework for oil and gas production in the nation. Their efforts threaten the environment and offer no realistic solutions to how we meet growing consumer demand, fund much-need municipal services and reduce costs for those who need it most – all key points voters must keep in mind when they cast their ballots in the coming weeks.”